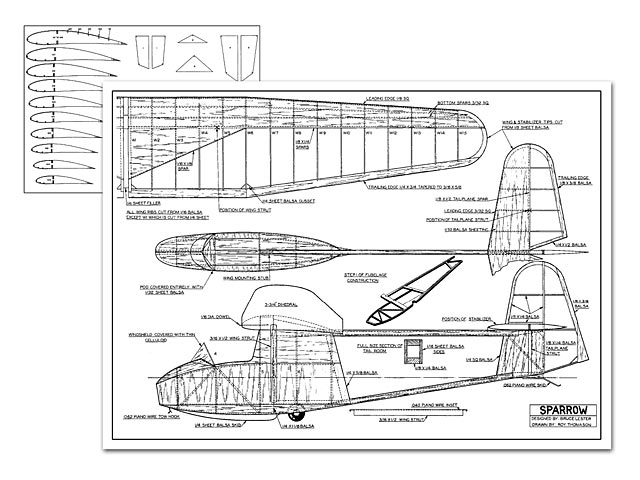 Quote: "THIS aircraft was first conceived by a Polish designer during the early war years of 1941, and the completed aircraft turned over to the DeHavilland Gliding Club in Canada for training purposes in 1942.

It incorporates the best of Polish design at this period and is really a remarkable machine. Though only of an advanced secondary glider type, it has soared for several hours at the hands of skillful Polish glider pilots who, along with the designer Mr Czerwinski, were successful in escaping from Poland and making their way to Canada.

The author obtained both A and B Gliding Certificates on the full scale brother of the model we are presenting, and also has the qualifications for C category, to say nothing of experiencing several air tows.

By following the plans carefully, you can build without too much trouble a very fine sport type glider suitable for towline launching. The catapult launch method commonly used in England is an even better system. Use about 25 feet of 1/8 in rubber and 75 feet of cord and have some real fun some sunny afternoon on the top of a sloping hill.

But let's get at the construction. Enlarge the model plan to full size; this makes your model slightly over 5 ft span. If you care to decrease the scale for a smaller machine you can easily do so from information supplied.

Fuselage: First step is to lay out a balsa crutch of the side view similar to the way you would make a side frame for any model; just make one as illustrated. Don't forget to add the packing blocks at top and bottom positions where booms join nacelle pod, and again where they pick up rudder and tail surfaces. With balsa crutch still pinned to an absolutely flat board, cut out all fuselage formers from 1/16" sheet balsa and add each half former at stations 1 to 6 as indicated. Now add top and bottom stringers.

It is advisable at this stage to sheet the entire half pod and the boom as well with sheet balsa, size and thickness of which is clearly given on plan. Before removing from the board, it is best to add the vertical rudder post and build on the en-tire rudder. In this way you get a model of perfect alignment. Be sure the frame-work has been allowed to dry, preferably overnight, before removing it from the board.

Clean off all excess glue and wax paper which will have adhered to the frame if you have used the glue as liberally as you should. Add the remaining half formers, and finish up the sheeting and cockpit detail.

Use any type of landing wheel available and don't fail to install the skid that precedes the wheel. This skid should be carefully chosen of hard balsa or pine as it absorbs most of the landing shock. Sand the whole fuselage thoroughly and cover with whatever color tissue you have, preferably orange for visibility. Paper the booms by winding and doping with strips of Jap paper as you go along. This makes the booms tough and rigid.

Wing and Tail Surfaces: Ribs are cut from 1/16 thick balsa in the usual manner, being careful to number them properly, especially Nos.1 to 6. Refer to top diagram of the wing, you have drawn up and you will notice that the top notches are made to vary on each rib due to the 1/16 x 1/8 spar which passes through them at an angle. Be sure to duplicate this angle quite accurately as you notch each successive rib Nos. 1 to 6. The root rib should be of harder balsa and of high grade wood as there is considerable strain at this point.

To start wing assembly, pin to wing plan the trailing edges, then lay a spacer 1/32 thick over the plan before pinning down bottom main spar. This spar should he of carefully chosen hard balsa. Now add wing ribs (the spacer strip will allow for the small curvature of the airfoil, and the front of the trailing edge should be raised slightly to assure a perfectly shaped wing.) When satisfied all is in order, add top wing spar of hard balsa, also top sheeting of 1/32 thick stock after you have added the wingtips. When all this has dried thoroughly, remove the wing, panel and add bottom stringers and sheet. Make opposite hand panel using same detailed procedure.

With this much done and the wing nicely sanded, join the two wing panels with a balsa filler block and at the same time glue in the necessary 3-1/4 in dihedral..."

Quote: "this is Bruce Lester's Sparrow Glider published and scanned directly from my issue of Model Airplane News May 1947. It's a rare scale glider and looks like it would be a good flier... enjoy, jeff"