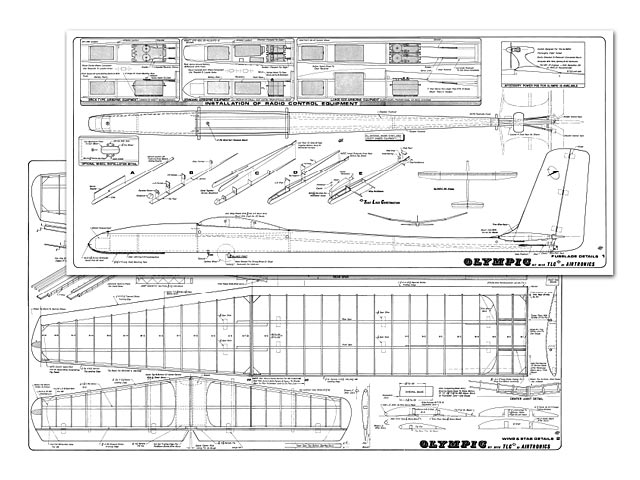 Quote: "I just finished scanning my Dad's old Olympic 99 plans and creating PDFs for a fellow who asked for them on RCG. Thought they would be a welcome addition to your collection. Kind regards, Stan."

The Olympic 99 kitted by Airtronics - there are no superlatives which would adequately describe this fabulous airplane and the LRB (Little Red Brick) radio produced by EK Products Corporation. What a fabulous combination.

Let's go back to the beginning and tell it like it was. Shortly before my sojourn to the Glider Nats (RCM Oct 71) I received a prototype of the Olympic kit. The designer, Lee Renaud, sent a note of apology for the 'blue line' plans, no instructions and so forth. It was wasted effort because when I opened the box I could plainly see that here was a vastly superior kit. I built this sailplane with great ease, went straight to the flying field where I flew it with great ease, then called the pseudo editor of this disguised racing sheet and raved, and raved, and raved about it.

The result came in the mail a few days later in the form of a production run kit of the Olympic. Being a real fair minded person I felt it would be quite unfair to have all the fun myself, so I bribed my friend (a newcomer to RAC) Steve Wood, into building this one. He had hardly left till he was back with it, so this column will combine our views. As a result of the good publicity this plane has received there are about 10 or 12 Olympics here in the Omaha area now. I have had everyone on the flying field fly mine (this includes wives, girlfriends, moms, and dads of RC'ers as well as the RC'ers themselves) and the Olympic has won them over with its own merit.

Not long after this occurred I had an opportunity to go to LA and gape in awe at the incredible efficiency of our editor. Pat Crews and her staff —all being able to get the magazine out on time and maintain order while having to cope with the undisciplined orangutang you and I know as Dewey (really the wastebasket emptier!). Anyhow, while there, I enjoyed a short visit with Lee and his wife and had a firsthand opportunity to observe part of what goes into the making of this wonderful kit. Friends, and fellow RC'ers, I'm here to tell you things are looking up! These people have joined the manufacturing ranks on a very high plane. Don't take my word for it, go see for yourself straightaway to the dealer and ask to see an Olympic kit. Open the box and examine the contents. Imagine the work that goes into producing such a superb kit. Don't forget to thank the Renauds for making it possible and I'm sure the dealer will thank them too because quality like this comes so seldom that it sells itself.

For those of you who are reading this article for interest and don't have a 'rig' yet you can buy an LRB for $ 119.95 and an Olympic for $29.95 - your choice of finish or covering and be in the air as a success-ful pilot! No hidden extras.

When you get home and open your Olympic box you will find it includes everything except covering and glue. This means no annoying additional trips to the hobby shop for such things as pushrods, horns, towhooks, skids, hardware (every necessary bolt, nut or screw is provided) and even the rubber bands are included!

The pushrods are the new 'golden-rod' flexible nylon (tube within a tube) type and you've got to use them just once to be able to appreciate them.

To build the fuselage you simply glue the spruce doubler strip on each perfectly cut side, glue the ply to balsa bottom in place, then add all four formers, noseblock and sides in that order. Slide the outer tubes of 'goldenrod' through the pre-drilled holes, glue in place with contact cement, add the top planking, crosspieces, stab rest nose block (also pre-cut) and dowels and presto - fuselage complete! I suggest that if you plan to use Solarfilm or a like product don't glue in the dowels and stab rest until after covering.

The rudder needs only to have the edges rounded. The stab is built by first placing the four 1/4 in square jig strips as shown on the plans, slide the ribs onto the spar in proper order after you've tapered it at the tips, align them, then glue and pin in place. Add the leading edge, trailing edge, and tips in that order. While it is drying, add the spruce capstrips to the wing spars as shown. When dry, remove the stab, add center section planking and sand the leading edge and tips.

The wing construction is really self explanatory! Place the spar shims in place as shown on the plans. Locate the spars, add ribs, trailing edge and leading edge in that order. Glue it as you go. Do this four times (4 wing panels) and, if your timing and sequence is right, you can block up the tips and build in the polyhedral as shown on the plans. One note we'll add here - when epoxying the tubes onto the main spars wrap the assembly with strong thread. After you are satisfied with the anti-dihedral fit, add the planking and sand the wing for covering.

Cover the plane with your choice of materials following the manufacturers instructions, then assemble the fuselage, wing and tail. We used the EK Little Red Brick, so place the battery as far forward as possible, the radio unit likewise, then check the balance. The name of the game is balance as shown on the plans. Small pieces of foam will secure the battery and four wood screws into two soft pine rails will secure and shock mount the receivers - yes, I know there's no vibration in sailplanes, but you should see the landings (impacts) Dewey makes!

With the balance exactly as shown on the plans, and the towhook likewise, and if there are no warps, you're in for a fabulous flight whether by winch, Hi-Start, or slope launch. So have fun and try not to sneer quite so noticeably when you look at a kit of lesser quality!" 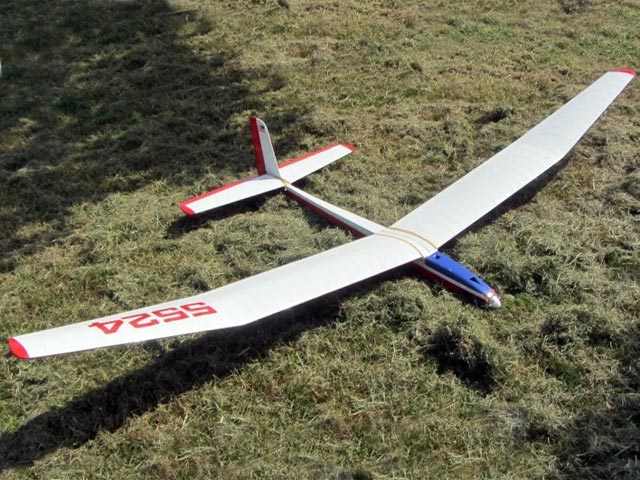