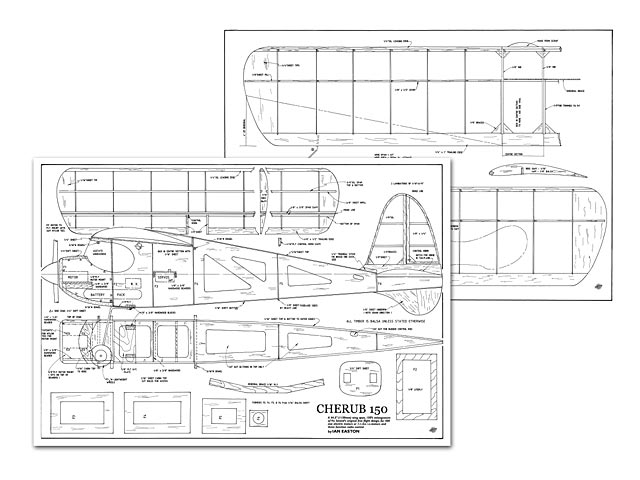 The origin of this model goes all the way back to the September 1952 edition of Aeromodeller, where a very truthfull review of Vic Smeed's attractive, free flight Cherub (oz3841) was published. One black and white picture and a brief half page of instructions were all there was to go by for the would-be builder.

My own, personal story of this model goes back to 1978. I was a young lad, this was the first engine powered free flight model I had ever built and having never actually seen a powered free flight model fly before, I didn't know what to expect. I remember filling the fuel tank up half way, starting up my trusty DC Super Merlin diesel (the 'super' part being a red anodized head and spinner), and pointing my Cherub skywards.

To my amazement, it flew perfectly. It spiraled way up and I began to worry about how much fuel I had put in. Then the engine cut, the model dropped a few feet and settled into a large circular glide, drifting downwind. I was truly stunned - I was hooked. I had many more flights from that model and chased it over many fields.

Quickly I realized that the success of this model was all due to Vic Smeeds well thought-out design and certainly not from my building skills at that time. I can't remember what became of that particular model, but in 1982 I built another. Using that very same diesel engine and a better-built model), I repeated my success - only this time, after what were easily 150 flights and a couple of days missing, I retired my Cherub and hung it in my garage.

To date. 1999 rolls along and I discovered R/C electrics. I built a few scale models, a couple of foamies and an electric powered glider, but niggling at me always was my Cherub, lookng down at me from the ceiling. Something had to be done, Another had to be built.

So something was done, and the result is what you see before you today. Initially I wanted to build it as the original, but at 30 inch span, with sheet balsa fuselage and only 150 square inches of area, I would have to make it really light and fly it in fairly light conditions, What I really wanted was something that was tougher than a park flier, could be used as a trainer: still as simple to build as the original and be able to handle landing in some of the rough fields that I fly from, yet still keep the look and feel of Vic's original design.

So, after some calculations, I determined that a version 50% larger would fit my size requirements. A geared speed 400 motor on seven or eight cells would handle the power and some modern lightweight radio components would handle the guidance system. I also kept the original type of construction with only minor modifications to the struc-ture. As for the landing requirements -I modified the design to have a bit of suspension - that way I could hand launch and land at my rough flying sites.

Flying. Of the hundreds of articles I've read about models over the years, the first part I always read is the part about flying. So, if you're like me and prefer to do that too, you can start at the beginning of the article this time, instead of at the end!

Before you fly your Cherub, check it over thoroughly, paying particular attention to any warps that may have crept in and most importantly, make sure she balances as shown on the plan. She will hand launch easily with a bit of up trim, but I like to do ROG's.

Gently open the throttle to get her rolling and then slowly advance it to full using rudder to keep her tracking straight. The tail will rise up after a few feet and once speed has built up a bit more, she'll gently lift into the air. She will climb quite steeply to altitude and then can be throttled back to cruise around. I even turned the motor off end went looking for ther-mals on my first flight, powering up again when I needed altitude.

She is quite sensitive to rudder input, so go gentle with it. With all that dihedral she has, she turns quite sharply, so if you get into any trouble, just centre the controls and she'll straighten right up. Don't forget her origins in that she was designed as a stable free flight model.

Loops should not be a problem - I just haven't ventured there yet. Stalls are uneventful, the nose just dropping down straight-ahead. Cruising around is where she looks her best. She can be flown with about one-third to a half throttle and kept in close, which makes for very relaxing flights. This reminded me of those youthfull days chasing my original free flight ver-sion.

For my initial flight, after five minutes, it was time to bring her in. She glides fairly quickly, so a long flat approach makes for a nice landing. Use the throttle to control the descent, then cut the motor off just before touch down, With a little up elevator, she'll drop down nicely. In my case, the grass being a little on the long side, the undercarriage folded up and she bellied in - no damage done whatsoever, the landing gear doing exactly as I had planned.

Time to charge her up again and go thermal hunting, maybe I'll try another prop and see what happens!

Now that we've got the flying part out &the way, it's time to start building one of your own. She really is simple to build and here's how.

Fuselage. I like to start with the fuselage. I find it the most enjoyable part of the build-ing process and, if I want to see it fly, then I have no other choice but to build the wings! The Cherub fuselage couldn't be simpler. Cut out two sides from 1/8 x 36 in lightweight balsa and cut out the formers F2 to F6. Cut out all the light-ening holes..." 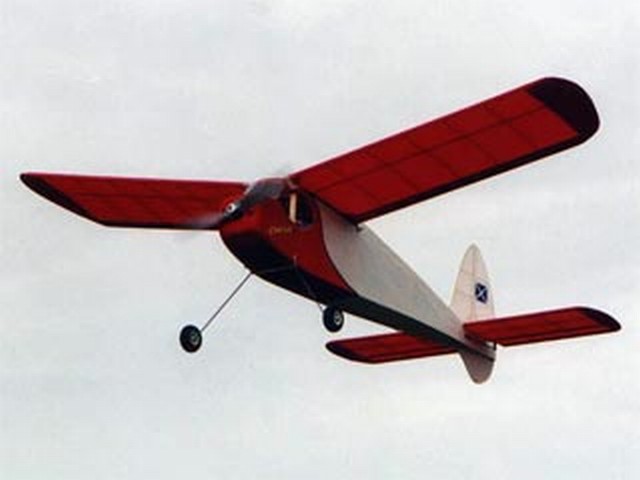