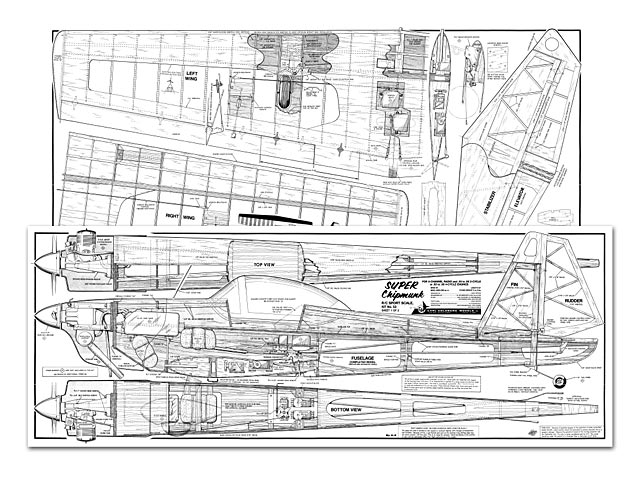 Quote: "Carl Goldberg's Super Chipmunk. Destined to become another company classic this one has 'flyability' and 'buildability' and more. Review by Bob Boswell.

Designed for a .60 2-stroke or .90 4-stroke, the Goldberg Chipmunk is an excellent choice for that same novice who is ready to step from a high-wing trainer to a low-wing aircraft with more pronounced aerobatic capabilities. Priced very modestly, Goldberg still manages to include all the necessary building jigs, pre-formed wheel pants and fairings, cowl, decals, clear canopy (with a cockpit kit), and a complete hardware package. The instruction booklet is one of the most complete I've ever seen, explaining every step in detail with well over 100 clear photographs to aid construction. And don't let me forget the equally detailed full-size set of plans.

Construction notes: Construction begins with the tail surfaces; each of these structures are built up from 3/16 balsa, then covered with 1/16 sheet to yield a very light but strong tail section. The rudder and elevator are built using 5/16 stock, but left unsheeted. 1 also counter-balanced the elevator by burying some lead shot in the tips to eliminate any chance of flutter during high speed maneuvers. While assembling the fin, I found a small mistake in the plans. They called for a 5/16 balsa leading edge, but it should be 3/16. However, I later on discovered a small note enclosed by Goldberg identifying the mistake. It definitely pays to thoroughly examine the contents of the kit before beginning.

Wing. The wing is built in a very typical manner, by first laying a spar down over the plans and adding ribs, leading and trailing edges, and top spar. My assembly went very quickly, as all the die-cutting is crisp and precise. Even the pushrod holes and servo tray mounts are cut out. You have two options for the landing gear, fixed or retractable, and both are shown on the plans and in the instructions to eliminate any guesswork. I chose the fixed version as the wheel pants seem to highlight this type of aircraft; however, I did opt to add the flaps which only took an additional hour to hinge and to then install the torque rods.

Joining wing halves can be difficult sometimes, especially if they have a symmetrical airfoil. Not here, though. Die cut wing supports make it almost impossible to misalign the panels during the mating procedure. Before adding the ply joiners to the center of the wing, check the fit to insure that they are flush with the spars. It will be much easier to sand the joiners before gluing them to the spars..."

Update 14/03/2021: Added kit instructions, thanks to Pit. This is complete at 35 pages with highly detailed build steps and hundreds of pics. Also includes parts ID sheets (at small scale) on pages 4, 5, which could perhaps be used as a starting point for someone to draw up in CAD a full size parts sheet? 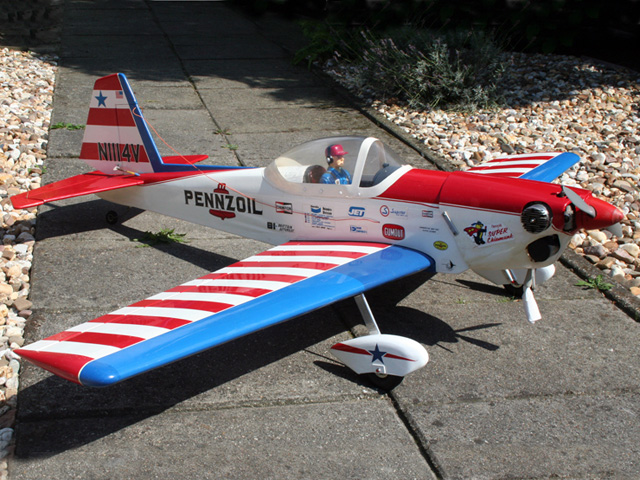 Hi - where are the fuselage formers layout prints? Thanks!
Todd Rice - 14/03/2021
It's a kit plan, so most likely there never was a parts sheet. Just the parts themselves, in the box. This plan is tagged as 'formers unchecked'. The good news is pit has just sent us in the full instructions today - see update - so a parts sheet is now one step closer.
SteveWMD - 14/03/2021
Hi, Hereby a few pictures of my Carl Goldberg Super Chipmunk [main pic, 005-007]. OS Max .61 FS for power, central single servos for flaps and ailerons as per plans. My favorite weekend flyer! Here's an older video of my Carl Goldberg Super Chipmunk: https://www.youtube.com/watch?v=GDvpaCjHuJ8 Cheers,
Ramses de Looff - 28/07/2021
Just wondering if you have a parts sheet for this C/G chipmunk yet.
Brad - 28/10/2021
Add a comment