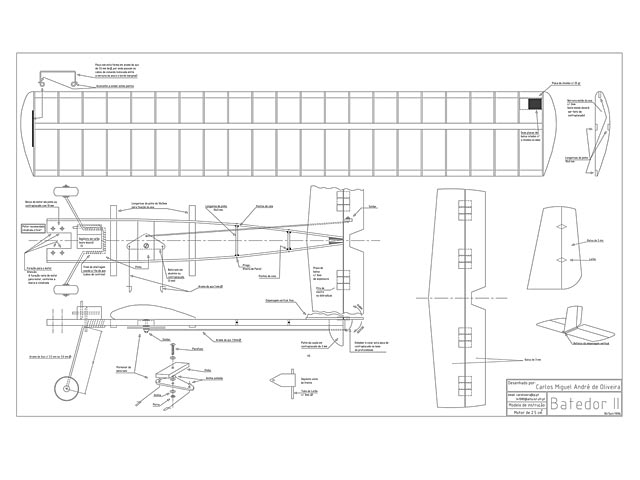 Dear Steve, Happy birthday Outerzone! Congratulations for this great website! I really appreciate it a lot! I'm sending you the plans for building an almost indestructible C/L trainer I found at http://www.ultraligero.net/Aeromodelos/B/BATEDOR.pdf The model is now named Batedor II (Pathfinder II). I say 'now named' because her name was once Cegonha (Stork). In the early 70s the Portuguese television, RTP, had a program about aeromodelling and RTP would sent Cegonha's plan and other 3 C/L plans, a more advanced trainer, a combat wing and a stunter, by mail for free to whoever ask for it. Cegonha was delivered printed on two sheets of paper, one for the wing the other for the rest. On those days, I was 11 or 12 and I built a couple of Cegonhas myself and I had lots of fun in return, quick to build, easy to repair, and very forgiving once in the air. I don't know who the authors of those 4 models set were. What I know is the presenter of the TV show, later renamed Cegonha to Batedor and the plan could be bought at his shop in Lisboa, this time printed on one sheet of paper only. The shop closed more than 35 years ago... Thank you! Best regards, Rui Fonseca. 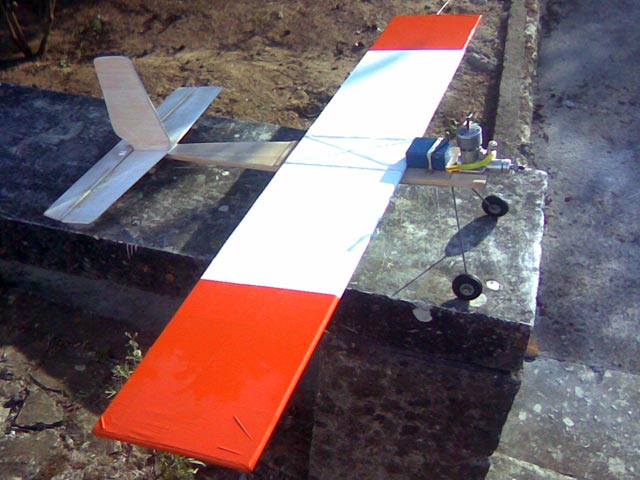 Hi Steve and Rui - First, let me also congratulate all about this great website. Finding 'Batedor II' plan brings me very good memories, many of them having more than 20 years now. I would like to take this opportunity to give some additional thoughts about the history of this plan, as I was the author of the digital design back in 1996. As Rui Fonseca already described, the history of this model is linked with a TV program broadcasted by the Portuguese Television (RTP). A program aimed to promote this fascinating hobby among the Portuguese youth. Rui already talked about the program broadcasted in the early '70s (which I had no chance to view), but in fact there was a season broadcasted in the mid '80s, where one of the models presented was the 'Batedor II' as it is on the plan (including the name). There was also a very nice RC warship corvette in balsa among others. RTP would mail for free the plan to anyone who request. At the time, I frequented a hobby model club/school, where in fact the presenter of that TV program was the club responsible and the modelling builder assistants were the club member students. Some of the models used on the club to teach building skills were those ones later showed on that program. This club belong to a division of the Portuguese Youth Institute - IPJ, a public institute that at the time promoted many hobby groups (modeling, theater, chess, etc). The modeling section vacated in the early '90s. The digital design of 'Batedor II' plan you find here was based on a real scale blueprint plan mailed by RTP, received as per my request at the time program was broadcasted. I still own that original blueprint and mail packaging envelope from RTP. I guess, in some years it will be part of history. At the time I was around 14, I built a couple of these C/L planes and like Rui, also had lots of fun in return. And all are still intact (but not flying anymore). At a certain point, I felt that it would be a shame to lose this great plan, so I've created the digital version of it (and some others I also still had with me) and shared on my personal website that does not exist anymore. The design was done in AutoCAD in real scale and accurately reproduced the original blueprint. It was delivered as a ZIP package containing the following files: Autocad DXF vector format, Portuguese to English text translation, author and plan history. It did not include any PDF version. I hope that is still giving the real scale. I can provide the original package to anyone that asks. I was really happy to see that after all these years the Batedor II plan was not lost. Even more happy with your initiative providing this great repository. Cheers.
CarlosOliveira - 24/05/2016
Hello, I'm attaching some photos of this Batedor II trainer I've built some 10 years ago [model pic and more pics 003]. At the time I didn't make a built-up wing, but a simple plank one. Very nice plane. Best regards,
Franciso - 02/02/2020
Hi there. This is not the Batedor 2 it is the original Batedor. Batedor 2 had some design changes aimed at correcting some issues with this design. The design changes were: the horizontal stab was mounted in a 20mm balsa block base so that it was liftted up and no longer in the same plane as the wing, therefore improving its efficiency. The other design change was swapping the large vertical fin with two small vertical fins at each side of the stab. This was a big improvement as a novice flier would often flip the plane over when landing, thus breaking the thin vertical fin. The plane is rugged and easily built. I learned to fly C/L with it. I recommend it to everyone who wishes to have a go at C/L. By the way, The portuguese TV show was called "Desporto e ciência" (sport and science) and was hosted by Prof. Saphera da Costa. Cheers
Luis Oliveira - 21/07/2021
Add a comment