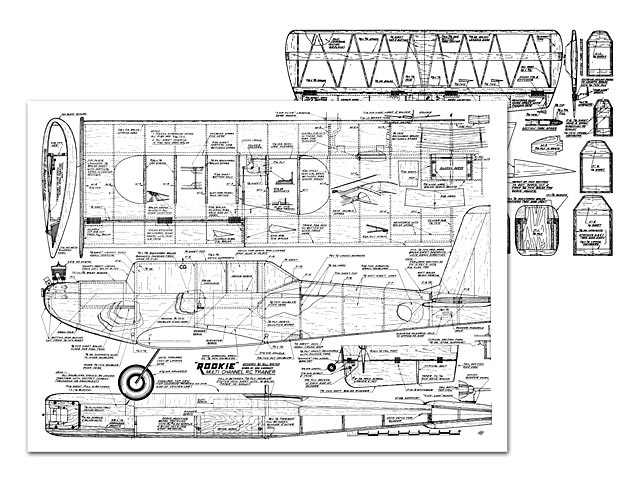 Quote: "Thinking of multi RC for the first time, think your rections are too slow, think you would like some calm, peaceful multi-flying for a change? Then think real hard on our trainer as it offers all this and even more as our author, real oldtimer in radio, had the same need.

JUDGING by the initial reaction of innocent multi fliers seeing this Nigerian T-6 for the first time, we have some explaining to do. Overheard remarks in subdued voices usually vary from: Do you suppose it flies? to: Those ailerons will never roll it!

While our best sales story is that it was flown by a big old man with bifocals, which should prove something or other, this crate does possess interesting and worthwhile capabilities - and science and design have little to do with it.

Having flown one of the kid's multi bombs (see MAN September) - he'd put it up and we'd steer it around and not much else - it was quite evident that the old man required a safe flying machine tuned to his reaction time and which could be landed without splintering cartwheels when a tip dropped close to the ground.

The objective in the beginning was simply a safe and easy flying airplane that could be kept in one piece. But, as so often happens, the least scientific and reasoned designs often turn out better than the skull-breakers.

Perhaps we should state, first, what we did to the airplane and, secondly, what the airplane did for us. Bob had stretched out a Cosmic wind through a succession of ships until all traces of the deBolt ancestry had disappeared (though the Cosmic wind still brings a shine to his eye!) So we took Bob's last one and streched it again, gave it a new profile - how can you be different? - and sundry hidden features.

Approaches and landings being the chief obstacle to our attempts to get into multi - most aerobatics are noth-ing but stick pushing anyway — we came up with a six-foot wing with just over six square feet of area. The air-foil is thick and it is a zip - apparently NACA couldn't have done better. The tip plates were put on in the hope they would help delay tip stalls (ship never stalls a tip) in slow approaches when you have to stick out an aileron.

The combination of differential-action ailerons and large vertical tail probably have something to do with this. The differential action (nothing new, true) is obtained by locating the horn hole well aft of the hinge line. This results in much more up than down aileron. (The idea was taken from the Blackwell 600.) Down aileron causes the off-center drag which shows up as yaw. While the big fin helps compensate for this yaw, the use of differential action goes a long way to balancing out the drag of both ailerons in the full-control position.

The two-wheel gear is crazy wide because Bob, not knowing better, went in for super-wide gears. And he had something. Two wheels, incidentally, are a lot cheaper - and lighter - than three and, if you are not a contest hound, why bother with three and all that work?

With an Orbit 8 originally installed, weight came to, 6-1/2 pounds; somewhat heavier with the present Controlaire 10. And here, we wander to note that it is trim, more than anything else, that separates the men from the boys. For training and sport, trim can complicate things plenty!

What did the airplane do for us? Right off the bat we could perform consecutive rolls, even getting the down roughly where it should be, could fly inverted, and land right side up all the time. The phenomenal thing is that the ship can be slowed down until it hangs, and it will never drop a wing. In fact, you can perform altitude killing little turns, almost up to the landing spot at very low airspeeds. Takeoffs are auto-matic with uptrim in grass that traps the nosewheel jobs. And we can't fault our old K&B .45,

Despite the low dihedral, 360's can be done (shallow of course) on rudder alone, and wide figure eights. On one occasion when the transmitter, peaked too much in the tuning, went out of oscillation, we were lucky enough to get rudder - but nothing else and don't ask why - whenever called for and got the ship down hard but safely.

The ship has soared in the glide and, with uptrim, will float better than many rudder jobs. (Nice if you panic!) The fact that it happens to be a low wing - and with only 3 degrees dihedral - apparently has no ill effects on safety. It came as a surprise to us that the Rookie is as docile as any shoulder wing or cabin job - and, of course, a low wing trims as well as the shoulder jobs, better than most, and much better than any cabin configuration.

What was altogether unexpected was the ship's aerobatic ability. It is no Orion (oz927), or even a Stormer (oz5794), to be sure, but size and bulk appear to have relatively little effect on its stunting. In some respects, the lighter wing loading —- a good pilot can do beautiful wingovers - gives it an advantage over generally better contest types. Approaches are string straight and business-like despite the large area and floating abilities..." 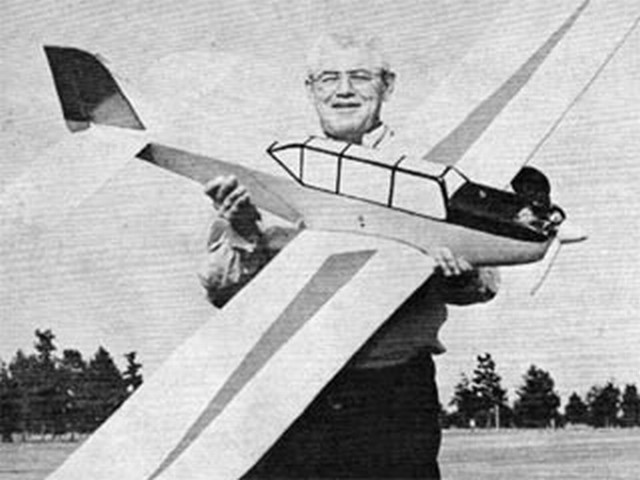 Prophet by Dave Robelen oz plan 3120 seems to be a reduced version for .020 engine.
Pit - 14/04/2016
I lusted after this model back in the day. Having just graduated from high school (barely), I was working six days a week at a gas station, no possible way I could afford the required reed type radio system needed for a low wing model with ailerons. I could just manage to fly a single channel model with escapement control that already knew how to fly, you merely interrupted its flight path and celebrated a smooth landing within walking distance. The reed systems I saw at the time worked, sort of, but were a lot of trouble even for experienced modelers. None of the transmitters had any screws holding the back covers on. That's because you had to frequently adjust the tone pots inside to get the reeds to work properly in the receiver, compensating for changes in temperature, and maybe the phase of the moon for all I knew. It was all black magic to us at the time. You couldn't buy a complete reed system ready to fly and just plug it in and go. Noooo, the receiver didn't come with connectors, you were supposed to supply your own favorite type and laboriously solder multiple wires to each servo. Most modelers used the popular Deans connectors (yes, the same company that makes the red plugs used for electric power today). And they weren't any easier to solder than today's Deans connectors, just smaller. As it is today, soldering skills were learned the hard way, requiring you to search out some local guru to solder your maze of wires before your system would work. Nicads were just coming into use, all arriving loose in a box, meaning you had to solder more wires AND an on/off switch to get power to the receiver. Then there was vibration to contend with, sometimes causing the tiny reeds to vibrate in unison with your engine rather than responding to radio commands. A new model test flight always included testing the system for vibration while being held loosely by the wingtips, engine running to make sure no vibration got to the reed bank. I can't believe we put up with so much Bravo Sierra, but it was the only game in town.
DougSmith - 14/04/2016
Steve - Here is a scan of the MAN article that goes with the Bill Winter Rookie (ID 7611). This has been on my want list for many years - might be time to get to it. Thanks for your great site.
Mike - 15/04/2016
Add a comment