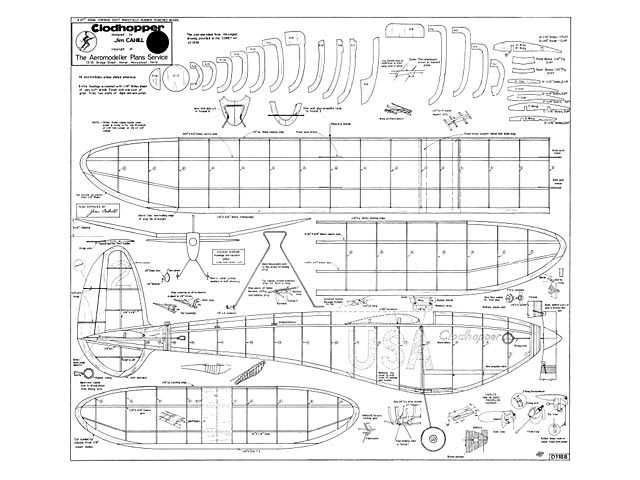 Clodhopper. A 1938 Wakefield rubber competition model. The Clodhopper II (oz2829) first appeared in Air Trails. This here is a later redawn plan that appeared in a nostalgia article in Aeromodeller 1973.

Jim Cahill's thermal hunting Wakefield, which made history at the French contest. Jim was a leading protagonist for the streamlined form and the single blade folding propeller. Our plan is of the kitted version with two-blade prop and does not have the castellated tail cone joints as in the original, seen in Le Models Reduit d'Avion plans of September 1938. The plan is taken from the simplified version produced by Comet (USA), to whom acknowledgement is due.

1938 - SO AMERICA regains the Wakefield Trophy - by means of one flight, timed by the use of binoculars and one in which the model at the end of the motor run came within a few feet of the ground and then was lucky enough to strike at the edge of the 'drome a thermal on which it soared to a height of some thousands affect and eventually passed out of sight! Well, it was all according to the rules, and none can grudge Cahill his win. We congratulate him and the whole American team on their entries. Cahill's model was mainly interesting because af the single-blade folding propeller; whilst well made, it was easily bettered by a number of other competitors' models as regards general neatness of workmanship and attention to detail.

THUS REMARKED the Editorial page of the September 1938 Aero Modeller, commenting on the Wakefield International event staged at Guyancourt on July 31st of that year.

Undoubtedly, Cahill's success on that occasion was favoured by Lady Luck, but it would be unfair to dismiss this designer and Clodhopper II, quite so lightly; it was obviously a successful thermal riding machine. It was also a departure from the normal American approach of using 'square' or 'box' fuselages - indeed he followed the British line of thought in building a 'streamliner'. Even experts such as Korda still used the box type of Wakefield - believing that under the then current rules (whereby contests were won by the best out of three official flights), a competitor only had to depend on one good flight. With abundant thermals present in their part of the US, it seemed that the extra effort involved in building a 'streamliner' was unnecessary, as the chance of flying in absolutely 'dead-air' was remote. We British however, living in a far less favoured area weatherwise, had for many years been following a lonely trail along the 'low drag' path, and the Americans conceded that in still air, the British models had a superiority of approximately one minute.

Rushed to completion in June 1937, it was first test flown on the morning of the Moffet and Wakefield Eliminations, and on its second flight, late in the afternoon recorded a time of 13:45 to earn a place on the American team. The very next day it flew out of sight after 15:05 and was lost, to be recovered some four months later. Extensively repaired and recovered, it was then flown in a local contest where a 6:30 time from its first flight in cloudy weather secured first place. At the Nationals of next year, Jim needed a second flight to record another OOS flight, this time the model being watched for 22:10! A month later he recorded that lucky flight of 32.01 in France.

He was less fortunate in the next National Wakefield Eliminatory, when following two repairs to the wing in previous flights, he eventually recorded 8:15. Thus the net result of six contests was four first places, one sixth and one seventh - not a bad achievement particularly as he was only forced to make a second flight on two occasions!

The last competition which Jim contested with Clodhopper II was the Scripps Howard Nationals, when during a short test a thermal snatched the model from an altitude of 50 ft, and 15 minutes later the designer had his last ever glimpse of the model which had served him so well.

As for the design itself, this was the first model which Cahill built to the then new 'eight ounce' rule, so he had little idea of how such a model would climb or glide. He decided to concentrate on perfecting the latter aspect, From experiences of his fellow club members, he reckoned that short moment-arm gliders flew better in thermals, so he decided on a short fuselage, putting slack in the motor if a longer power run was found necessary. A deep fuselage was employed to aid visibility, while the wing was mounted through the fuselage, not on top, in order to gain more effective wing area from the specifications. The wing was in fact mounted as low as possible without fouling the rubber motor. Viewed from the front, his aim was to have the wing, tail and centre of resistance as close together as possible, believing this to make for the best soaring qualities.

The rules required a certain minimum fuselage cross-section, so the belly was stretched downwards in order to make the landing gear as short as possible, both for structural and drag-reducing reasons, Also in aid of reducing drag, a piano wire undercarriage was substituted in lieu of the commonly employed bamboo.

Aft of this 'bulge' in the fuselage, the tail portion was reduced as far as possible in order to save weight, although it had to be large enough to accommodate large knots of rubber motor. A planked balsa fuselage with varying sizes of formers seemed the only answer to this problem, and great care was taken to select really soft, light, wood for this task - in fact the finished weight of the fuselage was only marginally more than its traditional 'stick and tissue' counterpart, while the strength was considerably better. The fuselage was finished with one coat of grain filler, two coats of dope and was then wax polished to make it as smooth as possible.

Jim wanted the wing to be both easily adjustable for incidence, plus able to absorb landing shocks while buried inside the fuselage, so a sheet aluminium fairing, retained by adhesive tape, was fitted over the wing: later bonded paper was used as it was easier to handle and replace. Wing and tail surfaces themselves were straight with long elliptical tips as he deemed it more important to obtain a good uniform airfoil than to worry about efficient plan shapes. " 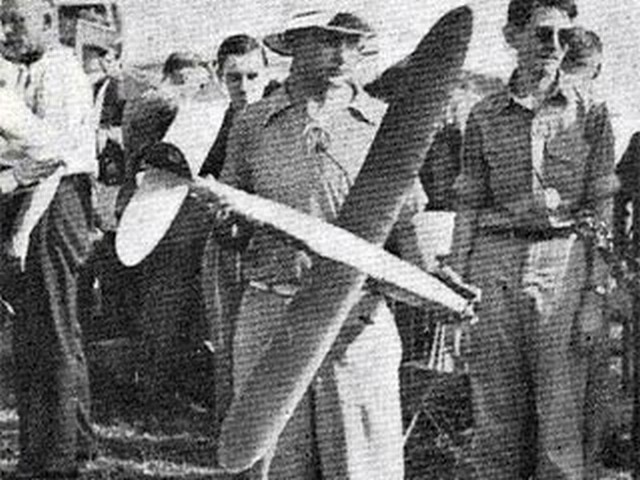