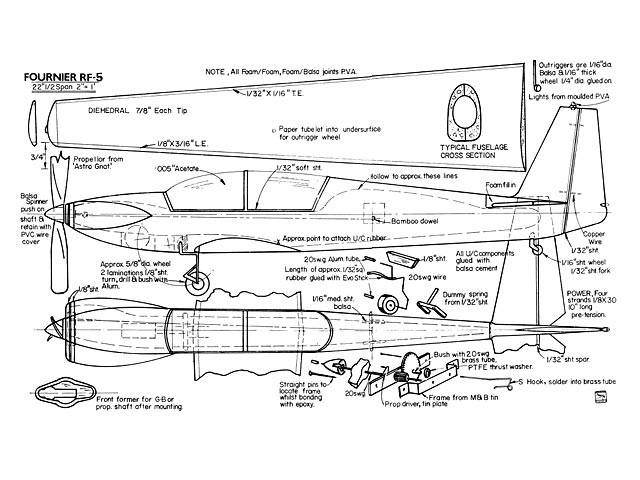 INDOOR FLYING SCALE models must be very light, and this means that usually only a minimal balsa structure with tissue covering can be employed. Except for certain very early aircraft prototypes, scale appearance usually suffers if a reasonable performance is required, as few modern aircraft have translucent coverings, and metal and plywood covered prototypes are really impossible to simulate.

Because of local competition rules (scale placing plus flight duration placing; lowest mark wins) I needed a model that whilst placing high in the scale section would also have a good duration and which could easily be documented for SMAE event. The Fournier RF5 powered glider having been featured in AeroModelIer (see Plan Pack 2950, price 55p) and also being a 'current' type easily photographed, seemed to hold out promise; and this has been borne out in practice, winning the February 1974 Liverpool DMAS, SMAE Scale event, and finishing second in the 'Keyhole' scale event; both on its first time out.

All major components are made from foam styrene cut to shape with a hot wire and finished with glass paper. A suitable cutting bow for the styrene is shown in Figure I, this can be powered by a transformer or variac direct from the mains, or probably more easily by a 12 volt car battery. Resistance wire from a 'replacement fire element' is used — 28swg (.0148in.) in my case. An 18in. long bow takes approximately 2 amps at 8 volts. Different wire sizes will require different voltages; the thinner or longer the wire, the higher the voltage needed.

A variety of bow designs are possible but the most important point is to keep a good spring tension On the wire since it stretches on heating. A few practice cuts will soon show the best speed.

Balsa leading and trailing edges are used on the wings to preserve the outline, and balsa mainspars are used in the tailplane and as a stern post and rudder leading edge. Such thin foam sections are virtually impossible to cut by the normal method and after several unsuccessful attempts, the following methods were adopted. All templates are cut from 1/32 in card and held in place with ordinary straight pins.

Wings: Airfoil top sections are carefully positioned on an exact-length block and straight edges are pinned over these to provide a smooth 'run' on and off. The wire is brought down to the approximate centre of the wing and taken forward, moving slower at the tip than the root. This is repeated at the trailing edge, attempting to leave a small ridge down the centre of the wing which can be sanded off later. The straight edges are then removed and the wire cut in and up past the TE and LE. Finally, the rib templates are removed and replaced by straight edges to cut the undersurface.

Several attempts may be necessary to get a useable pair of wings, but with practice the system becomes reasonably simple and material costs are negligible. If the templates are positioned close to the top of the block the wire can be seen through the top whilst cutting and this helps considerably. Balsa leading and trailing edges are cut oversize and stuck on with PVA. The whole thing is then sanded with first a medium, then fine glass-paper on a block, taking care to preserve the section.

Tail surfaces: These are so thin and sharply tapered that it was obvious that the above method would not work; instead straight edges were pinned to an oversize block and tapered sheet cut. A template of the plan was then moved around, until it seemed to coincide with a position that would give a reasonable blank, and was then cut round with the wire and inspected, changing the position or cutting another tapered sheet until correct. This is easier to do than it sounds, and once found its opposite number is cut alongside. The sections are all glued on either side of a kin. spar and finally sanded to shape.

Fuselage: Using straight edges, two blocks are cut to size slightly larger than the fuselage, and side templates pinned on; the blocks must meet each other exactly since this will form the fuselage join. Cut out and then do the same with top and bottom templates centred, then over the join. The fuselage must now be spot glued together and sanded to shape using progressively finer glass paper. Check cowls are cut, sanded to fit and glued on (PVA)..." 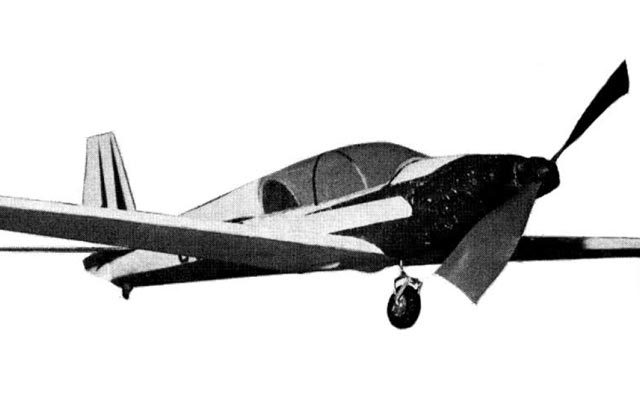