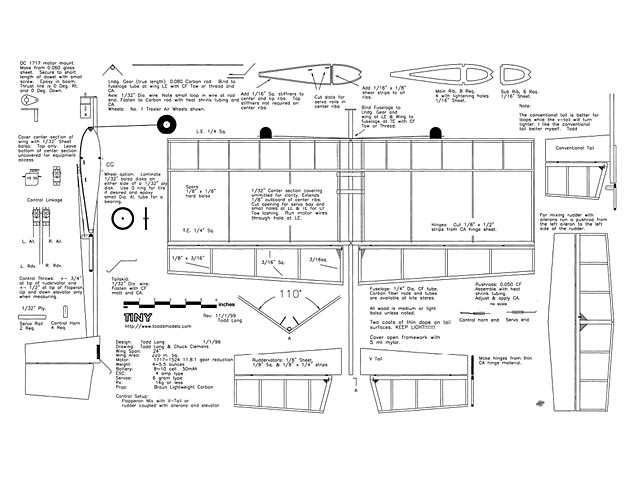 Quote: "Electric-powered radio-controlled models have come a long way in the last five years or so. I was fortunate to start in this branch of model aviation near its beginning. I have watched electric power grow and flourish. Recently, the trend toward smaller, lighter, or slower models has gained momentum.

Slow flyers seemed a good idea to me. I would be able to fly near my home, in a small park, or even indoors in a hall or gym. Clean, quiet electric power opened up all sorts of new flying fields. But I like my models to be aerobatic; just flying around in circles and doing figure-8s doesn't get me too excited. Some of the slow flyers such as the Mouse and the IFO can do aerobatics, but those models don't ordinarily allow flying outdoors in a park because they require relatively windless conditions (still air). What I needed was a fully aerobatic, lightweight, slow-flying model that would handle a breeze and do lots of fun maneuvers.

Well, Todd Long at Todd's Models came to my rescue: he designed a neat little slow flyer/fun-fly model called the Tiny. It looks as though someone has shrunk a competition fun-fly model - right down to the (relatively) big rectangular wing and carbon boom fuselage. It has a 24-inch span (61 centimeters) and 220 square inches of wing area (1,419 square centimeters). Todd also sells all of the neat little electronics and other bits that make the Tiny really dance.

CONSTRUCTION: If you have some modeling experience, building the Tiny will be a snap. The most difficult part of the construction is slicing out the wing ribs, and that's only if you choose to cut all the lightening holes in them. If you prefer, they can be left solid. Just be weight-conscious when choosing the wood.

With a small model like this, wood selection is the key to outstanding performance. You don't have to be an expert free-flight modeler to find good wood, but you do need to approach the balsa bin with a different goal from when you're constructing a Belchfire 40. All of the wood used for the Tiny should be lightweight balsa. Ask your balsa supplier if he has 'contest' balsa; if he does, choose most of your wood from the 6- to 8-pound-density range. Otherwise, look for wood that seems too light to do the job, and you'll have it about right. Stay away from wood that is light but mushy and has little strength. The exceptions are the wing leading edge and spars, which should be medium-weight balsa and fairly stiff. (You can short-circuit this search by buying a kit from Toddsmodels.com.)

Before framing up the wing, I chose to add the vertical stiffeners to the ribs and the lengthwise stiffeners to the tip ribs. Pin the lower spar down over the plan by crossing your pins over the spar. (Don't pierce the spar or you'll weaken it.) The trailing edge is held in position with 1/2-inch balsa spacers to set the proper height. Glue in the ribs, the leading edge, the top spar and then the half ribs. Add the servo-mounting rails and the top center-section sheeting, and the wing is all framed up. How's that for quick?

Now you have a couple of decisions to make. The Tiny plan shows a conventional tail and a V-tail. With the conventional tail, you can choose a movable rudder or a one-unit rudder and fin. For the V-tail, the plan shows a unique pushrod arrangement that couples them to the ailerons. This makes the model more responsive and results in nicely coordinated turns when flying slowly. To use this setup, you will need a radio that can do mixing for a tailless model in the transmitter.

I chose to build the conventional tail and to fix the rudder. This worked fine outdoors and at 'high' speeds, but when flying at slow speeds indoors, the adverse yaw made the model a handful. I subsequently cut the rudder free and hinged it. The rudder is driven off the left aileron horn, so an extra servo isn't needed. You barely notice the difference when doing rolls, but it makes the model much easier to fly slowly indoors.

All of the other surfaces are either framed with sticks or cut from sheet balsa. If your wood's weight varies, try to use the stiffer pieces for the outline of a surface and the softer pieces for the 'ribs.' Once everything has been framed up, sand all of the components smooth with 220- and then 400-grit sandpaper. Bevel the leading edges on the elevator, rudder and ailerons. Cut the hinge slots and fit the hinges, but don't glue them into place yet. I used Sig Easy Hinges cut down into 1/8 x 1/2-inch strips.

At this point, you can do some initial assembly or wait until you've covered the components. I decided to attach the wing, stabilizer and vertical fin to the fuselage boom before covering them. You can easily cut the carbon-tube boom to length using a cut-off wheel in your Dremel tool (or its equivalent; in a pinch, a hacksaw will work).

Sand the finish on the tube where you plan to glue components. Attach the wing first, making sure that it's centered (left to right) and square to the boom. Wrap the joints at the leading and trailing edges with some carbon tow and secure the tow with CA or epoxy. Place the wing/boom assembly upside-down on your workbench, and block the wing up level using 1/2-inch balsa blocks under the trailing edge. This makes it easy to attach the stabilizer and keep everything straight and square. Be sure to put the stabilizer on the bottom of the boom! I didn't, and although the model flies well, I had some headaches when I installed the fin and rudder. Be sure to align the fin properly.

If you choose the V-tail option, carefully fit and join the halves at the proper angle. Then it is a pretty simple matter to attach the V-tail assembly to the bottom of the boom.

COVERING: This may seem intimidating to someone who has never covered a lightweight model with lightweight Mylar. Don't worry, though; if you've used an iron-on film, you'll be able to do this, too. To cover my Tiny, I used the 0.5-mil Mylar that Todd's Models provided. For adhesive, I used Film Formula Balsarite. This version of Balsarite is already pretty thin; it can also be used as the finish on the solid wood components.

FINAL ASSEMBLY: Cut the control horns from 1/32-inch ply. Drill the holes by using a small piece of pushrod wire in a pin vise. Next, glue the horns into the surfaces. Pay close attention to the plans to ensure that the horns go on the proper side of their surface, or you'll have a hard time hooking up the pushrods later.

Now insert the hinges and glue them into place. Be sure to flex the surfaces to ensure they have enough available movement. To fly at slow speeds and in tight confines, you need 20 to 30 degrees of throw.

The carbon landing gear can be tack-glued together at the proper angle (refer to the plan) and then lashed into place with carbon tow and glued. The plans show Trexler no.1 wheels, which work really nicely. I couldn't find them locally, so I used Peck Polymers' plastic wheels instead.

The axles are bent pieces of fine wire. Be sure to include the closed loop at the top because it helps prevent the axle from spinning on the gear leg. Attach the axles to the landing-gear legs with small-diameter heat-shrink tubing. Shrink the tubing, and then twist the axles around to align everything as needed. Fix the axles permanently into place with a small drop of thin CA. Bend and install the tailskid.

Glue a short length of wooden dowel into the front of the fuselage boom and drill it for a no. 2 wood screw. Cut the motor mount out of a suitable material - ply, or undrilled, printed-circuit-board material - and fasten it to the front of the fuselage. You could also take the easy way out, as I did, and purchase a Todd's Models' mount, which fits everything perfectly..."

Quote: "Hi Steve, Attached is Todd Long's classic Tiny plan from RC MicroFlight of December 1999. This was kitted for a while and many were built. Regards, DeeBee1."

Photo of completed Tiny model was found on line at http://www.ef-uk.net/models/aircraft-electric/tiny.htm 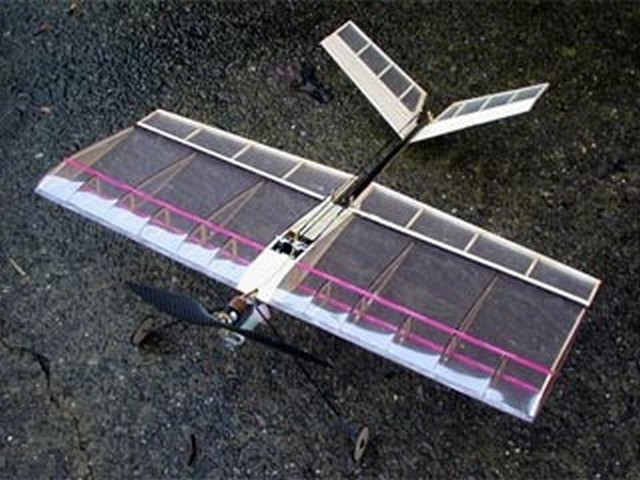