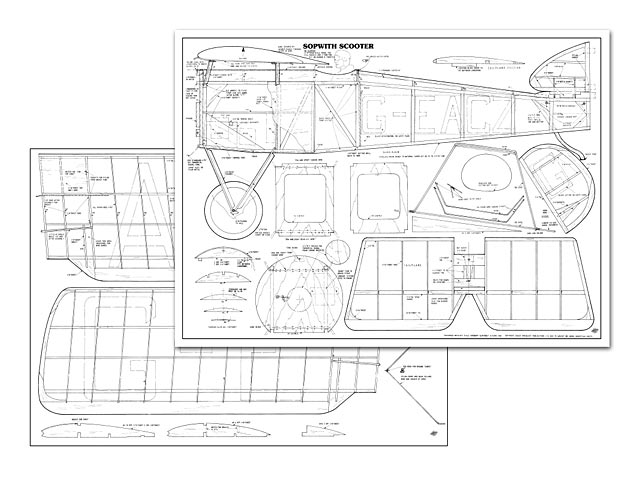 Sopwith Scooter (Sopwith Monoplane No1). Scale model for 20 sized engines and 2/3 function radio. The subject was an experimental prototype that featured a single slightly swept parasol wing, attached onto a standard Camel fuselage.

Simple open structure framework makes the Scooter an ideal subject for building a first scale model. Short nose means that you must build light at the rear of the fuselage and tail surfaces if you want to avoid additional weight in the cowling. Diesel engines are particularly suitable for this style of model, they are capable of swinging large propellors, mount the tank alongside the engine. Suitable commercial cowls include the Chart Micromold 6-3/4in ABS and Flair 6-3/4 in dia versions. These two companies also produce 4-3/8 in dia scale wheels.

The Scooter was Sopwith's first venture into the monoplane field. It appeared in June 1918 and was initially christened Sopwith Monoplane No.1. In order to cut design and production time a Camel fuselage was used, to which a swept-back parasol wing was mounted very close to the fuselage. This wing was braced by flying wires which ran from the bottom longerons to the mainplanes and landing wires anchored to a pyramidal cabane mounted above the centre section.

The Model: As a former free flight enthusiast who turned to radio in 1964 I find I am successful with scale models only if I keep to the old free flight axiom - build light, and keep it simple. To that end I rely on basic trimming skill and rudder and throttle control for flight, although an elevator servo could be fitted if desired. So this model is not for the super scale fans but rather for a first venture into scale. A PAW 19 provides sufficient power to give a realistic air speed.

Construction: I always do the easy parts first which if they turn out well encourage one to carry on! Tailplane and rubber A few bits of strip and sheet from the scrap box and you are home and dry. Nothing to it!

Wings: Apart from the dreaded rib cutting there's nothing difficult here. Bearing in mind the model is not intended to perform loops and Immelman's you can use medium grade wood throughout, except for the one spruce spar. Build in at least 1/4 in washout at each tip.

Fuselage: Again, use medium balsa throughout. Weight is the ever present enemy! I find it useful to extend the four longerons by half an inch as an aid to assembly of the two sides to the front bulkhead. The longeron extensions fit into the 1/4 in square holes in the front former and the surplus is trimmed off afterwards.

The tricky bit is sewing the undercarriage and centre section wires to the front bulkhead. After assembling the basic fuselage complete with formers you carefully remove 1/4 in from the front two uprights, insert the wires, sew them on and finally cut and fit the large fillets as shown on the drawing.

Covering: Use Solartex is the only advice I can give. Wonderful stuff!

Finishing: The Scooter first appeared in RAF colours and later as a civilian job. The photos show both schemes. The civilian version is more colourful although I cannot vouch for accuracy of the red fuselage. Old photos show it in at least two colours.

Flying: Make sure you get the CG right. My model balanced at a point directly under the apex of the pylon. Test glides a la free flight technique showed need of 1/16 in packing under rear of tailplane, and that was it. Don't try anything drastic with this model as although it flies well with minimum R/C control, if a wing drops it is difficult to pick it up again! Look upon it as providing a lot of fun for a small amount of money and fly it on calm summer evenings. Good luck with your 'guided free flight' Scooter, but if you do fit an additional servo remember not to over-stress the model.

Finally, for modellers who haven't had the fun of flying a two function model, ascent and descent is simply achieved by the use of the engine throttle - the only correct way!" 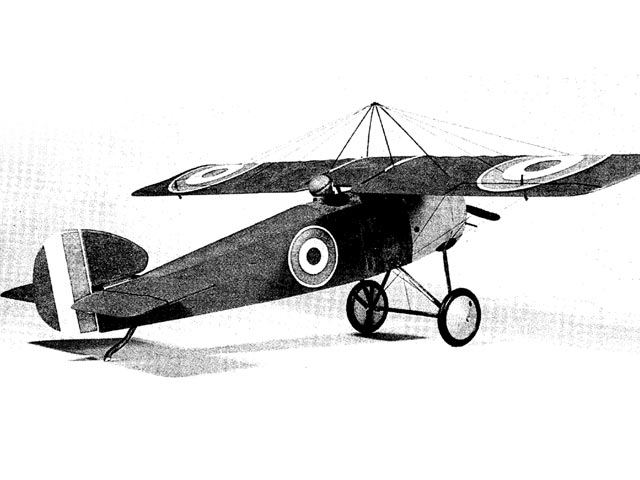