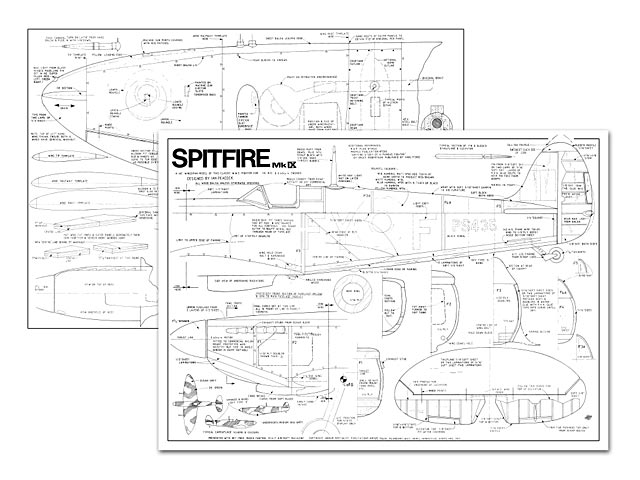 Quote: "THERE COMES A TIME in everyones life where they are able to buck the system! For me, Spitfires start at the Mk IX and go on from there! True - there are others that believe that Real Spitfires finished with the Mk V! Well 'chaque un a son goux' as the French say - and who would we be to argue?

From the modellers point of view, later Spitfires have a lot to offer. Longer noses, for instance, assist with the CG position and the last marks have wings that show less of a tendency to tip stalling. OK you say - but this is supposed to be a Battle of Britain aircraft! Well - all right, but if you can't pull rank occasionally, then life has dealt you a rough hand.

All other aspects aside, I like the Mk IX, and so that's what you've got. Serious B of B fans will have little difficulty shortening the nose, reverting to assymetric underwing coolers, and omitting the cannons. For us sport/scale flyers - just stick with the IX!

From the modelling point of view, those who have been around a bit will recognise that this 'new' Spitfire is a scaled up and slightly refined version of the Dogfight double first published as a free plan back in 1977. (Yes - some of us have been around for a while!). The Dogfight double established a number of firsts within the modelling business that still hold good today, and there is absolutely no reason to change a basically good idea. Structurally, the Spitfire, (and the Me109 coming in the issue after next), combine some traditional features, some modern features and just a few unusual features. Because of this, it is perhaps worth spending a few moments going through the procedures so as to avoid any undue missunderstandings - particularly amongst the newer faces.

Wings: The wings are veneered foam. A bold and simple statement concealing just a few different strokes, and worth a bit of explanation The cores are hot wire cut from 1.1 lb/cu ft density virgin bead foam. That is to say, almost the lightest grade of brand new material. Don't be tempted to use re-cycled foam, or the cheaper grades of builders foam. If in doubt, obtain quality foam, via your friendly neighbourhood model shop. He can order it for you from such reputable dealers as Model Flight Accessories in Kent. Alternatively, shop around the yellow pages for such specialist suppliers as Sheffield insulation, (branches countrywide despite the Yorkshire name). Eight foot by four foot sheets is the norm, but major stockists will often sell you broken sheets, and MFA will supply it in more useful and easily managed sizes.

First step is to cut out the main foam panels. These are best cut with a hot wire using straight edge templates, but they can be band sawn to shape. The use of cardboard profile templates will ensure that port and starboard panels are identical. Note here, that there are five foam panels The centre section, and an inner and outer panel for each main wing section. Three aerofoil templates are therefore needed, and the cutting sequence is as follows:

(1) Cut centre section core to aerofoil using two root templates, and ensuring a square cut and no twist.
(2) Mark the centre line around the other four panels. Pin the inner and outer left hand panels together, and mark on the new tip line - allowing for 5° of washout. Join the rear of this line to the centre line along the root at the trailing edge. Separate inner and outer panels and mark the 2-1/2° washout on the inner face of the outer panel, and the outer face of the inner panel.
(3) Hot wire cut both panels using the relevant templates, and taking care to maintain the washout on each panel.
(4) Lightly sand the cores., and epoxy inner and outer cores together, checking that the washout is even and using the off cuts of foam to align the two parts whilst the adhesive cures.
(5) When dry, veneer top and bottom of the joined pair in one piece right across the join. (all right smart ass - I know you have to have two pieces - one top and one bottom, but you knew what I meant!)
(6) Repeat for right hand wing.

From here on in the rest of the wing is typical of veneered foam units. Add the balsa leading edge and false trailing edge, tack glue real TE in place, and add the laminated tips. Sand to shape, again constantly checking that the pre-cut wash out extends to the wing tips and trailing edge. Separate the TE and cut and re-fit aileron, torque rods and replace TE. There are, as always, a few useful wrinkles, and it is just as easy to sheet the wings with 0.4mm ply or 1/16 in balsa as it is to use veneer. If you intend to paint the Spitfire, then either finishing resin, or the tissue and dope route will be much quicker with either balsa or ply, and will require less material. Obechi veneer needs more filling coats to produce a good finish, thereby adding a lot of weight. Less coats balances out the extra weight of ply and requires a lot less elbow grease. Laminated wing tips can benefit from 1/32 in hard balsa between the two layers of soft balsa. This enables a hard edge to the tip which, in use, will resist knocks and dings. Finally remember to sand in the washout on the ailerons and TE before separating from the wing.

There is no undercarriage on the Spitfire, but for appearances sake, a dummy can be fixed. Accordingly a dihedral brace is shown, and this can be the wheel anchor point. Remember to hot wire cut the slots for this in the inner panels, and the centre section before adding the veneer. If you intend to use the 'drop tank' technique for hand launching, (and for protecting the underwing radiators on landing!), then add hard wood reinforcing for the tank anchorage bolts through the wing. The tank itself is laminated from layers of sheet. I used two 3/8 in laminations in the centre, faced each side with hard 1/8 in balsa. These two faces have 1/8 in ply inserts to carry the wheel axle bolt. Finally 1/2 in laminations each side complete the tank. Much use is now made of the razor plane, producing, en route, enough gerbil bedding for a fortnight! 6mm nylon wing bolts are used to hold the tank in place, and the anchor nuts are recessed into the tank fairing! All that is needed now is the hole for the aileron servo, and the wing dowel and bolts, but these are best left until the basic fuselage is assembled.

Fuselage: This is really a box with block top and bottom, however, there are still a few useful wrinkles to bear in mind. In an attempt to reduce the slab-sided look, the fuselage sides are pre-curved. Using soft 3/16 in sheet, and 1/32 in ply doublers, soak them well in water, and PVA them together whilst still wet. Hold in place with lashings of masking tape, pulled tight on the inner side to produce a curve! Do not overtighten, nor try to wrap them round a 6in bit of pipe! Too much of a curve will make later assembly difficult!! Firewall and formers can be cut..." 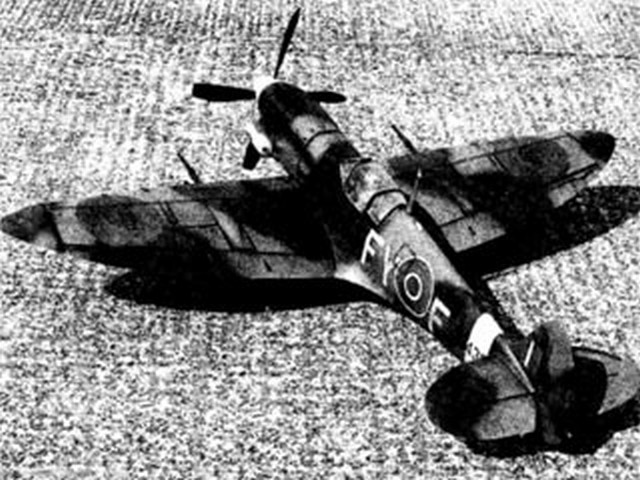