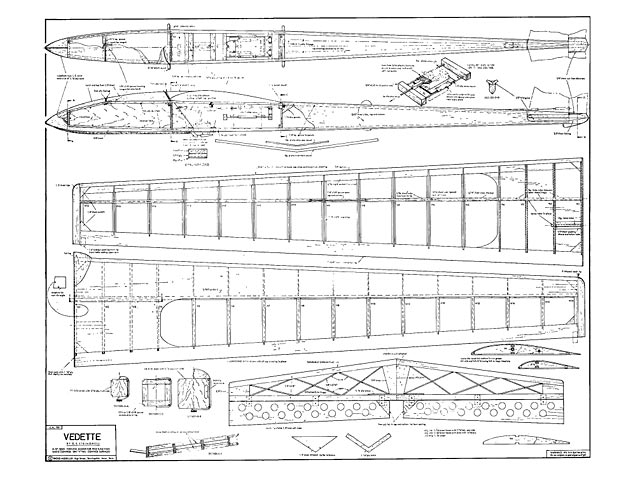 Quote: "Hi Steve and Mary, a jpeg of this design of mine from the mid 1970s popped up on an RCG thread a while ago in a discussion relating to 'V' tail models [see www.rcgroups.com/forums/showthread.php?t=2553230&page=2]. This was from the Radio Modeller in which it was published and Circlip had a go at it and managed to produce a buildable plan, albeit that much of the lettering is hard to decipher (I do have a full size plan somewhere and if (a) I ever find it and (b) I can find somewhere out here in rural France where I can get it scanned I will send a replacement). I meant to send this to you at the time but kept forgetting; however, when digging out some of the old photos which I have recently been sending I came across a couple of black and whites of the model being launched and then zipping along one of the Derbyshire ridges which used to be my slope soaring stamping ground - note the snow, I was hardier in those days and could stand the cold better! Anyway, here is the PDF Ian created, the photos (plus one from the RM article) and a bit of comment. It would make a nice electric model I guess.

"Vedette (Radio Modeller, August 1977) was a model I created specifically for light wind slope soaring, although it also had a tow hook and would fly nicely from the bungee or towline. However, light to moderate conditions on the slope were what it really excelled at, the handling was particularly sweet, in many ways it felt more like an aileron model than a ruddervator controlled one. For several years it was my favourite "go anywhere" slope model and was flown a great deal. Since this was before the days of computer transmitters, the rudder/elevator mix for the "V" tail was of the "sliding servo" type with the rudder servo being driven back and forth on wire rails by the elevator servo. The original met it's end when slope soaring the cliffs at Port Erin in the Isle of Man, launching from the hotel lawn. After about an hour the lift suddenly changed to "killer" and the whole bay just went up, and up, and up. The model rapidly got very small, but my eyesight was pretty good in those days (sigh) and I wasn't too worried until a Vickers Viscount out of Ronaldsway passed UNDER the model, at which point urgent action to get it down over-stressed the single 6 swg joiner and resulted in 90 degree a side dihedral. It descended very rapidly then and crashed into the surf on the beach; the airframe was a write off but by running down the cliff steps and back up, then four flights of stairs to my hotel room, I managed to save the radio gear by dunking it into a wash basin full of fresh water and then drying it out on a radiator! It was such a nice model to fly that, one of these days, I might build another but with an out runner up front to make it into a sort of mini hot (well, warm!) liner." 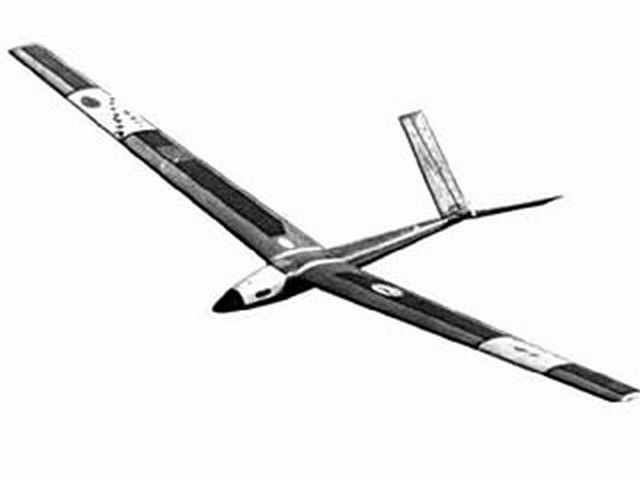