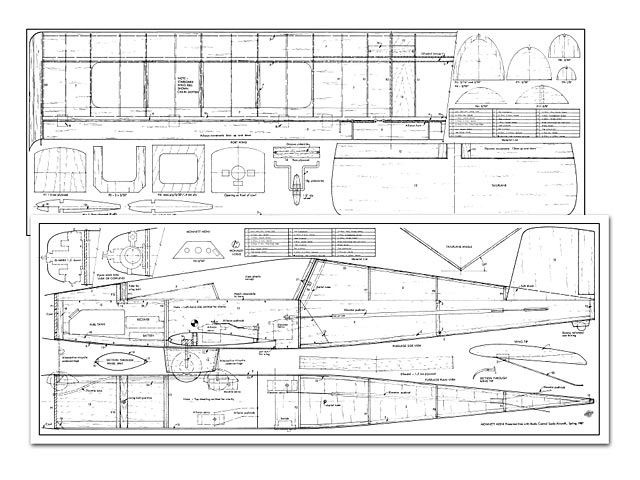 John Monnett designed the delightful little Moni as a single seat motor-glider for weekend fun flying. Constructed under the aegis of AEE (American Experiment Aircraft) the Moni is available in kit versions and includes the mono-wheel and tricycle types. Capable of mild aerobatics, the low drag design has very good flying characteristics and a lift/drag ratio of 1:20. A KFM aircooled two-stroke twin engine, of only 30 hp, powered the prototype, which first flew in 1981.

Bertil powered his model with a G-Mark .12 twin as this very closely resembles the full size motor. Alternatively, a single cylinder engine of around .10 cu in capacity can be used, mount it sidewinder and fit a dummy cylinder on the opposite side. Because of its modest proportion the Moni model can be easily transported with the wings and tailsurfaces permanently fixed - with access to the radio equipment etc, via a top hatch. If it is desired to have a removable wing the top hatch should be restricted to the fuel tank area.

More information about the full-size aeroplane has been included in the EAA magazine 'Sport Aviation' during the years 1981-84. Scale documentation may be available from INAV Ltd, Oshkosh, USA.

Before you Grab the Glue Bottle: Decide whether you are going to build the mono-wheel or tricycle undercarriage version. If the latter version is to be made you will have to modify the wing ribs to take the landing gear blocks and allow for fixing the nose wheel leg to former one. t out all the parts needed for construction, make F10 and F11 slightly oversize for eventual sanding to shape. Note that formers F2, 3 and 5 are laminated. Mark the centre line on F1 and allow for the type of engine mount, radio/or direct, to be used. Engine cowlings can be made from laminated balsawood or GRP moulding.

The canopy of the prototype Moni has a double curvature over the pilot position, this would call for a plug to be made and a moulding taken from it. If scale fidelity is not essential the canopy can be formed, between F11 and F5, as a simple curvature. Plan the R/C equipment layout and fuel tank installation.

Fuselage Construction: Glue the .4mm plywood doublers to the fuselage sides and mark the position of the formers, wing cut-out (remove) triangular stock and longerons etc, on the fuselage sides - left and right - glue the longerons and stock to the sides. Formers 1 to 3 are glued to one fuselage side, check for 90°, and then glue the other side in position, lay inverted over the building board (with F1 overhanging) to get the fuselage square. Mark centre lines on remaining formers and, after joining rear end of fuselage, add these formers and the 1/8 sq top longeron. Top decking 1/16 in sheeting should be dampened before fitting to assist bending. Add the bottom sheeting except for the wing area.

V tail: Cut out the tailplane to the plan form, remove the elevators and cut to the centreline with chamfers. Join the tailplane halves, the centre angle is 110°. Reinforcement of .4mm plywood is fitted at the control horn positions. When fitting the V tail to the fuselage ensure that the incidence angle remains at 0°, it may be necessary to pack up the fuselage sides.

When the wing halves are completed (root ribs are angled and lower sheeting omitted at this stage) join them, propping up the tips to give the correct dihedral. To fit the 1.5mm plywood dihedral brace cut slots to half depth in the wing ribs and then cut slots in the brace, also half depth, to coincide with the ribs. Add the torque rods, note the offset positioning, the trailing edge and trial fit the ailerons and hinges. Glue the undercarriage mounting block and .4mm plywood reinforcing in position followed by the underside sheeting. The Hoerner Style vortex wing tips are carved from balsawood.

Fit the wing to the fuselage at 0° incidence, the lower filling pieces, undercarriage legs (clamped or sewn and epoxied to the plywood) and underside sheeting can then be added.

Canopy/Hatch: The canopy/hatch is formed of 1/16 base sheeting, 1/16 sheeted instrument console, formers (F11 being drilled to take the forward fixing bolt) and the transparent canopy. Retention at the rear former is by a 3/16 dowel. The instrument panel shows, from the left, oil pressure/ fuel, airspeed, altimeter and radio.

Finishing: Installation of the radio equipment, with small servos, is straightforward but the use of ball-links is recommended for the elevator horns (dual pushrod linkages). Remember to lock the hinges with wooden toothpicks for security. Cover the model with a lightweight material ie Micafilm, Solarfilm or tissue and dope. The general colour scheme - a simple one - can be seen in the photographs.

Flying: Control surface movements used on the original model were:- Elevators - 1/2 in up and down, Ailerons - 1/4 in up an down. Bertil's model was quite light, only 835g (27 ozs) but it still flies well in moderate winds. Aerobatic performance is good, with excellent response, to the controls and without any vices. The Moni floats in nicely for landings and the one-wheel touch-downs do not present any difficulties.

Before you fly, check the CG. Flying from grass will entail a hand launch, take-offs from tarmac are made easy by the fitting of the pianowire wingtip guides. You will find the Moni a pleasant model, Bertil really enjoys his. Good Flying!" 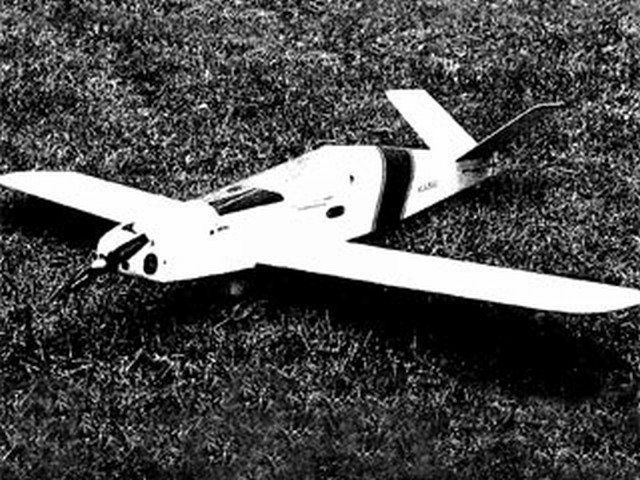