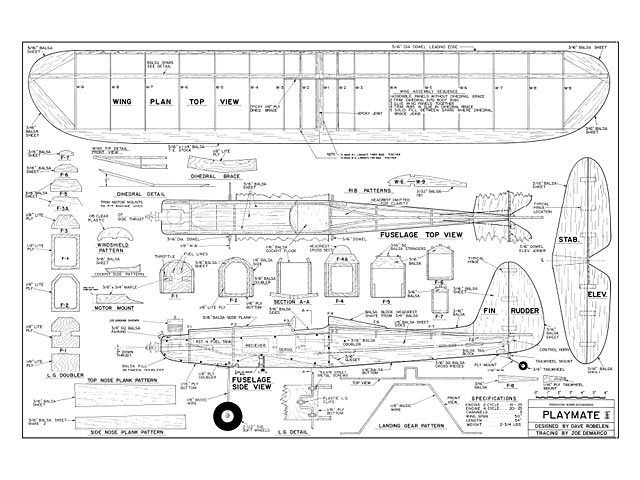 Quote: "With carefully planned moments, dihedral and control surface areas, this low-wing RC sport design proves that three-channel controls can have great maneouvrability and that ailerons aren't required for a low-winger. For .15 to .25 engines and having a 50inch wingspan, it is easy to transport.

HAVE YOU been searching for that 'just right' new model project? How about a spiffy-looking sport model with scale-like lines that is quick to build? Are you attracted to compact models that transport easily and use little fuel? How about true school-yard performance with minimum noise? Or complete aerobatics ability for the hotshot with gentle behavior for the novice? Of course any new design should also be compatible with the popular four-stroke engines.

Quite a shopping list, Wouldn't you say? Obviously, it seems like way too many features for any one design. That may have been true in the past, but now there is the Playmate. This model was designed and developed purely for recreation, using modern technology and blended with a nostalgic flavor - both in appearance and materials. It is suitable for both advanced and novice pilots depending mainly on choice of the engine.

I lean toward a realistic and nostalgic style of design using open cockpits and tail wheels to symbolize a major era in aviation. The Golden Era theme was chosen for the Playmate and just to frost the cake, I elected to use curved, rounded shapes. The low-wing layout was an easy choice, as it provides excellent ground handling and fiying qualities. The tail-dragger landing gear functions great even on rough, bumpy grass and dirt.

I realize I have made a lot of claims that may clash with your local expert's opinion (perhaps yours, too) but if I've caught your attention, let me talk about the Playmate in detail so you will see why I think it is so great.

In the matter of size, I wanted a model large enough to fly smoothly and handle well on bumpy ground, yet compact for transporting easily in modern cars. Also it should have excellent fuel economy and be roomy enough for standard RC equipment. The size chosen, 50 in wingspan, has worked out very well for these considerations and is compatible with the .15 to .25 sizes of two-cycle engines (or .20 to .25 four-strokes). This general engine group is also among, the quietest-running, especially well-suited for noise sensitive flying sites.

The choice to develop the Playmate as a three channel design came quite easily when I considered the situation. There is the matter of total weight: omitting one servo, linkage, control surffaces and structure for hinging the ailerons saved about a quarter of a pound. Not much? The entire model weighs only 2-1/2 pounds, so the percentage of savings is substantial. I believe that aerodynamic drag is also reduced by omitting the hinge lines from the wing. The savings in building time and effort are considerable, as well.

That's all well and good, you say, but doesn't a low-wing airplane need ailerons? I'm glad you asked that. Actually, what I am doing is setting up the Play-mate with a substantial yaw-roll coupling through the proper use of wing dihedral and vertical tail area. If you look closely, the movable rudder is much larger than usual for this sort of model, and I use generous travel. Proper tailoring of these factors provides a model that has is plenty decent in cross-winds and will roll beautifully with the rudder. A clean, axial four point roll is easily accomplished, for example, yet the model's overall handling is very docile. In fact the generous stability of the Playmate combined with its efficient aerodynamics make it fun for riding a thermal for long periods (five or ten minutes) at idle power.

The tail wheel landing gear has gained a bad reputation (ground looping, nose-overs, etc) which all too frequently has been deserved. Many of the early full-scale aircraft had rather bad manners on the ground, and as a result, models styled after them were usually confronted with the same difficulties. My approach on the Playmate was a little different from many: I treated the design as a miniature airplane controlled remotely over bumpy terrain - not a scale-like model. Admittedly, the concept that was involved may be a bit subtle, but it is the results that count. The solution involved using a wide tread on the main gear'together with a long moment arm for the tail wheel. Assuming good wheel alignment, a model with this layout will take off repeatedly withouty any use of rudder, while the landing rolls are a piece of cake. As presented, the landing gear is biased for grass fields primarily; if you operate exclusively from pavement; you may want to bend the main-wheels rearward about 1/2 in. Please first try the layout as shown, and only make changes if there are problems.

Throughout the Playmate development, weight control has been a prime concern. Aside from the geometric differences, the wing loading can be considered to control the degree of difficulty involved in flying any model, whether it be high-wing, biplane, low-wing etc. At 12 oz / sq ft, the wing loading for a powerd model is very low, therefore, it is quite easy to fly. Omitting the aileron system and nose gear assembly are major factors in weight control, as is the type of construction. Many sport RC models are built to survive a major crash with little damage; however, there are severe weight penalties in this approach. The Playmate can withstand all normal, vigorous flight loads and, for that matter, many minor accidents. However, if you crash, it will break! In the era of cyanoacrylate (CyA) glues, MonoKote, and such, I would rather enjoy the to extra performance of a lighter model (and if it breaks, fix it).

When choosing equipment, keep in mind that the performance and flying qualities are directly affected by weight. Initially the prototype model was flown with standard Kraft servos, a 450 mAh battery, and a .15 engine. Even this combination, which is the least peppy that's likely to be assembled, was completely acceptable in every respect. Later, after much flying, the servos were replaced with Micro units, the battery was changed to a 325 mAh SR pack, and an OS .25 std RC was mounted. This is an amazing package. While gentle as a lamb at reduced throttle, the Playmate becomes a real fireball at full power. All acrobatic maneuvers are available with this setup. In fact, continuous flight at full throttle can be pretty wild. In local informal racing, the Playmate will stay even with a .45 FSR-powered Sweet Stick (oz9068) at approximately 75 mph! Of course, you don't have to fly at full throttle. I was just making a point, not trying to scare you off.

Much of the success of the Playmate also lies in the wing. The elliptical tips help minimize drag, while the airfoil chosen exhibits a very wide speed range. Do not let the simplistic flat-bottom shape of the airfoil put you off; in fact, it was developed specifically for this size and type of model with open-frame construction. The high-lift qualities of this airfoil together with the low wing loading provides extremely low landing speeds with excellent stall behavior. Yet the inverted performance is excellent.

Construction: Along with the attractive appearance, easy-going ways, and sparkling performance, the Playmate is also very easy to build. Once you have chosen an engine and equipment, the next step is to make yourself a 'kit.' The task of building almost any model from scratch is made easier by rounding up all needed materials at the start, making the appropriate pat-terns, and cutting the parts to shape before starting assembly.

One major influence on the quality of your finished model is the quality of the building materials. Translated into Playmate terms, this means you should find and use only the best balsa wood. I have been well pleased with Sig products and do not hesitate to recommend them. My prototype model is built from medium (6-8 lb per cu ft) balsa, except for the wing spars, which are quite firm. Time spent selecting really good materials will be well spent, indeed. Also watch for warped or crooked sheets of woos, and avoid them..."

Photo of completed Playmate model was found online at http://www.rccanada.ca/rccforum/album.php?albumid=245&pictureid=1582 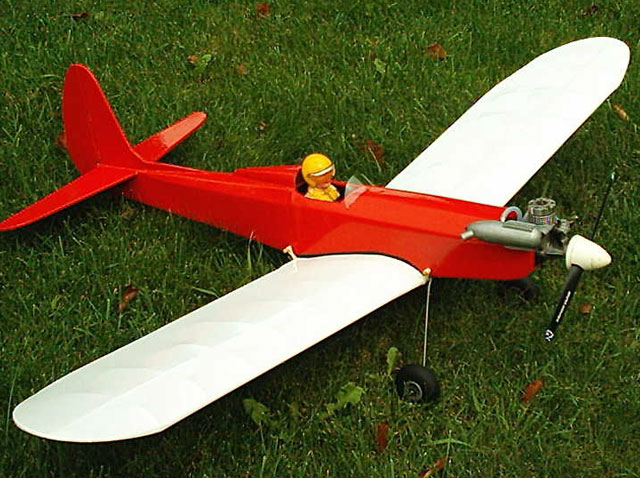