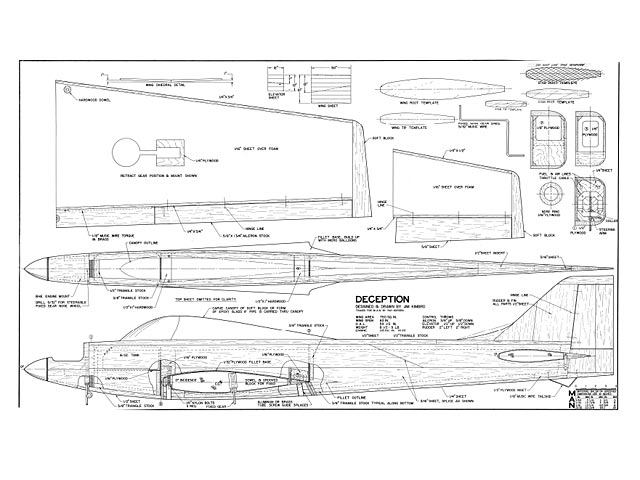 Quote: "Don't let its smooth, even lines, its quiet on-field demeanour deceive you or lull you into a false sense of security, as the Deception in the right hands is an all-out pattern competitor that can do it all for you at any contest. It's a real winner.

Having little experience in the area of designing, I had to rely on my experience in flying for use as a basis of my design. Since the wing is the heart of the aircraft, I started my design by choosing the right airfoil. After watching Rhett Miller's Compensator (oz10234) fly, I decided to use an airfoil similar to his. Of all the pattern planes I have seen fly, Rhea's seems to have that locked-in look, whether the wind is howling or dead calm. Having the locked-in feeling is very important because it is very difficult to concentrate on doing any maneuver if your main concern is just keeping the wing level.

Having chosen the airfoil, my next decision was what taper to use. I have had experience with equal taper, straight trail-ing edge, and swept wings. In my experience, I have found that the equal tapering of a wing produces an airplane that loops well and rolls fair; the straight trailing edge wing rolls well, but only loops fair. My experience with swept wings is limited, but I have found an airplane with a swept wing rolls well, but has a tendency in the loops to wander off heading. Since the equal taper, straight trailing edge, and swept wing all had their faults, I decided to go with a compromise. The equal-taper loops better, and the straight trailing-edge rolls better, so I decided to use a taper by which the trailing was swept forward 1 in at each tip. It must work because I ended up with a wing that loops and rolls very well.

Next, I had to choose a stab. There are three different kinds of stabs; the flat, dia-mond, and airfoil. Having had experience with all three, I decided to go with the airfoil because my experience showed it to be the best all-around stab.

Then, I designed the fuselage. It has been said that the fuselage is only there to hold the engine, wing, stab,, fin and radio gear. This, I feel, is a gross generalization, as the fuselage plays a very important part in the way the aircraft flies. I started by drawing the thrust line on a piece of paper; then I drew the wing root airfoil, with the centerline of the airfoil 1-1/4 in below the thrust line. I decided on the length of the tail moment: The tail moment on the Deception is very long, as to make an aircraft that has very smooth elevator response. I drew the stab root airfoil, with the center-line of the airfoil 14" above the thrust line. The reason for the centerline of the stab and wing's being the same distance from the thrust is that, since the aircraft
rolls around the thrust line..." 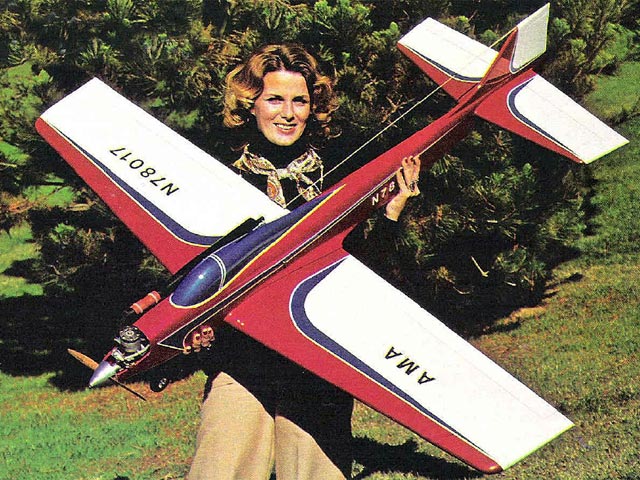