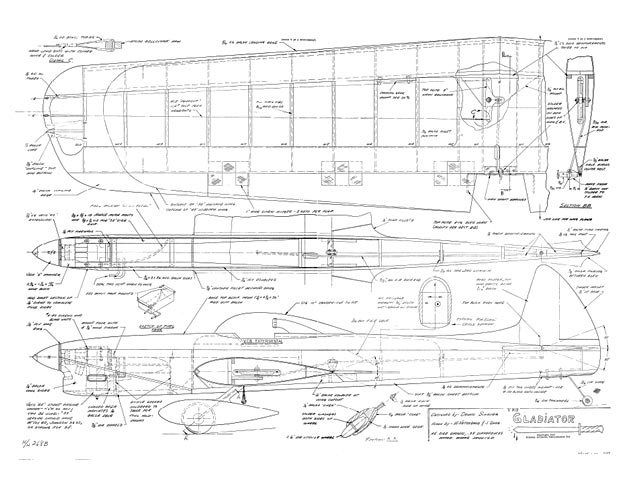 Quote: "A perfected design for the expert contest flyer. Plans show two sizes of this attractive and responsive model. The Gladiator, by Dennis Schauer.

AFTER designing and building four or five considerably different designs, I finally decided to analyze what I really wanted in a competition stunt model. After looking over many good stunt de-signs published in the magazines and watching many more fly in the Nationals and other local contests, there was one airplane that caught my eye. This was the Lark (oz828) by Charles Mackey.

The original Gladiator was similar in construction to Mackey's Lark. This is where the similarity ends. I decided that the airplane would have to be of a type that would be light enough to fly in all weather conditions, and have an eye-catching look. The first Gladiator was built early in the spring of 1960 and was flown in several Southern California contests. It either won or placed highly in all contests entered. The author qualified with it for the West Coast FAI Stunt Semi-finals in San Francisco, did poorly because of short engine runs.

The next contest was the 1960 Nationals in Dallas where the Gladiator placed sixth in total points and second in flight points. By this time, the model had seen considerable service and looked it. If it had had first place appearance points, it could have won. Since then, there have been seven more Gladiators built: two by my brother, Don; and one by Bob Harness Jr - which was flown to third place at the 1966 Nationals in the Senior Stunt event.

I built the 45 version in the spring of 1963 for the Los Alamitos National, at which time, I had had some eye trouble. During that period I flew the model at several Southern California contests when I was totally blind. This proved to me that the model was very stable and turned well. It certainly was consistent.

Various well-known stunt pilots have flown the original. All are of the opinion that this is a good airplane. It has good penetration which makes it an ideal windy weather airplane. The original has had approximately 50 gallons of fuel run through it and it is still in good struc-tural condition.

Due to its size and cost of construction, this is not a beginner's airplane. It is meant for the experienced modeler; therefore, I will not go too deeply into construction details. Most stunt modelers have their own methods of construction.

Wing construction is of the D-tube vertical spar type. There are two different wing spar templates shown on the plans, the shorter spars being for the 35 version. The spars are left full depth while the wing is being built, so that the wing may be built flat without any blocking of spars during construction. The spar splits along its centerline; wing is built in top and bottom halves. It is joined at the wing centerline with two3/8 in sq spruce spars. The offset in the wing is accomplished by 1/8 in wider rib spacing in the inboard wing. The ribs are cut by stacking 3/32 in balsa blanks between root and tip rib templates, then carving the shape.

Fuselage is of simple slab-side and rounded block construction with plywood doublers at the nose. Be sure when drill-ing engine mount holes to get two to three degrees engine offset. This is important for maintaining line tension..." 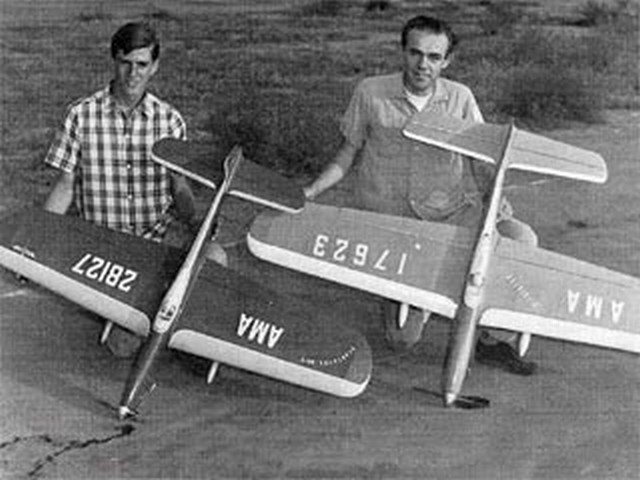