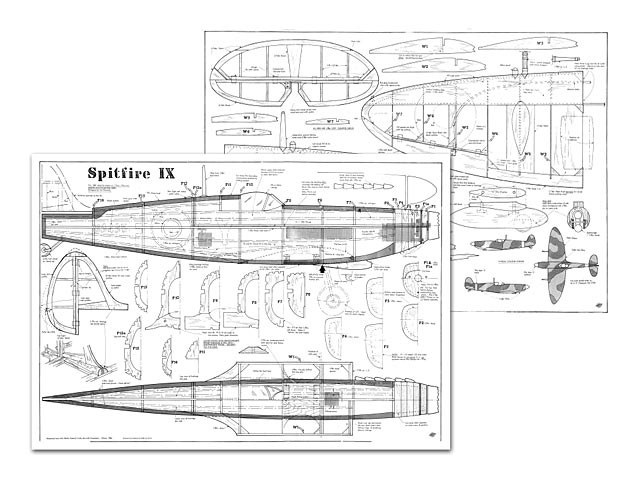 THERE CAN BE LITTLE DOUBT in anyones mind that the Spitfire is one of the most evocative aircraft ever to grace our skies! Neither before, nor since, has any fighter captured the imagination of the world, yet some 50 years on still survives to thrill thousands where ever they appear.

To the modeller, the Spitfire is the stuff from which dreams are made. Virtually all flyers, whether R/C, F/F or C/L appreciate the grace and line of the 'Spit' and even those stalwarts of the static model will feature an Airfix, Matchbox or Frog Spitfire, somewhere in their collection.

From my own personal point of view, I got this 'Spitfire syndrome' out of my system nearly 10 years ago - with the publication of the 'Dogfight double' in RCM&E (Plan No. RC/1325 & RC/1326). this was a bold step to produce a '20' sized model that could be built and flown by almost anyone with a bit of aileron experience. Many were built with great success and we received gratifying letters from all round the world. Some were even flown from the slope "sans moteur" and may even have been amongst the very first PSS models!

More recently the Spitfire came back into my life with the advent of a new Sport & Scale model of approx 1/5th scale from the DB Models stable. My involvement with this monster was only skin deep and involved the painting and decorating thereof. Much of this decoration was recorded on film and interested parties would do well to keep a weather eye open for a forthcoming feature showing, step by step, just how it was all done.

However, I digress, for the birth of the Spitfire stemmed from the idea of showing that electric power was a suitable source for 'scale'. I'd already made a couple of successful scale electric models (of the more slow and stable variety) together with a couple of 'hot ships' of the pylon racer derivative. Bringing the two together seemed to be a natural progression and the Spitfire came inevitably back to mind. After all, if the Spitfire could be made to fly electric, then surely anything could!

The real thing: There are many who have very fixed ideas about the Spitfire. Some would argue that the only true 'Spits' were the Mks I toV (in brown and green!) and that all later marks had lost the true character of the design. Others would disagree, the later Griffon engined variants offering a much more interesting subject. From the model flyers point of view, the later marks make for somewhat easier flying, but the 'character' is undeniably different.

I believe that the Mk IX offers the best compromise having a longer nose, that helps with getting the CG in the right place, yet retaining the basic charm of those earlier marks.

Historically, the Mk IX was also a compromise, which went on to set the seal on Spitfire development. It was in September 1941 that the RAF pilots reported the presence of a new, radial-engined fighter in the air over Northern France. The superior ceiling and speed of this new fighter, known to the Luftwaffe as the Focke-Wulf 190A-1 produced a somewhat urgent requirement for a better British fighter with which to combat the growing menace. Consequently an updated Spitfire was proposed and the Mk VIII was born. Even in wartime, it is an unescapeable fact that such a complete redesign takes a finite time to achieve. This factor had been foreseen by the Air Staff planners and the decisions taken with some alacrity to ask Rolls Royce, the manufacturers of the Spitfire's engine, to convert a couple of existing airframes to take the uprated engines (Merlin 60 & 61) destined for the Mk VIII. Mk I and Mk III airframes were suitably converted, both using 4 bladed propellers and tested at Boscombe Downs during the Summer/Autumn of 1941. Encouraged by the success of these aircraft, further airframes (Mk V's) were strengthened and fitted with Merlin 61's and these served as the definitive prototypes. Known now as the Mk IX, they had an additional radiator beneath the port wing to house the existing oil cooler and the intercooler from the lazer engine. This gave the Mk IX a symmetrical appearance when viewed from the front. (This feature had been used previously on other interim models.)

So successful was this conversion a grand total of 284 had been converted at Hucknall by the time retro fitment work finished in 1944. In addition to these conversions, existing contracts for the manufacture of Mk V's were modified to complete them as Mk IX's at both the Southampton and Castle Bromwich factories as more and more Merlin 61's became available. In point of fact more Mk IX's were made than any other version! Not bad for a bodge job!!

The Model: To the modern modeller, more at home with GRP and foam models, the electric Mk IX might well appear a little strange. However, these 'long-in-the-tooth' modellers like myself will not be overly surprised at the structure. In fact, the more astute amongst you might even recognise the parentage, for I am indebted to that maestro of the scale rubber job, Doug McHard for permission to use his magnificent 1/24th scale Spitfire (oz2460) model as the basis for this design. Whilst making the thank you's, I must also credit 'Variscale' of Bristol, whose plan enlarging service was used to scale up Doug's original drawings. I must say that this route to plan drawing is a great deal less time consuming than scaling up by hand.

Of course, the light but strong structure of such a model is fine in the smaller scales, although some sacrifices need to be made as the size gets larger. Furthermore, the fitting of Radio Control equipment places further requirements upon the structure. Additional areas of sheet creep in here and there, and the eagle eyed reader will notice areas on the plan that differ from those shown in the photographs. Of course we all benefit from hindsight, and there were many areas in the 'Electric-Spit' that I would not follow again when building a copy. Consequently the plan benefits from this hindsight. Also let me say that this model, despite several false starts (due to illness among other things) does fly and fly well. It is not in any way a difficult model to handle and anyone with a modicum of aileron/elevator experience will be able to fly it. It has no hidden vices but one does need to watch the weight of the airframe.

Power is derived from that excellent elecric combination the Kyosho 360 PT, matching gearbox and propeller and the battery sauce is the now universally accepted 6-cell buggy pack. I'll come quite clean, here, and state that I haven't flown- it with any other combination, however one supposes that any good quality buggy motor, suitably geared, and driving a well matched propeller should work as well. Of course, for the well heeled amongst you, the more exotic American or German Cobalt motors with their matching gearboxes or belt reducers would give an even better performance.

The problem of hand launching (and the subsequent landing!) is neatly overcome by reverting to the technique used on the Dog Fight Double Spitfire. As was seen earlier a wide variety of drop tanks were used on Spitfires and the use of one here, offers the modeller an excellent "hand hold" for launching and a suitable "wheeled skid" to protect the underside detail..."

Article pages, text and pics, thanks to Circlip. 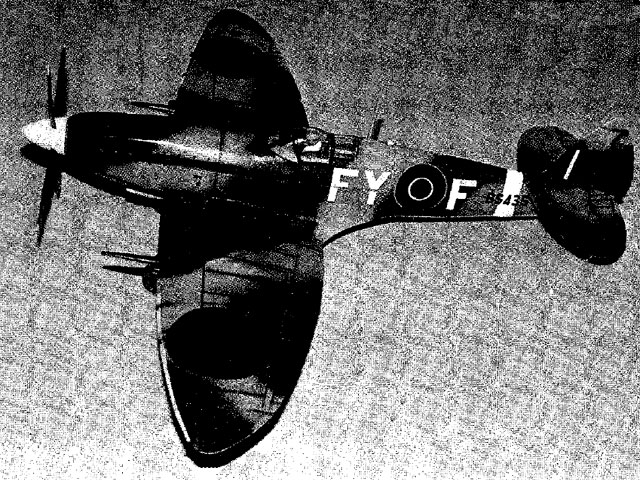 I built one of these from the magazine plan at the time of issue. Covered in doped tissue and sprayed with humbrol enamel, it weighed in ready to go at just under a pound and a half with a throttled PAW 2.49 - and that included fuel. I know that putting a diesel in it seemed a bit against the spirit of the design, but God it flew well. At the time, there were one or two similar sized veneered foam / fibreglass plan packs" offered in the magazine ads and I remember one of these was advertised as weighing in at "only 4 1/4 pounds" ! At the time I didn't fancy electric (although by all accounts, this model flew well as Ian designed it. The PAW meant I didn't need a heavy battery (as they were then), it had a small, neat silencer (which didn't poke out of the cowling like a large aluminium turd, and it was very quiet whilst swinging a realistic large propeller. It flew so well that on the glide I could pull the elevator fully back and it would completely refuse to stall, (tip stall or otherwise) - just float slowly down to a spot landing. (I wonder if the "4 1/4 pound" quick build model flew as sweetly) The structure with the tissue was strong and rigid and, surprisingly, the airframe would easily survive a badly fumbled barrel roll when I managed to shove it around an outside loop ! A few decades on, it's still in the loft and resurrectable - I really should dust it off and re-cover it. A lovely model and not as involved to build as it may look on first look. Outerzone is tremendous and a grateful thank you for all your efforts - you should be very proud of what you've managed to do and the pleasure you've brought - cheers and Happy Birthday !!
MartinAppleby - 01/04/2016
Hi Steve and Mary, Please find attached some pictures of my recently completed Spitfire, including a couple of progress shots [more pics 003-005]. I have a post on rcgroups if people were looking for more information about the build: www.rcgroups.com/forums Thanks for your amazing website!
Rocket_rodeo - 22/11/2016
Add a comment