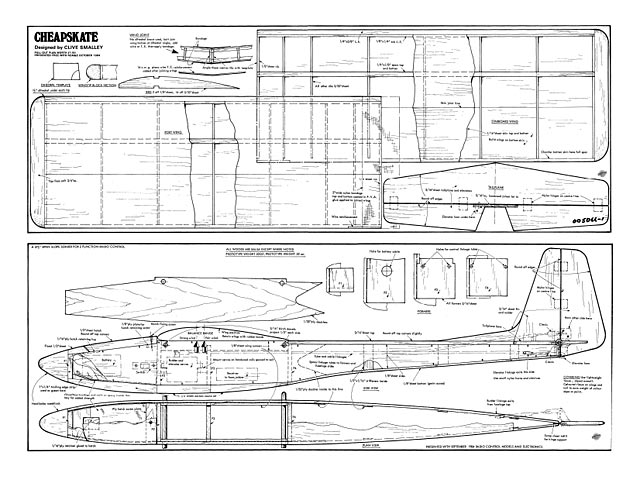 THE BRITISH WEATHER provides more headaches to the slope enthusiast than to almost any other form of radio control flying. Where I live the conditions at any time can be so different to those at the top of my nearest decent slope, that it is essential to take several different model types for a flying session to ensure some good flying. However, there is a limit to what can be carried, especially if this entails a quarter mile walk from the car park to the slope face. I therefore decided to build a small, general purpose simple to build and cheap model, capable of flying in most conditions except for very light winds. It can easily be carried and even left ready rigged in the car!

Having in the past designed and built many slopers of varying types I found the Radio Modeller Plan Soarcerer (oz8762) to be a great fun machine, but unnecessarily complicated to build. I decided to follow this very general layout but to minimise size and as simple to build as possible. Cheapskate is not in any way intended to be a copy of the Soarcerer or have the same appearance but the general layout is ideal for a small model.

I considered using foam/veneer wings as these are strong and practical, but I do not possess the cutting equipment and damage would need repairing in the workshop. In any case I much prefer the traditional balsa both for lightness and for working with. I also considered an open structure nylon covered wing, but this increases building time. I admit it may be stronger but it would probably be fairly heavy and again a workshop repair job. The all-sheet method adopted as decided upon for its quick building properties com-bined with the ease of repair at the flying site requiring only balsa cement and a few bits of scrap wood carried in the field box. Also it is easy to build the wing 'true' by pinning down to a flat building board when applying the upper wing skin. Of course if you build it warped it stays warped forever! One draw-back to the construction is that the sheet does tend to split but the balsa cement quickly cures this, and you can be flying again in seconds. The tail surfaces also lend them-selves to quick repairs, even large pieces can be spliced in at the site with little loss of strength.

A logical choice of wingspan was to use the full standard 36 in sheet with simple tips added. A fairly low aspect ratio was chosen to give sufficient wing area to keep the wing loading within reason. Having now flown the model I feel an even smaller one is perfectly possible though it hardly seems worthwhile just for the sake of going smaller. The prototype airframe ready to fly was surprisingly light at just under 23 oz with a 500 Ni-Cad, vintage 1970 receiver and mini servos. The wing loading works out at around 12 oz/sq ft which is about the same as a heavily built Soarcerer I built some years ago.

The construction is about as simple as possible given a desire to have a pleasing appearance. The only curves are those carved and sanded into the fuselage and these aren't critical. The wing ribs are the only parts having a curved edge to cut out. All remaining cuts can be done using a steel straight edge as a guide.

Construction: The constructional sequence is of little importance. Building the tail surfaces first gives a feeling of having the model one third built before you've hardly started!

The wing assembly begins by glueing up a 3 in and 4 in stock 1/16 sheet edge-to-edge for the lower skin. The rib and spar positions are then drawn into this sheet. Glue on the lower spar and ribs followed by the upper spar and sub leading edge. Make up the top skin leaving override chordwise to allow for the rib curvature. Using white glue or contact adhesive fit the upper skin in position and immediately pin the whole panel to the build-ing board. Leave for at least 24 hours. No washout is necessary due to the parallel chord and constant thickness. Clean up the edges and join both wing panels at the correct dihedral angle using five minute epoxy. Add the leading edge tip blocks and the spruce trailing edge reinforcing strip at the centre. Carve and sand whole wing to a smooth finish. Apply a 2 in wide nylon bandage around the centre joint using white glue to reinforce the joint. The basic wing is now complete ready for carving.

The fuselage is commenced by gluing the doublers to the sides with contact adhesive. Do remember left and right side! Glue F2 at right angles to one side and F4 at right angles to the other side. When dry join the side/ formers to each other checking that the upper side lines are parallel. Next join together the tail, followed by the nose wing F1. Add the wing saddles bottom panels and fit the tailplane. Epoxy in the rudder and elevator outer cables. These were crossed on the prototype to give straighter runs ie the left hand servo had its rear outlet on the fuselage right and vice versa. The cables should be epoxied to the fuselage sides just beneath the wing saddles in the R/C compartment. This will give maximum clearance for the Rx behind the servos. Now add the rear upper decking, pose block and spot cement the hatch in position. Carve and sand the fuselage to shape. Cut away the hatch and slice off the front inch or so. This is glued back into the fuselage. Drill the wing dowel holes and cut out any holes to suit the switch. Fit the retaining plate for the hatch. Finally glue on the fin and rudder.

Finishing and installation: The final finishing can be plastic film or dope and tissue. One advantage of plastic film is that it is waterproof but you may not be able to detect any small splits in the wing sheeting. I chose to use tissue and dope and be blowed to the weather!

The R/C installation is dead easy. The Rx at the back is a bit unusual but has advantages. Two servos are heavier than one Rx and get the weight forward. Former F3 can be fitted behind the servos to prevent any Rx rubber packing fouling the servos but in fact this was omitted on the prototype with no problems.

For the first flights chose a day with a nice steady breeze onto the slope. Check the balance point is towards the front position shown on the plan. This will probably give a nose heavy first slight (as with the prototype) but it is safer to progressively reduce the nose weight until satisfactory balance is achieved. If you start with the balance point too far aft you will end up with an uncontrollable model. Launch with the wing level and slightly nose down, with a nice smooth follow through! When trimmed out the model is great fun to fly, having good penetration. The control surfaces are quite powerful, especially the rudder so go easy on the stick stirring. Gentle nudges to start with. Quite violent manoeuvres are possible but keep up the speed for tight turns.

Finally why not get your friends to build one and have some impromptu pylon racing. Alternatively try some synchronised loops or follow the leader flying. The name of the game is fun and with the minimal costs in time and cash to build Cheapskate, you can take chances!" 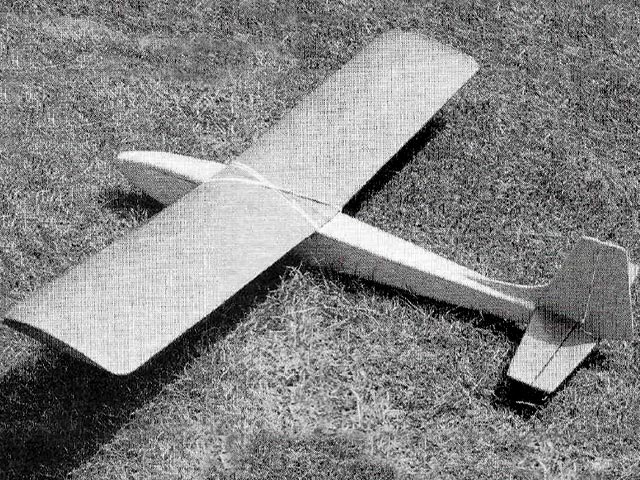