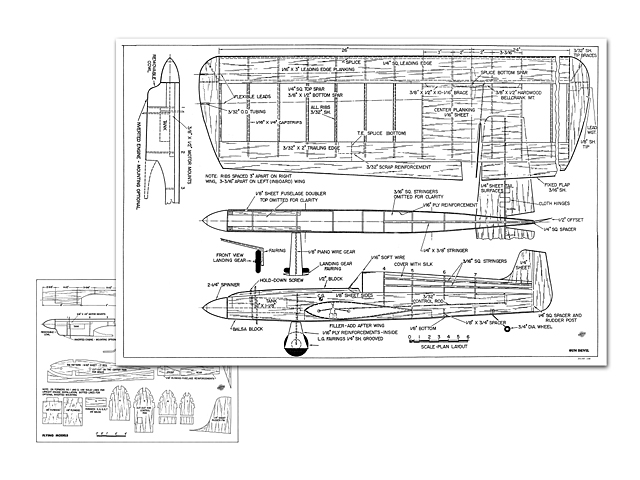 Quote: "The Sun Devil is a proven contest stunt design, requiring a minimum of construction effort. Being by nature somewhat lazy at the workbench, we can guarantee that there is little that will give anyone any difficulty.

Its ability to bring home the trophies has been proven in numerous Arizona contests, and the ease with which maneuvers are accomplished has encouraged the construction of Sun Devils by numerous stunt flying beginners in this area.

The original Sun Devil was finished in late 1957, with the idea of having a quickly built practice plane. However the first flights were more than hoped for, and it was decided that with a little cleaning up here and there, she'd make a good contest plane that could hold its own with any of them, but still be simple and easy to build.

The model as presented here is the end result of eighteen months of testing, with over 300 flights, plus a close observance of characteristics of some eight or ten others which are being flown in Tucson.

You may be wondering what, if anything, is so different about this model from the usual stunt plane. In flying ability, there is no great difference between it and other popular designs. Current stunt designs range from those which will turn very tightly to those which are more stable and slower to react. Either extreme is capable of winning contests but a model that falls between the extremes will prove more satisfactory for the majority of us. A sensitive, sharp turning model is excellent on the maneuvers requiring precise corners, but it falls short on the rest of the pattern. Unless one has the time and money to practice continuously, the round maneuvers will be jagged and irregular, due to overcontrolling.

On the other hand, a 'groovy' model works well until the square corners come up, then the trouble is simply that the model won't turn them tight enough to meet the requirements of the AMA pattern. The 'Sun Devil' was aimed at the center of these extremes, but may be modified to individual tastes by moving the center of gravity.

The usual stunt design requires somewhat more building effort than does this design. Construction is conventional and simplified where possible. Wing ribs are all the same size, and fewer ribs are used than in many ships. Tail surfaces are solid. No flaps are used (or needed!) and the fuselage top, from the cockpit back is silked, instead of using balsa sheet. These features can add up to a substantial savings in time.

The model was designed with a complete disregard for mathematical formulas. Rule of thumb accompanied by thorough experimentation and modification, seem to bring out the best results. Flaps were left off for simplicity, so the conclusion was that a large wing was needed for good corners, without a tendency to mush.

Horizontal tail surfaces were decided on by what 'looked right' in proportion to the wing. They were modified on subsequent ships, and later changed back to original measurements. A short tail moment arm was used for maneuverability and a fairly long nose moment for stability.

No material flight differences noted between upright and inverted engine mountings, so you may suit your individual tastes.

Landing gear design and position was modified somewhat for better ground handling. Two types of gear are shown. With either type mounted in the correct position, takeoffs and landings are good.

The center of gravity as shown is suitable for most flyers. Considerable experimentation was done with the CG and it can make quite a bit of difference in the performance. Good line tension is maintained with the combination of engine offset, shortened outboard wing, wing weight, and rudder offset. Don't overdo on any of these however.

Local 'Sun Devils' have varied from 32 to 43 ounces, the best weight seems to be under 40 ounces. Structural weaknesses in earlier models have been corrected, and if built correctly, the model should last for several hundred flights or more, which takes longer to accumulate than most of us realize!

Construction will be covered rather lightly, as it is for the most part fairly conventional. Choice of wood is important, so follow the bill of materials closely. A good deal of thought went into deciding the sizes and grades of wood to be used. Use a cement which doesn't dry too quickly. Elmer's or Wilhold is recomended for fuselage doublers, motor mounts..." 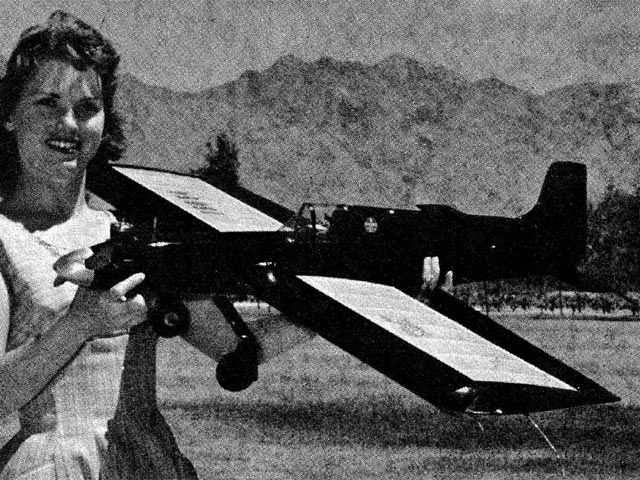