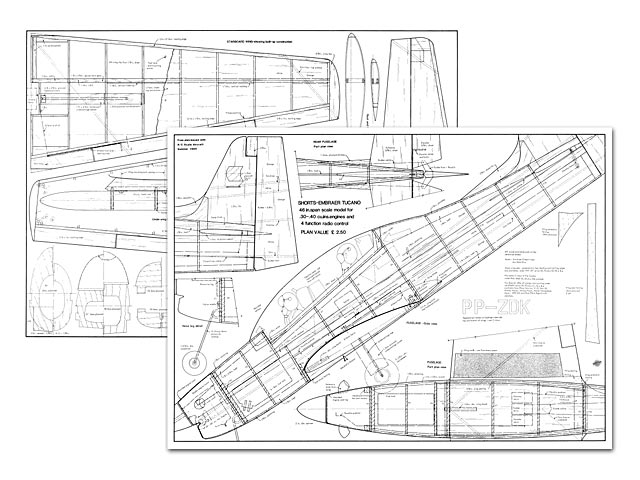 BY THE TIME THIS MAGAZINE is published the decision will have been made regarding the replacement trainer aircraft to be used by the Royal Air Force. Whether or not the Tucano turns out to be the scheduled aircraft there is no doubt that this aircraft is extremely attractive and is well worth modelling. If the final choice does fall upon one of the other three contenders well, there is always another issue of R/C Scale Aircraft. However, from a purely modelling stand point, the Tucano is probably the nicest design of the four contenders.

Decision time: Before rushing on with the construction of the model there are one or two decisions to be taken. The most important consideration is the fitting, or omission, of the undercarriage. Ideally, the Tucano would be fitted with retracting undercarriage so that the wheels tuck-away after lift-off. Bear in mind, though, that this is a smallish model and the installation of retract gear would be difficult and, more importantly, will increase the wing loading substantially. There are commercial retracts on the market that would fit this model (you would have to rearrange the fuel tank position for the nose wheel) but you must watch the overall weight of the model if you decide to install them. The prototype was built without an undercarriage, for hand launching and 'belly' landings. A Tucano carry-ing out aerobatics with the wheels hanging down is a definite no-no as far as we are concerned.

The engine is shown on the drawings in the inverted position for obvious reasons, a cylinder head sticking out the top of the engine cowling would look very ugly: Many modellers get worried about an inverted engine position, particularly with the dire warnings of damaging four-stroke motors by flooding them in the inverted state. Simply remember that the model can be inverted during starting and this will give you no more problems than experienced with the engine upright. If you decide to use a four-stroke engine (35 to 40) check the position of the engine mount bulkhead (F2) to see whether it needs to be moved back - the four-strokes tend to have a greater 'over-hang' than similar capacity two-stroke motors.

Commercial spinners are available in sizes to suit the Tucano but not all of them are to the same design. The Goldberg spinner used on the prototype model has a recessed back plate and, therefore, the engine projects further from the front of the cowling than would be the case with a flat spinner backplate. Check with the drawing.

Rectangular section fuel tanks are easier to install in this type of model, the round types are difficult to fit to ensure that they do not rotate. A six ounce size would be quite adequate for a four-stroke engine, an eight ounce tank would give more than ample flying time with a thirsty '35' engine.

Radio control installations are quite conventional and although there is ample room in the fuselage for the equipment there will not be the opportunity to move the battery around to adjust the C of G of the model on completion. Where a reasonably light engine is installed do try to keep the weight of the rear of the model down, select the wood for the tail surfaces with care and keep the paintwork to a minimum.

Hack and hew: Not all of us are enamoured with 'modern' technology in modelling and prefer the traditional methods. However, the Tucano wings do cry out for veneered foam construction as the wing planform is relatively highly tapered and the aerofoil section at the tip is both thin and includes washout. Conventional con-struction is shown on the plans but this is a case where the alternative technology provides the best answer.

Pairs of foam wings, veneered but without the leading and trailing edges fitted, are available for £8.95 plus £2.40 postage (order FWT RM 291) or from your local retailer or MAP Plans stockist. 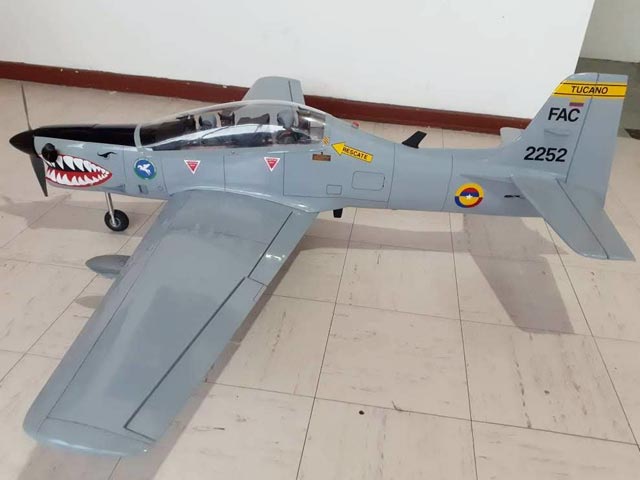