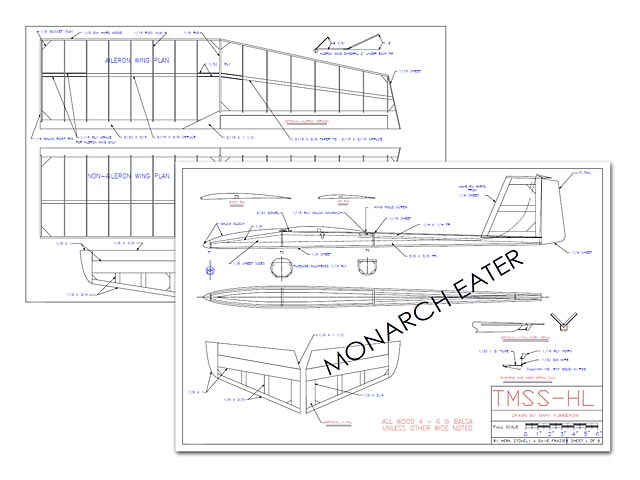 Quote: "Hi Steve, Herk Stokely recently sent me some designs and drawings by him, David Frazier, and Mark Kummerow, along with permission to spread them around. These are from the 90s..."

I'm just the guy who translated files, but I do have some comments.

These files were originally sent to me by Herk Stokely. The original files were all dated about 1995, so the design must be at least that old. I also have a set of paper plans from around then. Some of the drawings and files are labelled TMSS-HLG, others Skeeter Hawk. I think the Skeeter Hawk stuff is a later version. The title block to the later version credits David Frazier, Mark Kummerow, and Herk Stokely.

Along with the paper plans he sent me back in '95, Herk also sent me a smaller copy of a later version. The files he sent seem to match the earlier drawing. You'll find a rough scan of the later one among the files here on Outerzone. Herk wrote, back in '95, that this was a later version than the printed drawing he sent me and to take the details from it. He wrote that the the outlines were the same, except for the vertical stab and rudder. The newer drawing shows 1/4" taken off the leading edge of the fin and added to the rudder. A quick and only approximate check of the v-tail seems to show that it doesn't have enough area to be equivalent to the fin and rudder on the t-tail version. Using the method at the end of this note, I got 12 percent less area, but my measurements weren't terribly precise and I didn't account for the sweep. You might want to check for yourself.

The spar shown is 3/8" X 3/16" spruce for the inner panels. That's rather heavy, yet not "made for Joe Wurtz to launch." (I saw Joe Wurtz launch sometime in the late '80s. Herk is right.) It might be lighter and stronger to make a spar out of end grain balsa capped with thin carbon strips. One could also taper the spar and strips as they get further away from the center. Even with the carbon, I don't think this design is suitable for discus launching.

I'm guessing that if the balsa is selected carefully and the radio gear is more recent and much lighter, it might be possible to get this under 250 grams. Just the thing for people who don't want to put an FAA number on their model. Maybe with a slight reduction in size, or a slight redesign, an electric version could be under 250 grams as well.

Herk's note said that the shapes of the ribs were the SD7037 thinned about the camber line to 7 percent thick. I checked this out with Profili, which, in part, is a user friendly interface for Xfoil. According to the program, if the camber was also reduced to 2.3 percent, the model would be faster, which might be useful in the wind. For hand launch, more wind, or just for ease of building, the AG03 ought to be better. Of course this is all fantasy since the covering sags between the ribs, so take these comments with a grain of salt.

The issue of V-tail size and angle came up several times at the last meeting. Below is a short blurb on converting a conventional tail to an equivalent V-tail and vice versa. - Mark
To convert a conventional tail into a V-tail:
A_vtail = A_vertical + A_horizontal
angle = arctan[ sqrt( A_vertical / A_horizontal ) ]
Notes: "A_vtail" is the area of both halves together, rotated flat. "angle" is the V-tail's dihedral angle from the horizontal.
To convert a V-tail into a conventional tail, use the reciprocal formulas:
A_horizontal = A_vtail * [ cos(angle) ]^2
A_vertical = A_vtail * [ sin(angle) ]^2
These formulas are strictly correct only for large tail aspect ratios, since they do not account for the local interference and lift cancellation at the V-tail roots during yaw or "rudder" application. But they are much better than guessing."