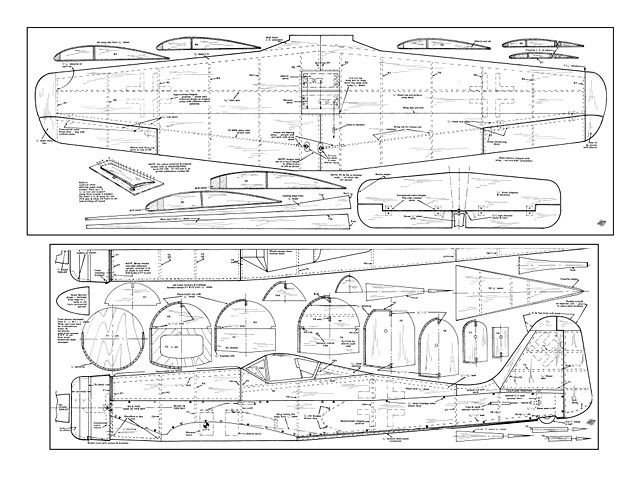 Having long been interested in R/C scale model aircraft, especially WWII types, I wanted to design a simple, all-sheet, quick-build fighter, suitable for a two function R/C system and which could be hand-launched to obviate the necessity for retractable undercarriage. To simplify the project further I also wanted to use a standard commercial silencer, but without it 'hanging out in the breeze'. This restricted my choice to a radial-engined type.

After searching through piles of reference books, it became apparent that very few types fitted the bill, either through not having a 'clean' underside on which to 'deadstick' belly-land, or else were very short-nosed, leading to CG problems. My list whittled down to about half-a-dozen aircraft, at the top of which was the Fw190.

Construction. Tailplane. To expediate later construction it is advisable first to build the tail unit. The tailplane is simply cut from sheet and sanded smooth. Fit a cut-down commercial elevator horn, and hinge and peg the elevators in position. Build the fin and rudder as separate items, rounding off the rudder leading edge to increase the scale effect. At this stage omit the fin leading edge sheet.

Wing. Design is one-piece construction, ie wing permanently attached to fuselage.The wing construction is carried out basically on the bottom sheet skin. Cut out the lower wing skin to the planform minus the wingtips. Pin this down and mark the rib and spar positions. Glue the rnainspar in place, then the leading edge, aileron leading edge (pre-drilled for the torque rod), rear 'sub-spar and finally the ribs, cutting to fit either side of the main spar. Next fit the preformed aileron torque rods and bearings, but do not epoxy the end to the aileron spar at this stage. Remove the assembly from the board and sand the leading edge, aileron and rear spar to follow the rib curvature. Do not round-off the leading edge.

Cut the top skin slightly oversize at the leading edge. Using white glue, fix the top skin in position lining up at the trailing edge, Set up on the building board as shown on the plan to in-corporate the 'washout'. Leave for 24 hours to dry. Remove from the building board and build the opposite wing panel to the same stage. Check that the washout is equal in each panel. It is more important to have equal washout than it to be exactly the amount indicated on the plan.

Now add the wing-tip blocks, carve and sand these to shape. Round-off the leading edge except for the centre section. Carefully mark ailerons and cut them out. Radius the leading edge and cut all hinge slots. Now apply epoxy adhesive to the aileron torque rod and at the same time hinge the ailerons to the wing. Cut out the top skin to clear the servos. It is as well to complete the servo linkage at this stage, removing the servo before further constructional work is started. Sand the wing smooth and lay aside.

Fuselage. The fuselage is conventional in construction. Assemble the sides, doublers and formers F1-F9 in the usual way. Add the strip crutch pieces. Spot cement hatch formers H1-H4 in position and glue in the hatch crutch pieces. Now fit Fit F10, followed by F4a and F5a..." 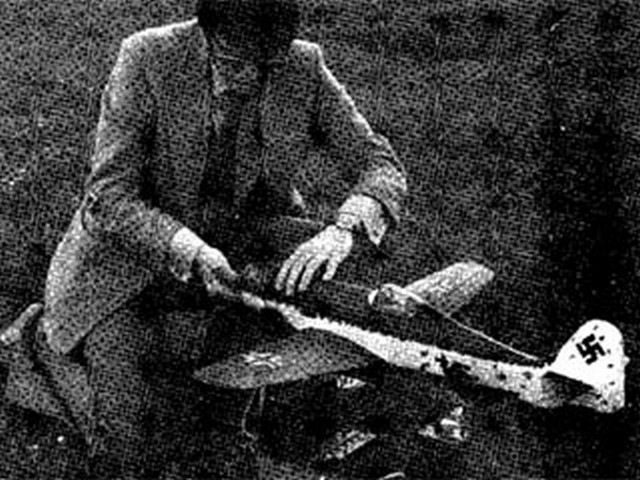