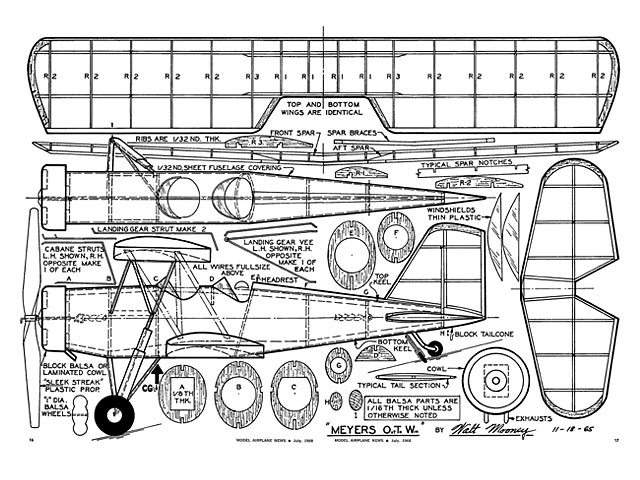 Quote: "All of you small, scale powered aficionados should have a ball with this latest in the line of scale rubber machines by California's old Perfessor of free flight. Meyers OTW, By Walt Mooney

The Meyers OTW (Out To Win) is a classic biplane. It has been used as a Trainer, a Sportplane, and a Glider Tug. There are a great number of Meyers lovers although there were not a lot of OTWs made. It has an aerodynamic set up that makes it ideal for a small flying model. There is plenty of vertical tail area and a relatively long landing gear in addition to quite a good separation between the wings.

Model in the photographs was built during my spare time at the 1967 Nats. Several features may surprise Meyers enthusiasts. It has parallel interplane struts, and it has an engine cowl depicted. Most Meyers have N struts and a radial engine that is out in the breeze. This model was drawn up from a three view of the prototype and is accurate with the exception of the enlarged horizontal tail area. The flying propeller is oversize and all the rigging wires have been omitted. A cowled engine is easier to simulate than a uncowled radial and the flying wires add lot of drag in a model of this size.

One feature that attracts all eyes is the simulated metal covering. This is three mil mylar with vacuum deposited aluminum on one side and adhesive on the other. Pin holes are used to indicate rivets. The mylar is attached over one thirty-second thick balsa fuselage covering in several separate pieces and the seam overlaps and pinhole lines make a very effective simulation of the real plane's metal fuselage.

The fuselage is probably the most difficult part to make, so start here. The fuselage is composed of a top and a bottom keel and a series of formers. Cut out the keel pieces and formers making sure the former notches are accurately cut for a snug fit and properly aligned on the keels. Cement the formers to the keels. Note that the keel should continue across the cock. pits. They will be cut away when the cockpits are cut out of the covering.

When cement holding the formers to keels is thoroughly dry, add short pieces of one sixteenths by one eighth balsa be-tween former B and former C where the cabane struts will later attach. Then by trial and error, make up bond paper pat-terns of the fuselage covering in three pieces for each side from keel to keel. One piece goes from A to B, one from B to E, and one from E to H. When you are satisfied with your patterns, select a soft sheet of 'A' grain one thirty-second thick balsa for covering sheets. 'A' grain has the grain crossways to the thickness of the balsa sheet and is therefore easier to wrap around the fuselage formers. Even so, you may find it necessary to wet their outer surface to bend enough to fit the smaller formers. Cement the covering in place.

After cement is dry, carefully cut out the two cockpit openings. Also cut out the opening for the horizontal tail. Note tail to allow some tail angle adjustment.

Block for the combination noseblock and cowl can be laminated from several thin layers of balsa or it can be carved from a single block of the required thickness. The original was turned on a hand drill using medium sandpaper for a lathe tool. To do this, your block must be exactly circular to start with. Then you put a screw through the exact center of the block, tighten a nut on the far side, and chuck the assembly in the hand drill. Use the sandpaper carefully to get the correct contour on the front of the cowl. A corner of the sandpaper can be used to undercut the front face of the cowl.

Cement a rectangular piece of balsa on the back of the cowl to just fit in the opening in former A. Use a length of one sixteenths diameter aluminum tubing for a propeller shaft bearing and using some freely fitting wire make up the front hook and install the propeller.

The mylar covering will stick better if the covering of the fuselage is first given a coat of clear dope and is then sanded to remove the surface roughness. Most of the existing OTWs have been painted so the mylar is not really necessary but it's so nice. In larger cities, it should be available at plastic retailers. Perhaps you can even get a sample large enough for this job. Use your paper covering patterns to cut out the mylar and be sure to allow about a sixteenth of an inch of overlap.

Carve the headrest from a piece of three-sixteenths by three-eighths balsa. Sand it smooth and cement it to the top center line of the fuselage. Carve the tail cone from balsa and fit it in place but do not cement it until later.

The wings use egg-crate construction. This is only slightly different from standard procedure in that the spars and the ribs are both full depth and notched about half way through where they intersect so that they interlock when assembled. Each wing will have to be built one side at a time because the spars are continuous full span and therefore only one side can be pinned down to the work board. Because of the division necessary to fit full size on two pages of Model Airplane News, the wing and spars appear to be in two pieces; they are not, cut the spars out of a single piece of one sixteenths thick sheet balsa. Note that the front one is constant depth except at the tip taper but that the aft spar is cut down in the area of the wing cut out. The spar braces should be hard balsa.

Both the top and bottom wing are identical. The leading and trailing edges are one sixteenths by one eighths balsa strip with the trailing edge flat and the leading edge set on edge.

After assembly, the wing structure should be carefully sanded to remove all roughness. The leading edge should be rounded and the trailing edge tapered to the section indicated in the side view. Round off the edges of the wing tips and the wing cut outs.

Both the vertical and horizontal tails are built one sixteenths thick on the top of the plan. Then, soft one sixteenths square pieces are added on top and bottom of the tail ribs. These are sanded to give the typical tail section shown.

Cover wings, stabilizer and rudder with light weight tissue. Spray lightly with water to shrink the covering tight. Then, when they are dry, give them one coat of clear dope thinned about half and half with thinner. If you like numbers on the wings, add them now. Either cut them from tissue and dope them in place or use decals. The original model has white tissue wings and empanage and uses black trim and black decal numbers. The surface outlines are easy to put on at this point before assembly with the fuselage, (the old prof. always forgets until later), so add them. India ink makes nice lines but a thin black felt pen or ball point can be used. The ailerons only go on the bottom wing.

The wire struts are bent next. These must be accurately done if the model is to assemble correctly. One thirty-second diameter or thinner music wire should be used. Note that only the left landing gear Vee and cabane strut are shown. The right hand ones should be bent in the opposite direction..." 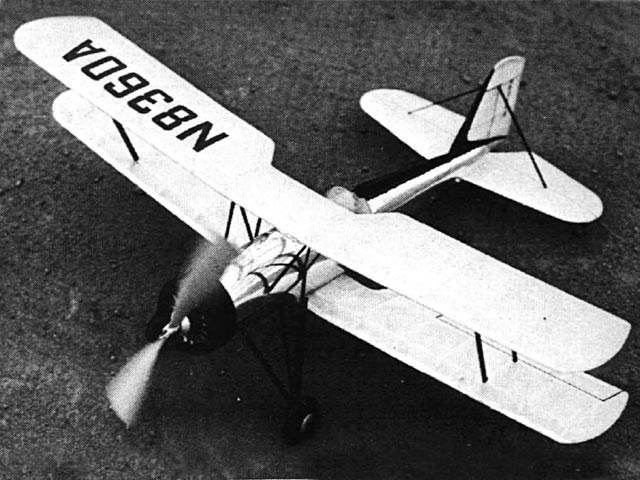