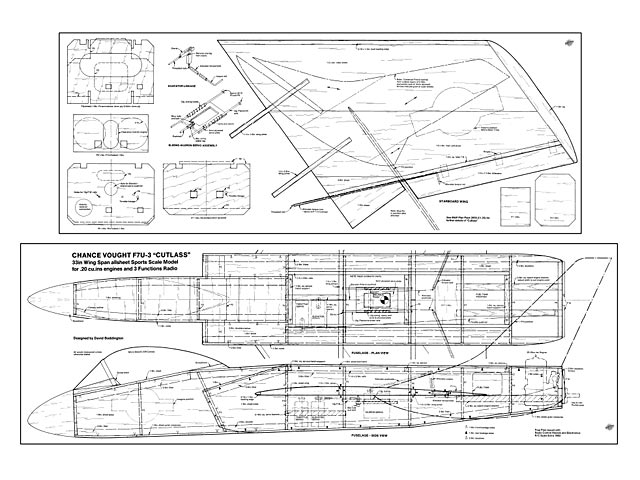 Quote: "THE 1950s were an exciting time for the development of jet fighter aircraft and aircraft designers throughout the world were experimenting with radically new designs of all shapes and configurations. One of the strangest aircraft to reach production status was the Chance Vought 'Cutlass' designed for the American Navy for carrier operation. Their first efforts at producing a jet fighter were not auspicious, the F6U Pirate turned out to be slower than their piston engined F4U Corsair! In the late fifties they had tremendous success with the Crusader, and the Cutlass fitted in between these two jet designs: being too late to see service in the Korean war and obsolete by the Vietnan conflict.

Bedevilled with engine prloblems during he initial stages and having a poor safety record. The Cutlass was not an unqualified success (sometimes referred to as the 'Gutlass Cutlass'); but it did notch up a few notable firsts. It was the first tailless jet aircraft in service in the USA, the first of the Navy swept wing fighters and the first to incorporate twin jet engines with afterburners.

Chance Vought's may well have been influenced in the design of the Cutlass by some of the German WWII projects of Messerschmitt and Lippisch, but the eventual layout was very much their own concept. A number of fatal accidents during test flying - and panic ejections by service pilots unused to different control reactions at slow speeds - led to the aircraft having a somewhat dubious standing amongst Navy pilots. By the end of its service life it was generally well accepted and considered to be a rugged aircraft (momentary readings of +16G and -9G being recorded) and it coped well with the transition from gun armament to missiles.

No flaps were fitted to the 'Cutlass' and full span leading edge slats were employed for slow speed landings. Although the Cutlass will not be remembered as a classic jet fighter of its period it was a genuine attempt at producing a carrier borne aircraft, of non-conventional design with a substantial improvement of performance over its predecessors - it only just failed to do this.

The Model: A glance at scale three views of the Cutlass will quickly show you that this R/C model definitely comes into the 'sports' scale category. No attempt has been made to accurately reproduce the air intakes and exhaust outlets or to keep to true wing and fin thicknesses. Simplified construction has been incorporated, ie sheet wings and rounded box fuselage, so that the building time is relatively short: commercial items such as the canopy and transfers are not precisely to scale but are near enough to give the flavour of the aircraft. Truth to say, the Cutlass is such a unique aircraft that even this semi-scale version will be instantly recognisable and it does at least possess all of the character of the prototype.

So, if you feel like trying something different - and there are not too many scale flying wing, twin finned, pusher models around - have a go at this all sheet 'Cutlass'.

Fuselage: The two obvious differences between this model and conventional types are the combined elevator and ailerons (ailevators) and the pusher engine. Fitting the engine at the rear only gives problems relating to the balance position of the model - you may have to add some nose weight. You will also require an 8 x 6 pusher propeller and a 'dumpy' silencer for the 20 site engine. Aileron/elevator mixing is taken care of by a simpole servo sliding mechanism..." 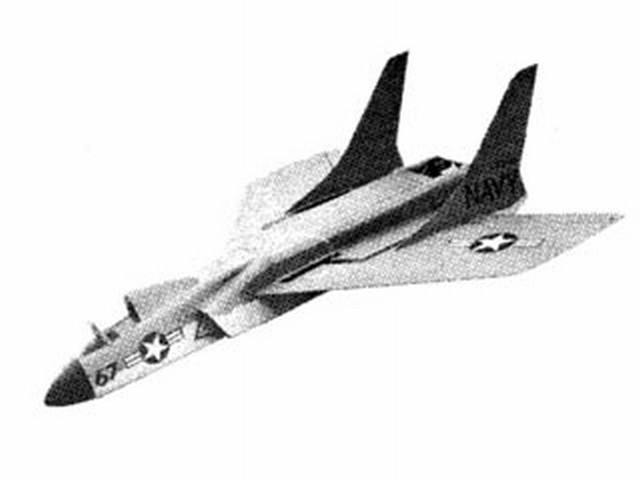