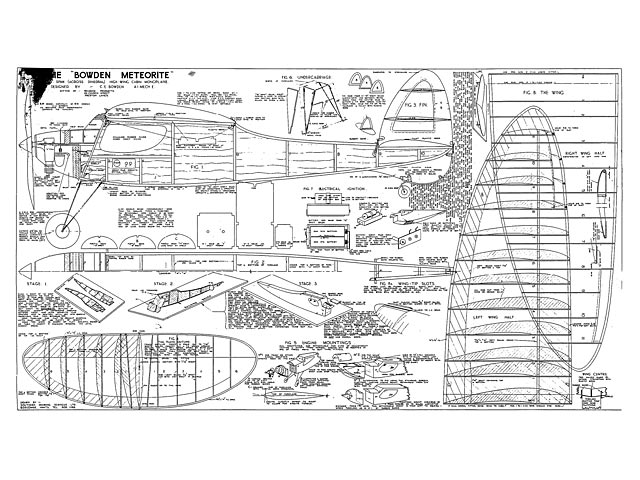 THE SMALL VINTAGE 'Meteorite' high wing monoplane has given me, and I hope others too, a lot of flying in its day when free flight was the thing. Later in its life when single channel right radio became available this was installed with success. I suppose the model's greatest asset was its stable free flight for a small model, for it is well known that in free flight a small model is a greater problem to get stable in gusty weather than a large model which tends to iron out turbulence better.

It may interest vintage minded readers to hear how I came to design this small machine of only 45-1/2 in span and 34-1/2 in length, with its eliptical wing of light loading and relatively large chord of 10 in, and also fitted with 'letterbox' wing tip slots which were then a novelty on my models. If properly made and equally gapped these wing tip slots make for remarkably stable models with a great resistance against dropping a wing in free flight, or for that matter on radio control models too.

Another peculiarity for its day was the rugged 1/16 in lightweight balsa sheet covered fuselage built over the plan so that angles of incidence of wing and tail unit were automatically built in for ease of construction and in the interests of reliability. It might also be mentioned that the elliptical wing form, apart from being a known efficient shape, has a relatively large central chord to encourage the air to flow around the wing section, rather than jump it should the model fly faster than intended. However I want to emphasise that this model was designed to be a slow speed flying machine using very limited power to suit the engines of its time, and not in any sense in the modern trend where much more powerful modern engines are used together with correcting radio to ensure stability.

Well before the days of the Meteorite my initial power models had to be large with light wing loadings for the very simple reason that there were no light weight model aero engines available in this country. As no-one had successfully flown a petrol driven model since Stanger's original record flight about 18 years before, I decided I must construct a reliable petrol engined model aircraft. And furthermore the few likely reasonably light engines that might be converted had to come from the model powerboat field, and these were not powerful by today's standards, although some were quite reliable. Therefore initially in 1932 there was only one feasible avenue down which I could pursue my aim of successful petrol flight, namely by making a reasonably lightly loaded easy-to-fly model, capable of carrying a Wall two stroke engine weighing 2-3/4 lb, plus an 11 oz coil and 4-1/2 oz flight battery.

A little later around the same period Maxwell Basset in America put up long record power flights with the added advantage of a really lightweight 9 cc Brown Junior engine which became available over there. As I had been flying full-size Sopwith Pups and SE5 single seater biplanes in World War I, I was naturally biplane orientated and decided to produce my first record machine 'Kanga' as a biplane which would keep the wing span down to 7 ft for transport reasons. Later Edgar Westbury at my special request, produced a considerably lighter but rather bulky 14cc two-stroke engine called the Atom Minor, which gave me some trouble because of its mixing valve, until I fitted the engine with Rankine's float chamber baby carburettor, and we increased the power quite a lot. The engine put up an out of sight record flight in my 8 ft span Blue Dragon monoplane, taking off from grass at Fairey's Great West Aerodrome (now the great London Airport), and disappearing into the clouds towards Staines. Curiously this official record I believe has never been broken, for power flying rules were changed later.

It will be realised therefore that lightly wing loaded models were essential to carry the early weighty engines with limited power which were available in this country. Also it must be remembered that models had to take off from grass aerodromes, for the beautiful tarmac surfaces of today did not exist. Big propellers operated by the then slow revving engines helped in this ROG problem.

2. A change in scene took place as engines came down in size and weight.

Models became more practicable for many to transport. America was the first to set off the trend towards smaller and smaller engines and ignition coils for their spark ignition. Tiny engines like the very light little 2.5 cc Elf and the Arden and many other baby engines emerged, whilst various British manufacturers replied by producing a variety of little spark ignition motors, many of which one must admit had very little power to fly anything unless the wing loading was very light and the airframe structure very simple. I flew most of the American and British babies in my very simple little Porrlck Puffin monoplane. Although the scene had drastically changed towards smaller models, all the early spark ignition problems were still with us, which now are solved by the modern Ni-Cad batteries.

3. A truly lightweight era dawns in the early glowplug and diesel period.

The small glowplug engine took over from the spark baby motor, added the early diesels. The latter to be more correct, were compression ignition engines fired with the aid of ether in the fuel rather than using the normal full-sized diesel fuel injection system. The cutting out of spark ignition weight and complication made the light-weight model an attractive proposition, although engine power was still low compared with today's engines. To give some idea of how the baby diesel swept the field, I wrote a book called 'Diesel Model Engines' which promptly had four reprints. Diesel engines of all types and sizes were introduced for a period, until the modern glow engines graduallly took over the scene, although we must not forget that today there is a strong resuscitation of the diesel.

It was a little Frog 1 cc diesel, and a 1 cc ED and 1.3 cc Mills diesel which originally flew my first Meteorite model well, for although these engines and their like may not have been very powerful compared with those available today, the lightish wing loading of the Meteorite flew well on only 1 cc or thereabouts. Its detachable nose permitted all sorts of little engines to be clapped on and tried. For instance the 1 cc Frog weighed only 3.2 oz, whilst the 1.3 Mills diesel weighed a mere 3.5 oz.

Thus it was the small diesel that really inspired the Meteorite design, for here was a chance to produce a reasonably pleasant to look at little cabin monoplane which I decided should be really light but robust, and also capable of flying in reasonably poor weather if desired because of its resistance to knocks. The model should be small enough, and sufficiently damage proof to be thrown into the rear of the then most common type of open tourer car. It was before the days when almost everyone came to own a big closed car - and many enthusiasts actually cycled to the field of their activities laden with a big three-ply box full of detachable model on their backs. More damage was often done during transport than in flying activities.

Therefore, the 'Meteorite' had to have a sheet covered fuselage finally covered by silk or very thin nylon and doped with full-strength glider dope,which is a system I personally favour even today for small and large models. And please do remember NOT to overweight your little Meteorite by massive coats of paint. It is a flying model and not a display model! Hand launching was then usual because one could fly from fields, for farmers had no need to wire off their fields when motorists were few. The whole world was not yet awheel. Farmers did not object to one's flying in their fields, and in many cases came to watch this unusual spectacle of model flight. It was in these general circumstances which the little Meteorite was born to suit ihe times, and she inspired a sister baby biplane and a baby flying boat.

It was decided that everything should be detachable, and held on by simple wire hooks and rubber bands, which included the wing, the tail unit, the undercarriage, and the detachable engine nose piece. The latter had its advantages, for it made it vary simple to change the type of engine quickly, as well as saving damage to a motor, and it allowed one to pack in a tittle down thrust, and offset of thrust to absorb excessive engine tououe, etc, during the tuning-up operations. The Meteorite is initially tuned to be a first class straight and floating glider, before power flying is attempted.

As time went by quite small light radio single channel sets became available, if not initially very reiliable! Therefore I tried most of these on the 'Meteorite flown by a Mills 1.3 diesel, getting some fine flights and landings back to base. Latterly I have fitted a little, very powerful, 1 cc OS lightweight glow motor, allied to a very light Cannon radio set providing rudder tab, elevator tab trim, and throttle control, taking great care not to fly with more than a well throttled-back engine! In this way I was able to fly around myself watching the flying and not scouring the sky for a remote speck in which l had no interest. So should you adopt such luxury flying, do remember that the wing section etc of the little Meteorite was designed for slow flight. The model was meant for realistic flight and not to be blasted around the sky at unrealistic speeds."

Article, thanks to Sundancer. Note this article is from Aeromodeller Dec 1982, so is much later, but it is written by the man himself, CE Bowden. 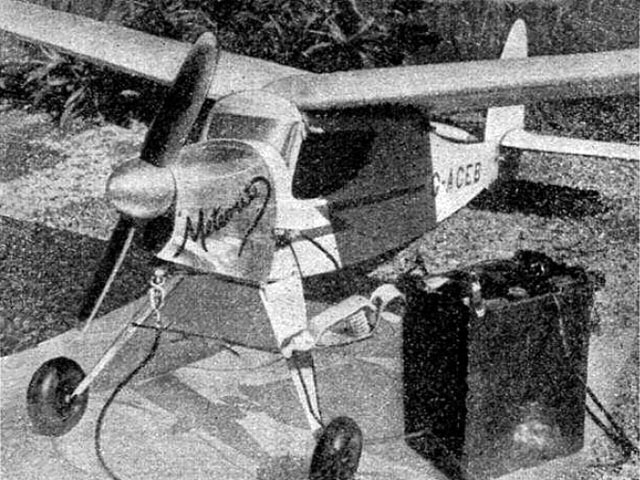