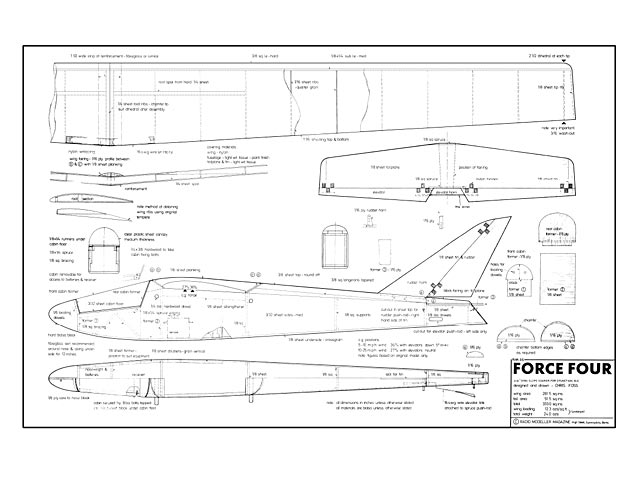 WITH the popularity of slope soaring continually on the increase, there is now a growing number of attractive scale and semi-scale sailplane kits on the market to cater for the needs of multi and proportional flyers. However, when we consider single channel the trend is far less apparent. For, with the limited control of rudder only, comes the necessity for inherent stability. This reduces the chances of the design bearing any great resemblance to full size machines, by dictating the use of such features as relatively low aspect-ratio, generous dihedral, and large tail area. Nevertheless, I was convinced that this need not be the case and, accordingly, set to work drawing up a single channel slope soarer, that was principally pleas-ing aesthetically bit, at the same time, reasonably simple and practical - also it must fly.

So Force-four was born. The wing spanned 55 in in its original form, using very simple but rugged all-sheet construction and incorporating generous washout to prevent tip-stalling. From the aesthetic point of view, the fuselage was given most consideration.

A transparent canopy was a must and, by continuing the line of the fuselage over the wing as a fairing, a pleasing clean result was obtained. For practical reasons the wing and tailplane were secured with rubber bands, a detail only apparent at close quarters and rendered invisible once airborne. RCS Guidance System equipment was installed, operating an Elmic Compact escapement - modified to operate push-rods on both controls, eliminating the usual torque-rod business at the rear end, together with the rather vulnerable under-slung tailplane. As the 'kick' elevator only works in one direction, 'down' was considered far more useful on a slope soarer than 'up'. The Compact gives a little left rudder with the kick-down elevator so, to counteract the tendency to turn during a dive, only the left-hand elevator was used. The right-hand one was fitted with a trim adjuster.

Flying characteristics: Having described the logic, or otherwise, behind the design of Force-four, the question now is - How does it fly? Well, despite its scale-like design features - shallow dihedral, high aspect-ratio, short moment-arm and small tail area - the stability and general flying characteristics were extremely satisfactory. Smooth turns showed a slight 'grooving' tendency, the tip washout completely ruled out any tip stalling, and the stalls themselves were gentle, with good recovery. The occasional pilot error during initial familiarising flights, however, was sufficient to prove it wouldn't break in a hurry! The value of the kick-down elevator was soon realised - no more frantic attempts at landing on the slope, for a touch of 'down' at the right moment can effect a very neat and gentle landing. In windy conditions, a few short pulses of down can be very useful to push out from the hill and away from any turbulence. Finally, on occasions, the elevator has been used to build up enough speed to perform what could loosely be described as a loop, a manoeuvre for which one requires either a great deal of height or a particular liking for climbing up and down hills!

All good things come to an end; so did Force-four. Hitting a barbed-wire fence at around 45 m.p.h. (it was flying downwind at the time), was sufficient to cause total destnicdion of the flying surfaces, whilst the fuselage, with all the expensive electrical glib-bins inside, escaped with only a scratch or two.

A frantic building session fol-lowed. A new wing was built with an extra 3 ins, on either tip, bringing the total span to 61 ins. The increased aspect-ratio made a more attractive model, whilst the extra area was foreseen as being useful in marginal conditions. Nylon covering was used - the original was tissue covered - so, in the event of another disaster, I would at least have a nylon bag to keep the pieces in.

In this latest form, Force-four has been flown on every possible occasion (it was my only slope soarer at the time!) on a varied number of sites, ranging from ant-hills upwards, in all winds between the near-calm and the ridiculous. It has never failed to produce favourable comments from both fellow modellers and interested onlookers alike. (Presumably the unfavourable remarks are never uttered loud enough for me to hear!)

From personal experience, the most arduous task in flying a glider with an escapement comes when I have to explain to an uninformed, but curious, layman, why it is necessary to wind up the 'elastic band', having just told him that the model is in fact a glider.

Now, providing you have had some previous experience at button pushing, you will (I hope!) want to start in and build Force-four. If however, you are a complete beginner, put aside the idea for a while and build one of those functional, ultra-stable, machines I mentioned in my first paragraph.

Construction: Wing. The wing sheeting is best cut from 6 in wide 1/16 sheet, alternatively 3 in or 4 in widths can be used and butt-joined. If there is any difference in densities, the softer sheets should be set aside for the top surface. Start with the bottom panel, check the front edge is straight, then attach the 3/8 in sq LE - using balsa cement if you are quick - and check that the undersides are flush before it sets... "

Article pages, text and pics, thanks to RFJ. 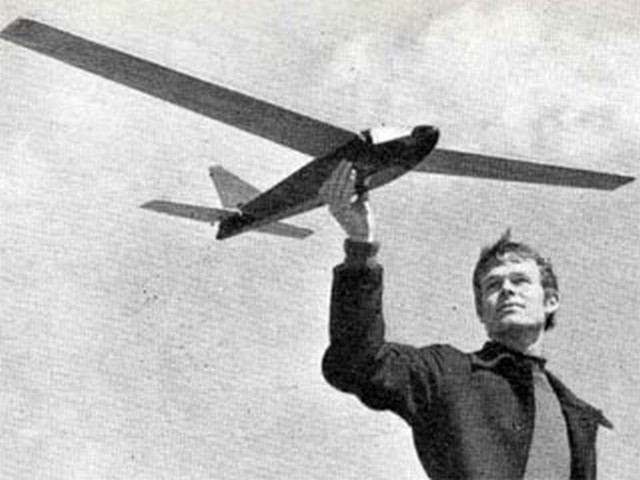 Thanks a lot for yet another nice and interesting plane. Again it makes me want to stand up, leave work and start building. Thanks for what you're giving us.
Hubert - 18/03/2016
Add a comment