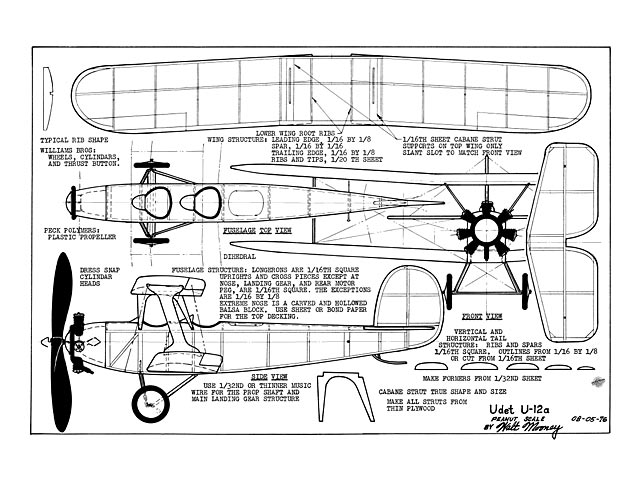 Quote: "Ernst Udet's U-12a Flamingo, by Walt Mooney.
Still considered one of the best light aerobatic aircraft ever built, the Flamingo was the brainchild of Ernst Udet, the legendary WW1 German ace and top aerobatic pilot of the '20s and '30s.

On page 112 of Aircraft Profile 257 is a view of the U-12a that this Peanut is meant to depict. A-113 was a BFW-produced aircraft belonging to the OLAG Flying School in 1932. This profile gives a lot of detail on the many variants of the Flamingo, and I picked A-113 for its yellow covering, black numbers, and red and white candystriped struts.

The original model flies quite well, but being a biplane, will probably do less than 30 seconds unless built very light. The model in the photographs weighs 3/4 of an ounce ready to fly. It has plastic wheels, propeller, thrust bearing and cylinders, all of which make it slightly nose heavy. Re-placing all the plastic with wooden items would save some weight.

Structurally, the model is a classic biplane. Balsa is used almost everywhere. The cabane struts supporting the upper wing center section and the interplane struts between the wingtips are 1/64 ply-wood. The landing gear struts are bass-wood.

The engine uses Williams Bros cylinders. For cylinder heads, we used dress snaps. They're not exact scale, but they do give a nice appearance. (I stole this idea from John Oldenkamp. I was impressed by how good they looked on one of his models.) The exhaust collector ring was simulated with 1/8-inch diameter plastic wire insulation. A strand of thin copper wire was used to tie the loop and extends back along the single exhaust pipe between the two bottom cylinders.

All flying wires are 2-pound test monofi lament fishing leader. Make a hole in the struts at the appropriate places before assembly to make installing the wires easier. A small drop of cement at each in-tersection of wire and surface makes the installation permanent. Painting the dried cement silver makes it resemble a metal end fitting.

The ailerons, movable tail surfaces, and baggage hatch are simulated with India ink. This can only be done after doping the model, otherwise it will run in the tissue.

The entire model is covered in yellow tissue. The struts and rudder are painted red and white. The wing numbers are 7/8-inch tall; the fuselage numbers are 9/16-inch tall. These are cut from black tissue and doped in place over the yellow tissue with very thin dope after the covering has been shrunk and doped once.

The model in the photo requires about a 1/32-inch of downthrust and flies in left circles under power." 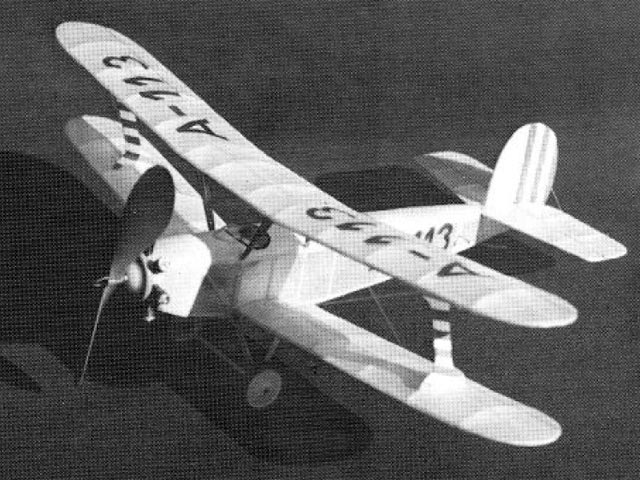