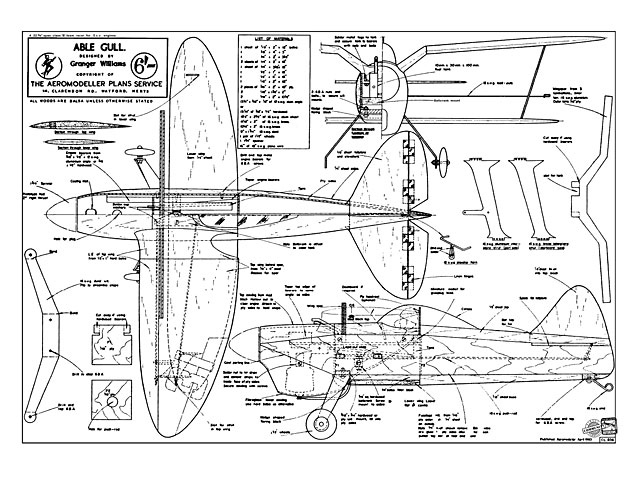 Quote: "There's many a fresh idea in this new style Class B team racer from USA. Able Gull, by T Granger Williams.

As an advocate of all metal Team Racers for several years, (see P.177, Control-line Manual), Granger Williams decided to build a Team Racer of wood for a change, in order not to get into a construction rut. He wanted an aeroplane that was small, light, fast, manoeuvrable, and with the clean lines of a racer. All of these requirements were realised in Able Grill, so named because of its gull wings and ability to the up to its designer's needs.

The basic plywood frame of the model makes it rigid and strong without too much weight. Finished model weighs just twenty three ounces. To start construction, cut two 1/16 in sheet plywood sides, note that they taper to a point on the thrust line just behind the spinner and are a full 18 in long. Now cut two 1/4 in sheet balsa sides the same size and shape as the plywood sides (do not cut out slot for hardwood U/C mount) and lay them aside for later use. Cut two 1/16 in sheet plywood bulkheads F1 and F2 as shown on the drawing. Here is where one must decide the type of engine bearers.

Cut wooden engine bearers from 3/8 in by 1/2 in hard maple or birch and glue them to the plywood sides in the proper position. For those using metal engine bearers, cut them 3/8 by 1/2 by 12 swg, aluminium angle. Taper the 3/8 in wide leg from the control horn mount, to the aft bulkhead as shown. The 1/2 in leg of the angle is tapered from the forward bulkhead, forward to match the plywood sides. Drill and tap the holes in the angles as shown, and drill holes to match in the plywood sides. Screw the engine bearers to the sides in proper alignment. Block up the sides and F1 and F2 on a flat area and check for alignment, then glue the formers in place. If you can get hold of some pattern makers leather fillet material, glue this in the corners where the sides and formers join. The leather fillet will increase the strength of the fuselage tenfold.

While the glue on the fuselage is drying, cut two wing spars from 1/16 in sheet plywood and one from 16 swg aluminium. Drill a number of holes through the aluminium spar for glue penetration and using white glue, epoxy, or contact cement, sandwich the aluminium between the two plywood spars and clamp tight. While the spar is drying, cut the C/C from 16 swg Dural. File the U/C legs to a streamlined shape and bend to match the drawing. Drill and tap holes for the wheel screws and drill holes for the mounting screws.

Now cut the wing struts from sheet metal, the Star-board or outboard strut from 16 swg brass and the port or inboard strut from 16 swg aluminium. The difference in weight will have the same effect as adding lead to the outboard wing tip. The holes in the ends of the strut tabs are for glue penetration when they are assembled in the wings. Now we will go back to the fuselage. Pull the tail of the fuselage sides together and bevel the corner until there is a flat area for a good glue joint..."

Article pages, text and pics, thanks to Aeromeddler. 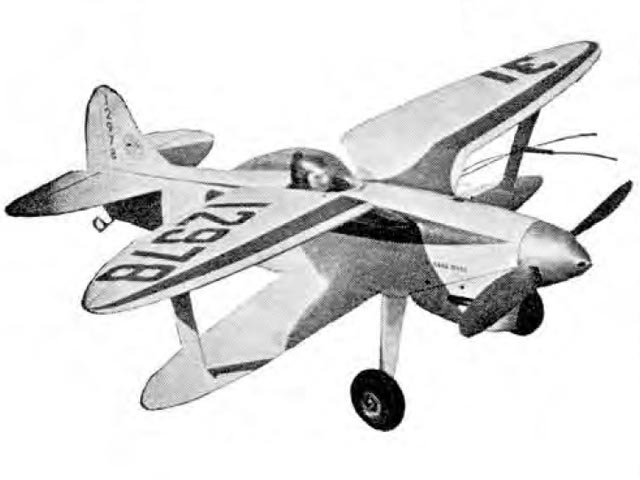