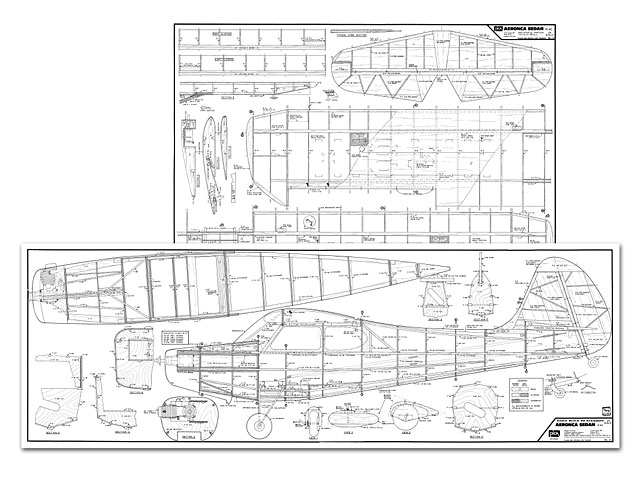 Hey! Are you a little tired of all the Cubs or Cap 21's that you see at the field? Everywhere you look, Cubs, Caps, Cubs and Caps. Now don't get me wrong! I've built many of them and I've enjoyed them all - Cubs from the earlier free flights to the current crop of quarter scales and they are all great models. But now, there is something new for you. Pica Model's Aeronca Sedan.

Ahhh! I know what you are going to say. Just another Cub, but not really. Pica's newest offering has a number of things going for it, not the least of which is an interesting size. The kit is fifth scale, which means that it brings the plane in at an 85 inch span, a little larger than the two inch to the foot 72 inch Cub and a little smaller than the 108 three inch Cub. This new size, coupled with the distinct look of the Aeronca Sedan, a side by side seating set-up and the very distinctive tail group outline makes for an interesting new model.

Consider also, if you will, the engines it requires. The plans call for anything from a 45 four stroke to a 90 four stroke and all the two strokes in between, the average being of course a .61 four stroke. This fact coincides nicely with the current popularity of the four stroke engine. The plans also state the average weight of the aircraft to be somewhere between 8 to 12 pounds depending, of course, on how you finish it. If the plane comes in at between 8 and 12 pounds with a wing area of 950 honest square inches, that works out to an average ounce per square foot a little over 24 ounces, so you can see from the numbers that it's a fine flying project.

As is normal in this particular area, the kit that I built the plane from belonged to another person before it got to me. It seems to be that were constantly trading, selling, or otherwise maneuvering the kits in this area back and forth.

Getting started. It's hard to tell whose it is when the thing is finally built, but when I did decide to start it, I decided to go with the .90 four stroke. I chose my Enya 90 although an Q.S. would do just as fine. In fact, the plans show an Q.S. 90 so it's your choice here. Some revamping must be done in order to install any of the four stroke 90's and although this is not mentioned until later in the instructions, it might be easier to spread the engine bearers apart at the beginning of the fuselage construction rather than shave the bearers later to fit the engine as the instructions call for, and as I ended up doing. Use your own judgment here but that would be my suggestion. I also found the tank compartment, after coating with resin, very tight for the recommended tank with no allowance for the bump the Sullivan tanks now have at the top. While I admit that these are minor alterations, it only stands to reason that they are much easier if taken care of in the beginning stages of construction than after the entire fuselage is built.

For someone with kit and scratch building experience, I found the entire project almost embarrassingly simple. This is not to say joyless to build but the complete pre-cutting down to the last quarter by quarter stick is something I'm just not used to seeing in a foreign or American kit. My first reaction was one of dissappointment at not being able to dive into a large bundle of sticks and cut and fit every one separately, but I soon be came interested in seeing how many of these little parts these guys could cut without a goof. Wow! Talk about precision. When the plans call for a quarter by three eighths by seven and fifteen sixteenths, you better find that little bugger and get it right the first time or you'll be sorry. So keep a ruler handy on the table and check every piece as you go along or the box isn't going to be empty when you're done.

For the older modelers, you'll find the fuse-lage construction much the same as the old rubber powered scale model kits such as Comet, Guillows, or Sterling. The type of construction I'm referring to has the fuselage built upside down on the plans in halves, turned over, and then the top formers installed on the fuselage. A word of caution here. The plan view shows and lists the top formers so don't be confused as you build the bottom half of the fuselage. Be sure to refer often to the side view and remember some formers are reversed to what you may think, so follow the instructions carefully.

I'm going to mention one thing here I wouldn't normally do and that is this. Although this project is extensive and the plane quite large, I believe the beginner could build the plane if, and that's a large 'if', he or she makes up their minds to follow the instructions to the letter. The instructions in this kit are so complete, I'm surprised they don't tell you when to take a coffee break. As I've said, the fuselage builds fast and easily - provided the instructions are followed faithfully. The tail group are of the same construction techniques used with Pica's fifth scale and sixth scale WACO YMF-3 (oz3182) and WACO YMF-3 (oz3269) models, namely an outline of solid eighth inch balsa with eighth by eighth ribs glued to each side and sanded to shape. A method of construction I use in my scratch build projects and one that I find quite scale in appearance.

Let's move on to the wing construction. The wing is straight forward with the flat bottom airfoil making it simple to glue everything together while flat on your building board. Be sure to glue the strut bearers in and make arrangements for the aileron control; sand it up to shape and bingo, a straight strong wing. One note. The center section is not sheeted and the gussets that are called for are required for added strength. Don't leave them out! You might want to get crazy when you're flying this baby some day and actually do a loop, maybe a roll. Expect then, the ensuing crash if you leave the gussets out.

What's left, at this point, is to fit the remaining parts such as the cowl, wheel pants, tail wheel, windshield, and windows. Now the procedure I use at this point is installing the entire radio system, operating it, checking it for binds and direction of throw..."

Quote: "Hi Mary, These are the plans from the Pica Kit. The wing sheet was wider than 36in so I had to do it in 2 passes. I am sure Steve will have no trouble sticking them back into one sheet. Dave" 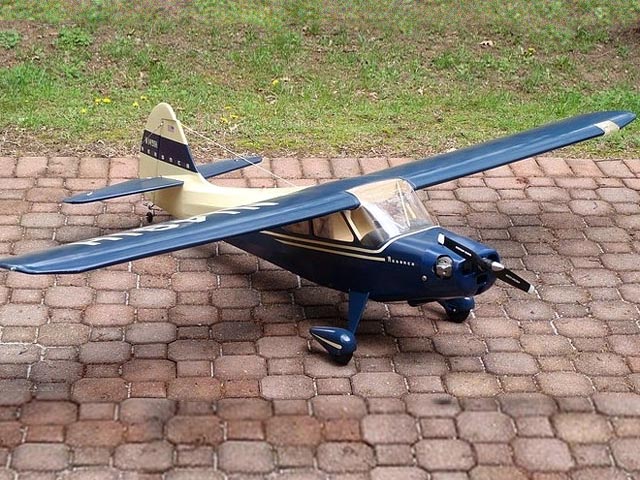 The original idea with the Aeronca project that was entrusted to us (@EAZE RC Hobbies & Gifts) by Rowan & Shirley was to finish it as a Sport Scale Model of N1491H pictured below [more pics 005-015]. Some background on the plane (provided by Rowan & Shirley): "The Aeronca kit was purchased by Peter Mantel from Topflyte Hobbies in Durbanville back in the year 2000. Peter, an accomplished RC modeler (since 1968) managed to complete the fuselage structure and partially complete the wings and tail feathers, before succumbing to cancer, early in 2001. The partially built plane was then passed on by Peter's widow, Shirley, to his best friend and colleague of 25 years, Ian Fraser, to complete. Ian completed all structural building and some of the covering, using the blue heat shrink material in the kit. Unfortunately Ian had other commitments which kept him from taking the project further, so it was decided sometime in 2008 that Rowan Pressley (Shirley's new husband) would take the project over. Rowan (not a modeler) soon realized that that he did not have the time needed to proceed. It was then (mid-2010) that Bernard of @EAZE was approached, on the basis that he could have the plane, provided that he complete it and bring it to a flying state, for Peter's family to see fly on its maiden flight." Browsing through pages highlighting the restoration of N1331H (another Aeronca Sedan based in Switzerland) an important decision was made... this KIT couldn't be completed to mere sport scale standards!!! It would have done no justice to an absolutely astonishing aircraft from the Golden Era of Aviation. Bernard & Petro decided to add some more scale detail and make a little more of the model than what was probably originally intended. The plane is finished and ready for her maiden flight. I will still do more detail work on the cockpit panel & interior after the maiden flight has been done.
Bernard_Petro - 05/07/2017
I have done the maiden flight on the Aeronca Sedan 15AC & she flew like an absolute dream. Powered by an OS FS90 ... which by the way is over the top ... I rarely went higher than 1/3 throttle & the take off was a 1/2 throttle. Awesome aero model ... and a must build scale project for those of us scale modelers. Attached a few shots from the maiden flight day [more pics 016-025].
Bernard_Petro - 13/11/2018
Add a comment