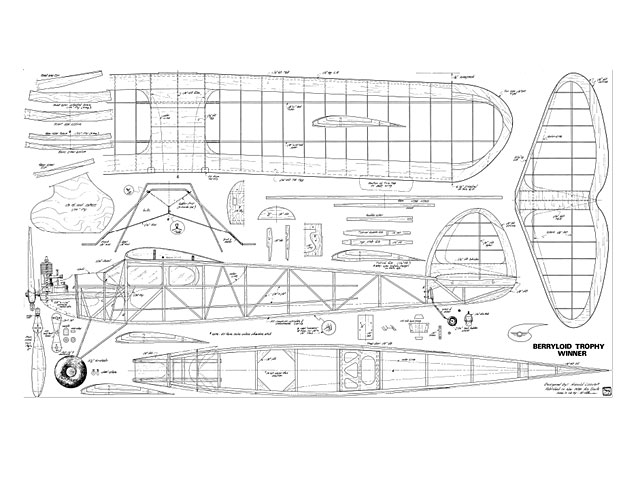 The selection of the 1938 Berryloid Trophy winner for our OT Model of the Month came about in an interesting way. You may recall that we featured a Waco YQC-6 cabin biplane as a Collector Plan in our March '81 issue. This plan for a 3/4-inch scale rubber model came from a pre-WWII Scalemasters kit, and is probably one of the most accurately detailed kit plans ever produced.

What we didn't put together at the time we published this was the fact that the designer of the model, Harold Coovert, was also the designer and builder of the 1938 Berryloid Trophy winner. It took a letter from Bruce Thompson, of Toronto, Ontario, Canada, to bring this to our attention. It seems that Bruce, through relatives, had acquired a sizable collection of Coovert's original drawings, plus many photographs of his model aircraft. As luck would have it, some of these included never-before-published photos of the Berryloid winner, which he sent along to us. Naturally, it didn't take long to dig out the November 1938 Air Trails from our magazine collection, which contained the construction article for this model.

Incidentally, Bruce also sent us Coo-vert's mouth-watering 3/4-inch scale plans for the Stinson Reliant SR-7B 'Gullwing,' another Scalemasters kit plan. Unfortunately, this plan did not include the fuselage formers or the wing ribs (every one was different!) so it seems pointless to present it as a Collector Plan. Got some beautiful Edo float plans, though, and we will present these, as all of the bulkheads are included!

So what's a Berryloid Trophy? Actually this was a trophy sponsored by the Berry Brothers, of Detroit, Michigan, for the National Model Airplane Cham-pionships, to be awarded to the gas model with the best finish, using, hopefully, Berryloid dopes. Oh yes, the model had to fly at the contest to qualify for the Best Finish trophy!

Harold Coovert's skill and workmanship certainly went deeper than the finish on his winning model. Careful study of the plans reveals extremely clean lines and thorough structural design. Basically a conventional cabin model, there are gentle curves and sweeps here and there that set it apart. Note also the built-in downthrust, the single-bladed prop, the swiveling tail wheel, and the forerunners of DuBro wheel collars! And we're sure that Bud McNorgan, editor of the SCAMPS Newsletter, will appreciate what a fine R/C model it would make!

The elusive balance point (BP, not to be confused with CG) for this model is described by its designer as follows: A word about balance. The battery box is shifted back and forth until the nose is slightly heavy. This may be determined by holding the model under the wings, halfway out and [one] third way back, using your index finger. Actually this amounts to about 4 inches back from the leading edge where the wing meets the cabin - a little easier to check than reaching halfway out each wing panel.

CONSTRUCTION HINTS: Note the 1/8 x 1/4 strips glued to the outside of the longerons. These hold the covering out and away from the basic framing, preventing unsightly pulling in of the fabric where the verticals and cross-pieces meet the longerons.

We like to install brass tubing, with appropriate plywood gussets, for the landing gear. This way, the gear can be installed after the model is finished. After the main legs are shaped and soldered together, cut the gear apart at the middle, insert each half into the tubing, and lock it all in place by adding the V spreader.

It might be easier to build the wing by running the spars parallel to the leading and trailing edges. Nick the front face of spars at Rib 1, crack them back to match the sweep and glue. Then make dihedral braces that extend into the second bay beyond the joint. By using 1/32 ply, and possibly laminating two layers, the braces should follow the sweepback without any problem, particularly if held in place with C-clamps until the epoxy hardens." 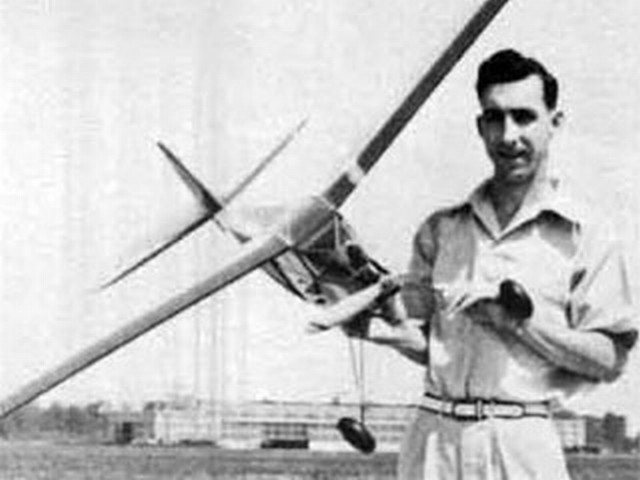