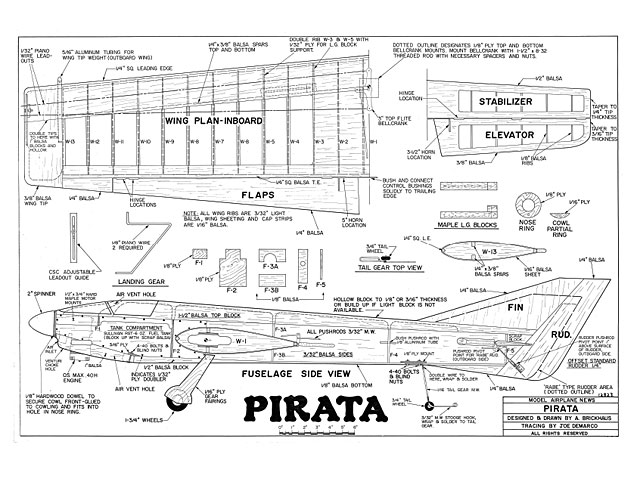 Quote: "Look your best in the air with a smooth, forgiving design and no odd quirks. Pirata, by Allen W Brickhaus.

FIVE SEASONS of flying my Buccaneer 46 (oz6874) were just about enough for the old bird, and I was forced back to the building board. I enjoy building and for this project I decided to dust off my trusty wing jig and build my own wing.

The Pirata is not a monumental breakthrough in the field of Precision Aerobatics. It's easy to build and finish, no special items are necessary for construction, and it's a forgiving bird to fly, with no trimming quirks. It's an average size plane with 560 square inches of wing area, a medium wing loading, and a high power-to-weight ratio all wrapped up in an attractive package.

The basic flap/elevator choice came from two prior stunt planes. Both had the same wing area. Version one was a standard Nobler-type airfoil with 13% flap area distributed equally along the trailing edge. Version two was a thicker airfoil with 14% flap area concentrated more toward the center of the wing.

I used the second combination for the following reasons: The thicker airfoil had better lift and allowed me to use a medium wing loading. The blunter leading edge prevents early stalling of the wing, and by concentrating the flap area more toward the center of the wing at the trailing edge, the model has less wing-tip roll at full deflection of the flaps. This wing/flap combination and an aspect ratio of 5.37 allows the plane to turn a tighter corner with less stall and loss of smoothness, while keeping maneuver speeds more constant.

The stab/elevator is 24.5% of the total wing area and has an aspect ratio of 4.95%. This large area provides stability during level flight and adds to the plane's turning ability. The stab must be built of at least 1/2-inch material for the tail area to lift properly and to prevent dropping in tight corners. The nose and tail moments are nearly standard with today's comparable stunters. They are 9.75 inches from the back of..." 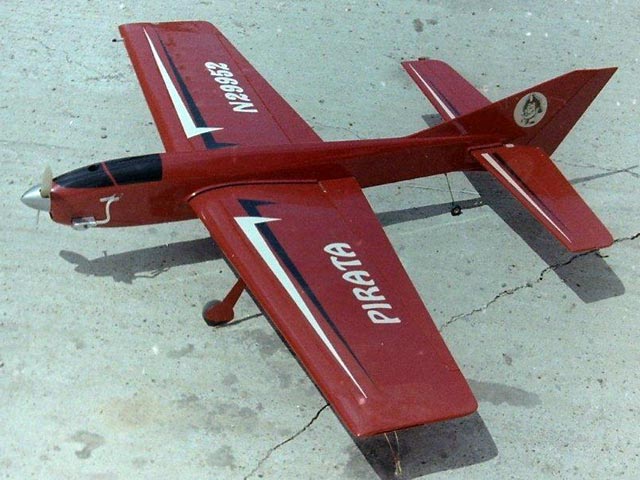