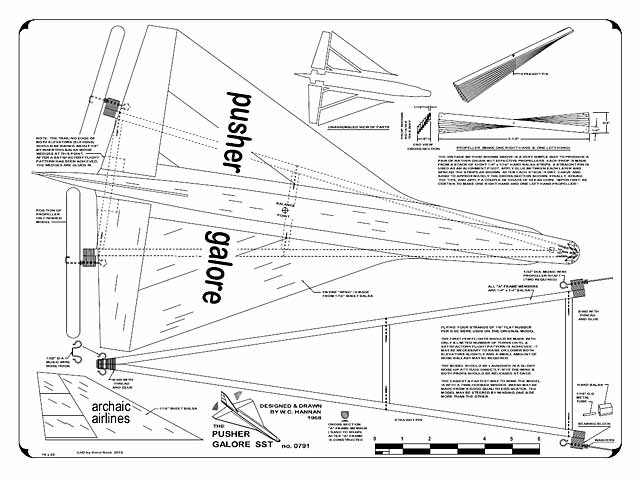 Update 10/03/2016: Replaced this plan with a clean and completely redrawn version, thanks to rchopper56. Note this is a PDFvector format file.

Quote: "Pusher Galore. Build your own SST for long-distance flights. Uses a 1910 A-frame twin-pusher and a double-delta wing. By Bill Hannan.

PUSHER Galore represents an interesting paradox, since the top view is that of an ultra-modern supersonic transport, while the flip-side reveals a chassis reminiscent of 1910! Essentially, we have superimposed a double-delta platform on a vintage twin-pusher A-frame. The result is an exceptionally easy-to-build aircraft that is certain to attract attention wherever it is flown.

Before we settle down to the actual construction, it may be of interest to examine the concept of the double-delta more closely. During the initial planning phases for their proposed SST, Lockheed scientists and engineers investigated a large variety of basic layouts, including arrow-wings, variable-sweep wings, and canards, before choosing the double-delta configuration. This platform was selected as being the simplest design capable of fulfilling the anticipated requirements.

Wind tunnel tests demonstrated that the double-delta could provide very favorable low-speed aerodynamic characteristics even at extremely high angles of attack, without the need for the structural and mechanical complexities that would be imposed by a swing-wing design. A study of the Lockheed engineering reports, led to the creation of our Pusher Galore, which resembles the Lockheed design (at least from the top!) except for the nose, which has been rounded of for safety reasons.

Construction: The basic A-frame structure is made from 1/4 in square medium-hard balsa strip, which has been selected for stiffness and straightness. The forward end of each member is cut at an angle, as shown on the drawing, then glued and bound with strong thread. This, by the way, was standard practice on the old twin-pushers. Next, cut the cross-pieces to size, and pin and glue them in place. Be generous with the glue at all intersections, since they will be subject to strain under full winds of the rubber motors.

The propeller bearing blocks are cut from 1/4 x 3/8 rock-hard strip balsa stock, which is drilled to accept 1/16 diameter metal tubing bearings. The tubing should be roughened on the exterior wall, coated liberally with Ambroid or epoxy, and installed.

Be certain to remove any glue that may find its way into the inside of the tubing. The bearing blocks may then be glued and bound to the outer ends of the A-frame structure. As an alternative scheme, you may cut down the thickness of the A-frame members at the rear, and utilize the plastic bearing assemblies from ready-to-fly ROG models, such as the North Pacific 'Sleek Streek.'

Bend the forward rubber-motor hooks from a piece of 1/32 diameter music wire, and glue and bind in place. Though not strictly necessary, the A-frame members may now be sanded to half-round contour, to streamline, reduce weight, and add to workmanlike appearance.

Wing: The wing is made from fairly light 1/16 sheet balsa, edge-glued to make up the necessary size. Obviously, the desired result can be achieved with other patterns of joints, but the method shown on the plans has proven quite warp-resistant, and can utilize 3 inch wide sheets. Note that the elevons overlap the trailing edge 'tabs' of the wing center-section, and are glued initially only at their leading edges. During flight testing, small balsa shims will be inserted between the elevons and center-section tabs to increase the upward deflection as needed.

Propellers: Don't be afraid to tackle construction of the pair of props for this bird, because we have used a method that is simple enough to be carried out by even a young child! While 'serious' modelers may look at this sort of airscrew with raised eyebrows, the fact remains that these rather crude appearing props really do the job. Each prop is constructed from eight 1/16 thick x 1/4 wide x 5-1/2 in long, hard balsa strips. Each strip is punctured at its exact center with a straight pin, and then all eight strips are stacked in a pile, using the straight pin as an alignment guide. Put a layer of glue between each mating strip, fan them out as shown on the drawing, and set aside to dry, preferably overnight. Caution: Be sure to make one left-hand and one right-hand prop blank, unless you want your SST to do snap-rolls.

After the funny-looking stacks of sticks have dried, they may be carved and sanded to finished shape. After rounding the tips, give each prop two or three coats of clear dope, sanding between coats. Presto! They may be ugly, but they work. Bend a pair of prop hooks from 1/32 diameter music wire, add a couple of thrust washers, and install.

Vertical fin: Cut the vertical fin-rudder from a piece of 1/16 sheet balsa. The shape is not the least bit critical, so if you feel creative, design your own.

Assembly: Glue the wing assembly on the A-frame being careful to center it exactly - with that much gluing area, it would be awfully difficult to shift later. A number of small weights or clamps are useful to hold the wing in place until the glue dries. Next, add the vertical fin, being cautious that it is correctly centered.

Decor: Well gang, the hard work is over, and if you want to, you can head for the flying field. However, why not invest one more half-hour, and add a little esthetic-appeal to your SST? With the aid of a straight edge, a French curve, and a fine-line marking pen, you can really enhance the appearance. You may use our drawings and photos as a guide, or use your own imagination. One effective approach is to apply colored tissue markings, using clear dope as an adhesive. A couple of light spray coats of clear dope will protect your markings from moisture, but go easy, so as not to encourage warps.

Flying: Make up two rubber motors, each consisting of four strands (two loops) of 1/8 flat rubber. With the rubber in place, check the model for balance. Add modeling clay until the balance point is about where shown on the plan. The elevons should be raised by means of balsa shims to about 1/8 in, as measured at the inboard trailing edges. Give each propeller a few hand winds, and try a power glide, releasing the model in a level attitude.

The SST will probably nose up or down rather suddenly the first time. If it noses up, add a small amount of clay to the nose, inside the junction of the A-frame. If it noses down, insert thicker balsa shims to raise the elevons slightly. Once you have established a reasonably flat power-glide pattern, try about 100 turns in each side and try again.

Launching technique: This can best be seen from our photos. The object is to release both props simultaneously, while giving the model a good push. The launch angle is fairly critical. If too steep, the model will stall. If too shallow, the model may fly into the ground under full power, which really makes the splinters fly. Although Pusher Galore is rather stall-resistant, it is by no means stall-proof, as once an extreme nose-up attitude is reached, the elevons are completely blanked-out by the wing, and can't contribute to recovery. Therefore, the idea is to avoid stalling in the first place.

If the model exhibits excessive turning tendencies, don't fiddle with the rudder, but instead, bias one propeller by giving it a few extra turns. Using this system, it is a simple matter to steer the model right, left, or straight ahead. (In the old days, most contests were held for distance rather than duration, and twin-pushers usually won, because they could be made to fly in a straight line.)

Winding: Although the model may be wound one side at a time with a winder or by hand, it is much easier to use a twin-winder. Unless you are lucky enough to have a genuine antique in your attic, you will probably have to make one. This is done by reworking an egg-beater, which can be cheaply obtained at a dime store. Simply remove the beaters, and replace them with hooks, being careful to attach them strongly in order to withstand the pull during winding.

So there you have it, cloudsters. Why not build Pusher Galore and be the first in your neighborhood to fly an SST!" 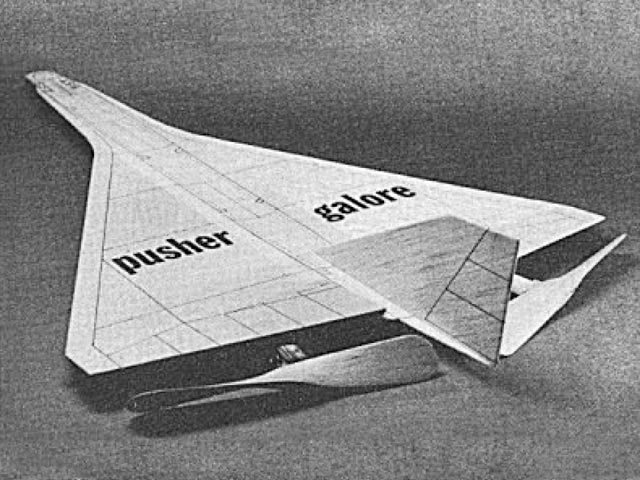