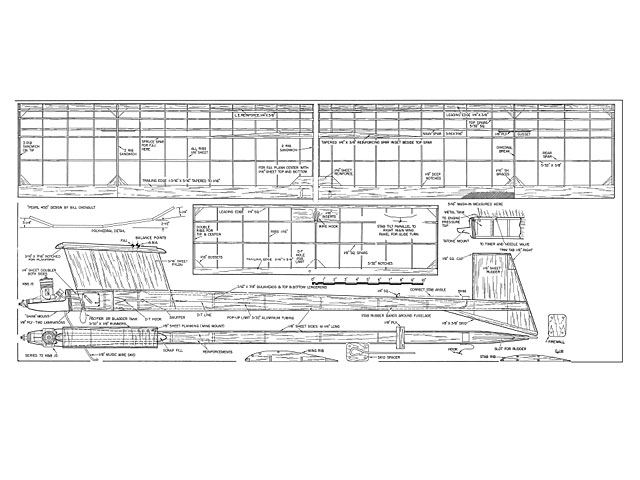 Quote: "Phenomenal describes the climb rate. Maybe simple things weigh less. A .15 to .23 A-B machine or an FAI version can be built. Pearl 450, by Bill Chenault. Text and plans by Bill Mathis.

The Pearl 450 is basically a blown-up version of Bill's well-known Mini Pearl 210, for unlimited class A and B contests using .15 to .23 engines, with a dual capability for FAI power flying. Originally, Bill anticipated only mediocre performance for FAI, owing to the lack of sophistication of the design as compared to the automated high aspect ratio trends currently popular in FAI power circles. But that changed suddenly when he installed a Rossi .15 and weighted the ship up to 28.5 ounces for FAI at the NATS.

The results proved it to be fully competitive with the best, owing to its terrific climb pattern and it wound up in 4th place. Needless to say, the performance in unlimited flying on fuel, with lower weight (anywhere from 19-24 ounces) is also very spectacular.

The strong point of the Pearl 450 is its ease of building and flying. It is as safe as a small, high powered airplane can be, thanks to well-balanced design. It is not a temperamental beast at all if you follow the instructions. Two of the six built so far have virtually flown 'off the board' with almost no trim changes needed.

The design has yet to win big, but only because of mental lapses and freak misfortunes. I overran myself into third place in B at the US Free-Flight Championships at Taft. Bill has picked up a place or so, but lost his first ship with a timer malfunction. He then short-fused in both class A and FAI at the NATS with the unfamiliar new ship. Dave Rounsaville has a .19 ouncer that is just astounding to watch .climb, but it also was too new at the NATS. Vic Cunnyngham has a light one, too. Others are being built now, so the contest record is only a matter of time as everyone gets used to flying the thing.

One advantage of writing about someone else's design is being able to rave about it without appearing immodest (we all know, of course, that has never stopped me when it comes to my own stuff!). Since I started working with Bill on the Pearl series in conjunction with the versions M&P manufactures, I have never ceased to be impressed with its fine qualities. Not only are they easy to fly, but they are genuinely exciting, too. They personify the trend to small, hot climbing airplanes to suit the new rules. Some designs have an undefinable charisma that attracts people to them and the Pearls have loads of that rare kind of appeal. Bill wants to be sure to give credit to the British, who pioneered the small, high pylon, aft fin layout years ago, and influenced this design series heavily.

Wing and Stab: To keep the structures from being glued to the drawing, lay a sheet of wax paper over the plans, or coat the joint areas where glue will be by rubbing with a bar of soap. Both wing and stab trailing edges must be notched to accept the ribs and give a strong joint. Notch the wing 1/8 deep and the stab 3/32 deep, with enough gap for the rib to fit easily without forcing. Stack the ribs together and check the fit of the spars and leading and trailing edges. Sand the top and bottom of the stack with fine paper to remove any im-perfections. Glue up the tip rib and dihedral rib sandwiches in the number shown on the plans.

Pin the leading and trailing edges down on the plans and check the distance be-tween them by inserting ribs in the ends and 'middle. They should fit snugly, but not with force. Move the leading edge in or out to insure this..." 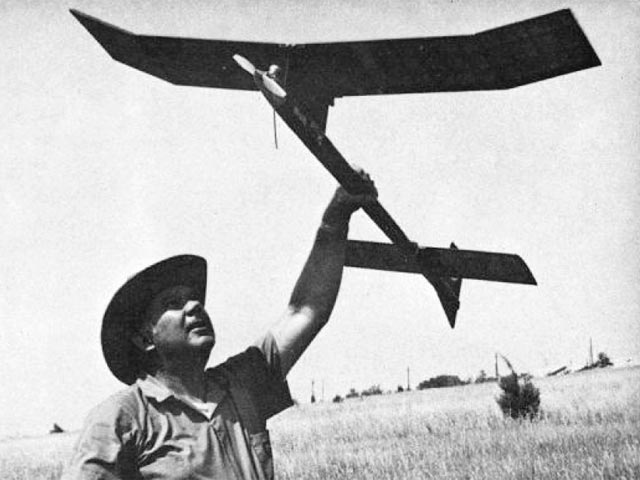