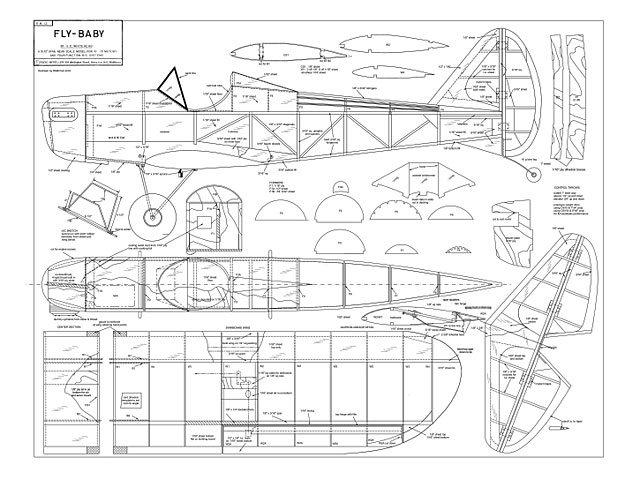 Quote: "LAST YEAR I decided that it would be an excellent idea to knock something together which would be attractive, transportable, cheap and reasonably acrobatic. In fact, something which would fill in the gaps during repairs to first-line models. Whilst perusing some back numbers, seeking inspiration for something scale-like, my eye fell upon JWR Taylor's article about the Bowers Fly Baby in an old Model Aircraft magazine. Principally I am a biplane fan but the vintage-style lines of this ultra-light, which looks like a scaled up 1940's model aircraft, immediately took my fancy.

The aircraft's attractive shape also lends itself to a light-weight structure - and light-weight structures are cheap! I have built small models before, and have always had one problem - accessibility of radio gear. Since this was to be a second-string model, accessibility was paramount, since the equipment would sometimes be in and out like a yo-yo, so a scale of one sixth was chosen to achieve a good fuselage size. The wing was now too big! It should span 56 inches but, at this size, is too long to go across the boot of my car. A second-string model like this has to travel fully assembled. So the span was reduced to just over 50 inches, by omitting one rib bay in each wing panel. By reducing the wing area in this way, the tail percentage was increased - so I kept the tailplane to scale size!

The whole object of the exercise was, then, to produce a scale-like model which would be acrobatic, carry four channel propo and be powered by an OS 15. True scale was not necessary (although fuselage and tail are as accurate as the original 1/72 scale drawing), as it was to be film covered anyway, but a light wing loading was desirable.

The above guidelines have, in fact, combined to produce a most enjoyable model. It will take off from a foot-ball field, and do many simple aerobatics easily. It is stable, yet responsive enough to fly control-line style, performing loops from ground level with ease, and was test-flown in a 15 knot wind, as I couldn't wait until the following weekend, when it rained anyway. Loops, stall turns, rolls, spins, split S's, Immelmans, cuban eights (after an initial dive) are all within its capabilities. The lines are really quite clean, and it builds up speed like a Spitfire when in a dive.

Construction. The structure is very simple and similar to many beginners' models, but a short account is, I think, in order. Evostik Resin-W was used for assembly, and proved to be quite quick to use, when building is done in a reasonably warm atmosphere.

Fuselage: The two sides are assembled one on top of the other over the plan, complete with 3/16 in sheet-ing. When dry and separated, add the 1/32 in ply doublers for the wing-mount. if you use servo clips, the fill-in pieces under the cockpit are 1/16 in sheet. If beam or tray mounting is desired use thicker wood as necessary. Assemble the front part of the fuselage, ensuring squareness, back to F5, including the top 1/16 in decking. When dry, draw the sternposts together, glue and add the rest of the cross-braces, formers, stringers and rear fairing blocks. Then glue the engine mount in place, ensuring 4° right thrust by supporting with the top and bottom blocks. The side and front blocks are added and shaped, the headrest fairing fabricated from 1/32 in sheet and bingo! -- the fuselage is ready for covering.

Wings: Some care is needed in ensuring that the wing panels are warp-free. Pin down the trailing edge sheeting and add the 1 xin. trailing edge section. Then add the lower rear spar, ribs, (except W3 and W4), upper rear spar, both front spars and the leading edge, keeping the ribs supported as shown on the plan. Note the doublers on the rear spars. When dry, remove from the plan, add W3, W4 and tips, ensuring symmetry and cracking spars as necessary. Add the leading edge sheeting. Cut out the ailerons, face them and the rear spars with 1/16 in sheet and hinge by the covering film method. The centre-section is constructed without the dihedral braces, then the ribs slotted as necessary and he braces glued in place..."

Quote: "Hi Steve, I rescued this Fly Baby plan by G Whitehead from the RAF Abingdon Model Aircraft Club when the station closed in 1992. The plan has been well used and is badly faded, as a result I was unable to scan it, so I have redrawn it in CAD form. All formers etc. should be accurate but it is always worth checking before cutting."

Article pages, text and pics thanks to RFJ. 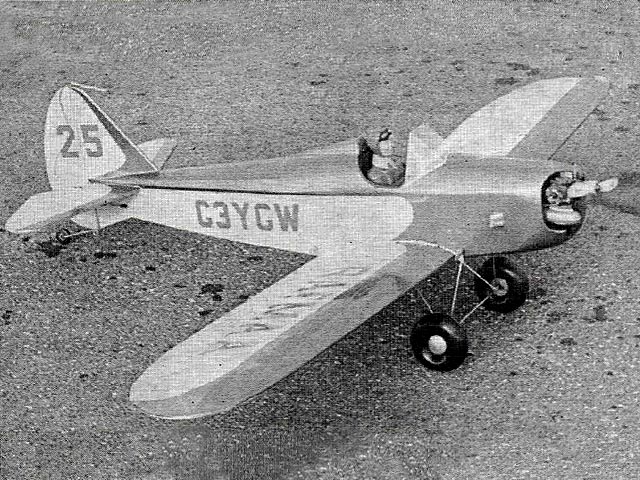 Hi Mary and Steve. This is the very first scale plane design by Mr Gordon Whitehead published in 1974. The first of many fine Radio Control Scale Aircraft Models for everyday Flying to come...Good Job RMB...Cheers
Pascal - 02/03/2016
Add a comment