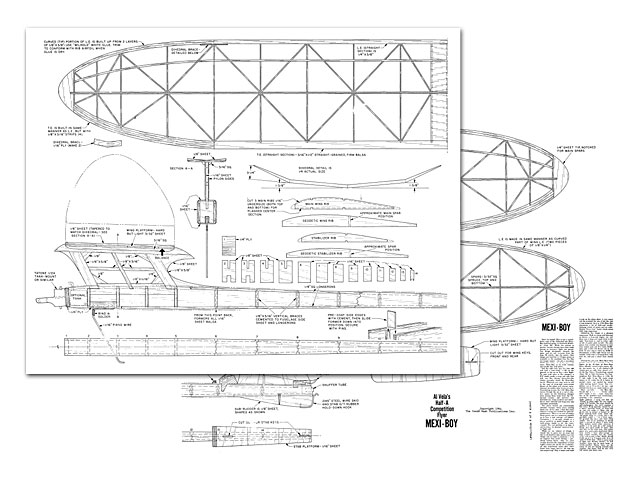 Don't be fooled! This is not a scaled-down copy of the Unlimited size Mexi-Boy featured earlier in American Modeler (Aug '62) . While the outline is similar, various changes have been made during an extensive flight test period. Our design philosophy remains the same, and we will re-quote from the Aug '62 article - 'get the power, then design and build for it.' Proper power is available in the excellent Cox Tee Dee rev-happy engines (we get a consistent 20,000 rpm 'song' all of the time with ours). Mexi-Boy, in its 1/2A version, can handle this wild power.

Fed the right fuel, any Tee Dee .049 will tach a rock-steady 20,000 on the ground, in the air or flight after flight. To cope with rpms in this category, a F/F model needs a wing and stab that will not flex during skyrocket-like climbs, precisely where the Mexi-Boy excels. Whatever you may wish to call it, the type of wing-stab construction shown on the plans will remain warp-resistant no matter what forces act on it. Considering its size, the 1/2A Mexi-Boy moves through the air at a higher rela-tive speed, so the following changes were among those made from the Unlimited version: tail moment was stretched out, wing incidence and down-thrust were reduced and wing area was increased generously.

The above factors are intentionally stressed because while mere scaling down may do for some, I find that many distinct changes are needed for optimum performance. There is no way of scaling down power, nor is a prediction possible as to how a new concept will behave. Consistent with strength, weight is a minor problem in small designs, so a wild-acting model is all too easily created. The real problem is to tame it and to obtain the desired 'aerial groove' or flight path.

While on the subject of design, I would like to point out an important fact to all doodlers who modify a proven design and re-name it, claiming it to be an original. You aren't fooling experienced contest flyers - they can quite readily describe the originations of your highly-touted job. As for the uninformed and unknowing types - they won't know from beans anyway. So who are you impressing? Play it smart and build it just as the plans show; it will really cut the mustard for you if left the way it was designed. As it is, 1/2A Mexi-Boy represents a lot of both-end candle-burning, plenty of sweat, and an undefinable 'know-how' factor which comes with long experience.

Adjusting this design is a pleasant experience. With no warps and balanced as shown, a 5-second engine run will show you a steep and rapid climb to the right. Transition is good to either right or left (I prefer glide to left). The only power trim needed will depend on how your engine puts out. If it tachs 20,000 rpm, just a little left thrust will do the trick. If your engine turns up 18,000 or thereabouts, a little right thrust will be needed. Glide trim is accomplished with stab tilt, and just a small shim should do.

During the past year, Mexi-Boys have proven capable of consistent 5-minute flights. At the '63 Nats, all Mexi-Boys flown officially netted triple maxes. After two maxes, my B job clocked 4:50 (kinds gets ya right here, doesn't it?). At the San Valeer Thunderbugs annual (Sept '63) at Taft, California, Vic Cunnyngham flew Mexi-Boys in 1/2A, B, C, and night flying. He made triple maxes in all events but B. A faulty 8-second engine run spoiled his record (after having maxed twice). You very seldom see a Mexi-Boy at our local contests that does not make triple maxes.

Built carefully, a 1/2A Mexi-Boy should last a long time. Unlike other older types, it will remain warp-free due to the geodetic-type construction, resulting in very consistent..." 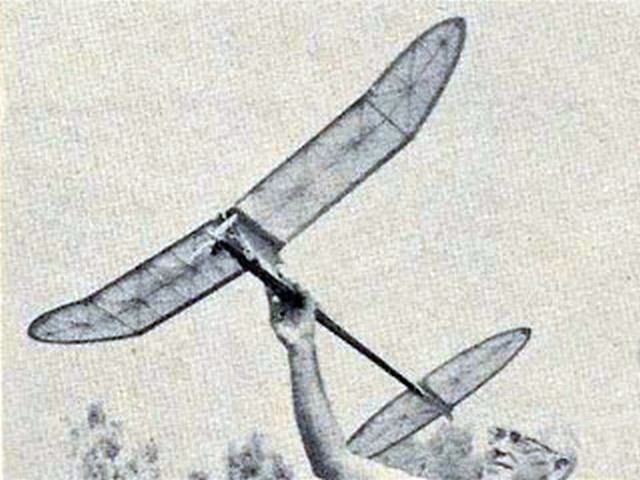