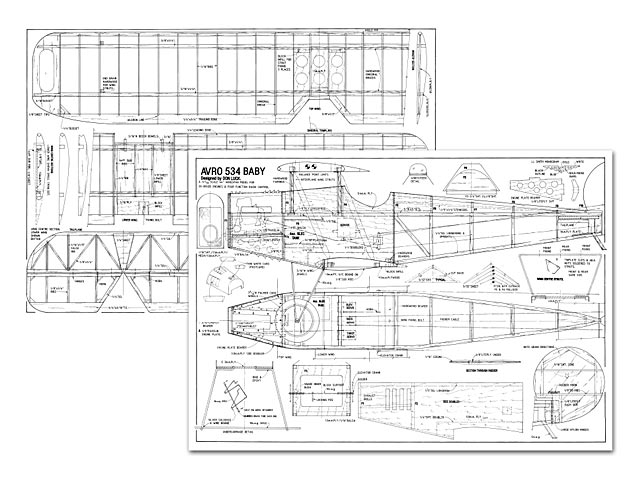 Roy Chadwick might have had the modeller In mind when he designed the full-size Avro runabout. Ideal for an upright model engine - Don Luck made the best use of the quiet running of an unsilenced O.S. 20 four-stroke - simple but pleasant lines and a colour scheme that reverses the Henry Ford dictum, what more could you wish for?

Don Luck starts his article: If you have built a conventional WWI biplane, or similar, go straight to 'Flying' and 'Notes'. In other words, the construction is traditional and shouldn't hold any surprises to the reasonably experienced scale modeller. For those of you who prefer a few comments, here are Don's building notes.

Add left and right fuselage sides, rear longerons, all cross pieces and side pieces - fit ply formers UC1 and UC2. When completely dry. remove from building board and complete fuselage top with rear formers, stringers and 0.4mm ply cockpit coaming. (Fit only the F1 ply component at this stage.)

Top wing: 1/8 in Lite ply centre, on 1.5mm ply, (with lightening holes) pinned down as a guide for spars - do not glue to ribs yet and do not pre-drill wing bolt holes yet.

Position wing in place, measuring and centring before drilling the three 6BA clearance wing bolt holes. Drill 1/16 in dia into wing strut blocks and glue in 1/16 in split pins (underneath!) - see note on struts on alternative methods of fixing.

Wing struts. Set up and fit wings, check both are warp free and cut hard balsa struts to length and glue in 1/16 in split pins, either fore and aft, with one piece wire fixing, or tap 10BA one of a pair of split pins and bolt on.

Tailplane/rudder: Normal construction - cover before fitting horns and installation. Note grain direction to avoid possible warping - as the 'all flying' rudder hinge area is limited use heavy duty hinges ('Beckey' large scale nylon with No12 ally knitting needle as hinge used on prototype) or use large 'Kavan' type. Remove hinge pins - interleave hinges and use one piece 20swg wire hinge pin and push up into fin.

Covering: As preferred, but keep as light as possible e.g. white 'Fibafilm' is very good but colour is not 'solid' - prototype is a compromise by Fibafilm on undersurfaces and Solarfilm on top surfaces. Lettering with Solartrim. Nose and cowlings, tissue, dope and painted back to windscreen.

Flying: Take off is typical of a narrow track early biplane with non-steerable tail skid - direct into wind and steady increase in engine revs, holding in up and not over-controlling the swing - lift off occurs when elevator is levelled - throttled back to just under half power. The flight pattern is quite predictable, rudder is powerful and rates should be adjusted to 1 in each way - (full rate is required for low speed landing and ground handling) elevator is also sensitive and 1/2in each way is adequate although at tickover landing speed full up trim (or switching out rates) is required to flare and three-point without 'arriving'.

Notes: The target weight of 3 lbs or less, giving up to 11 oz/ sq ft wing loading, is easily achieved despite generous wood sizes and scale number of ribs (56!) no extra nose weight was necessary with the O.S. 2OFS engine to balance within calculated CG, rudder and elevator are closed loop control as per full size. A pilot is a prerequisite, he fills the cockpit and lends scale realism - cockpit instrumentation is black scratch board with dials scored in. The engine exhaust was extended to exit on the 'scale' side and three more dummy aluminium stubs were bolted to the removable cowl - a remote glow socket is also installed to simplify start-up and choke/needle valve and fuel fill are accessible outside - (the cowl is rather small and fiddly to fit with the engine running!) working vents/louvres (bent card) ensure adequate cooling.

Scale outline is accurate according to documentation and photos from Queensland Museum where this Bert Hinkler record breaker is displayed. (The 1977 Aeroplane three view was wrong! which George Cull subsequently confirmed when he visited Oz). .." 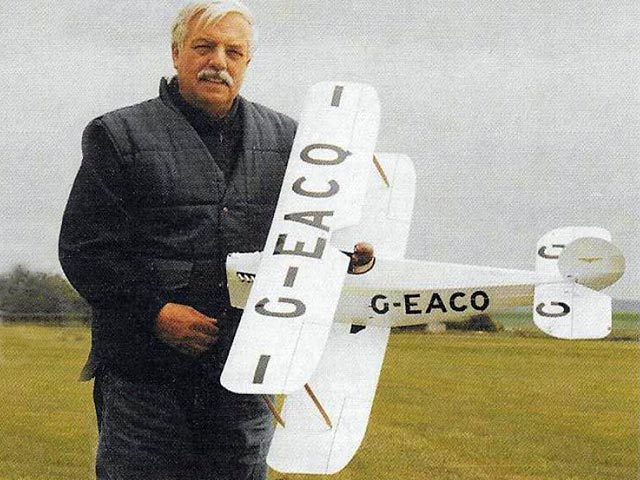