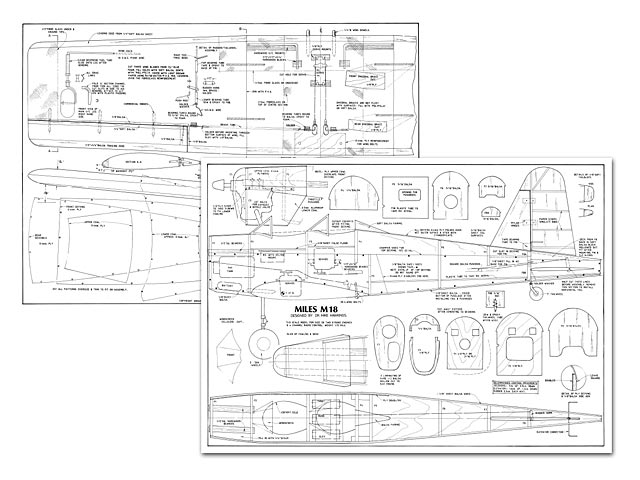 Quote: "THE MILES M 18, unofficially known as the Magister II, is one of the very few aircraft that appears to have been designed with the intention of making things easy for the scale modeller.

10 years ago I made a 1/6th scale (2 in to 1 ft) model of the thick winged, tricycle undercarriage version. It was the most difficult model to fly that I have ever made, underpowered with an OS 60 FS, tail heavy and with almost no aileron response at all, it would not turn on rudder! 4 years ago, I tried it again at 1/8 scale for the OS 20 FS. This one came out a bit heavy at 2.1kg, largely due to some American polyurethane paint that took 5 coats to cover. It flew well, but tended to flick when pulling 'g'. For a tail dragger, it did beautiful landings on the rough Saudi sand.

I have now made another of these, and at 1.72kg, it does not flick out of manoeuvres and has a surprisingly gentle stall.

The Aircraft. Four prototypes were built, the first having the rudder aft of the horizontal tail. Later this was moved forward, presumably to improve spin recovery, making an aircraft that must have been much quicker to build than either the Tiger Moth or the M 14 Magister. However, production contracts were cancelled, twice. Three survived the war and one, registered G-AHKY, won the King's Cup in 1961. It was last heard of in the Scottish Aviation Collection Trust, Perth.

The Model. Because of its simple shape, advantage has been taken of some slightly non-standard materials, which should also help to reduce the cost.

Wing. Three blue foam blocks are cut from 1-1/2 in sheet. These are carefully marked for the position of the balsa leading and trailing edges. If done accurately, you are guaranteed a true wing with correct washout. These dimensions are given as decimals of an inch on the wing sections.

The outer blocks need to be chamfered to their inner edges for the dihedral. PVA glue is adequate for joining the blocks, and much cheaper than epoxy. Make up a paste with PVA and foam sandings to fill any gaps. Note that the dihedral braces are not flush with the wing surfaces as it is much easier to fill the slots with Polyfilla than sand hard ply against soft foam. Put the assembled wing block aside for several days for the PVA to dry out before carving to section using a serrated-edge kitchen knife and a 'Surform' rasp. Finish with emery paper on a sanding block (if in a hurry, you CAN use epoxy, and damn the expense!).

Cut the ailerons away and add balsa facings. Standard strip aileron horns can be used, cut in half, bearing tubes added at each end, and a length of brass tube soldered in the middle. Cut a channel in the bottom of the wing, bind the bearing to some scrap balsa and epoxy in place. Fill the channel with soft 1/bin balsa.

The same process is used for the undercarriage blocks. which can be stuck into the foam with PVA glue. If you have it available, 1/2 oz fibreglass fabric can be used for reinforcing the undersides of the tips, the undercarriage area, and the top of the centre section, but you must use epoxy resin as polyester eats foam.

The wing is covered with light weight brown paper, put on wet, with 50/50 water and PVA and a tin paint brush. When dry, give another coat and it is ready to paint.

Fuselage. This is a simple box with flat sides of 1/8in balsa, from F1 to the tail. 0.4mm ply doublers are used back as far as the wing trailing edge.

Having built this box, I suggest installing the servos and the rudder/tailwheel bearing assembly. Then install the horizontal tail by cutting away the lower fuselage sides and re-cementing when the tail is in place. Hook the push rods into the horns and retain with soldered washers.

You can now cover the top of the fuselage with two pieces of 0.4mm ply. Cut slightly oversize and trim down to fit. Use cyanoacrylate to stick the ply to the tops of the formers along the centre line. Then wet the ply and bend it over in the middle, tacking it down eat each side with cyano, working along, bit by bit to each end. There is only slight double curvature, due to the curve of the fuselage sides in plan view, but if you end up with a wrinkle, you can slit it and stick down with cyano. With some filler and careful sanding no one will know!

Make cut-outs for the cockpits and fin and add the soft balsa fairings at the tail. Finally, cover the bottom of the fuselage. The top cowl is a similar exercise. I filled in the top of the bearers with scrap sheet to stop fuel getting into areas that I could not fuel proof.

A remote glow-plug connection is needed and the throttle connection was simply a piece of bent wire going through the hole in the arm. it does not fall out.

Three screws on each side hold the lower cowl in place. Make sure there is plenty of room for cooling air to escape at the sides and bottom of the cowl. Photos show that the top decking was not faired into the fuselage sides, but simply tacked down, 'clinker built' style..." 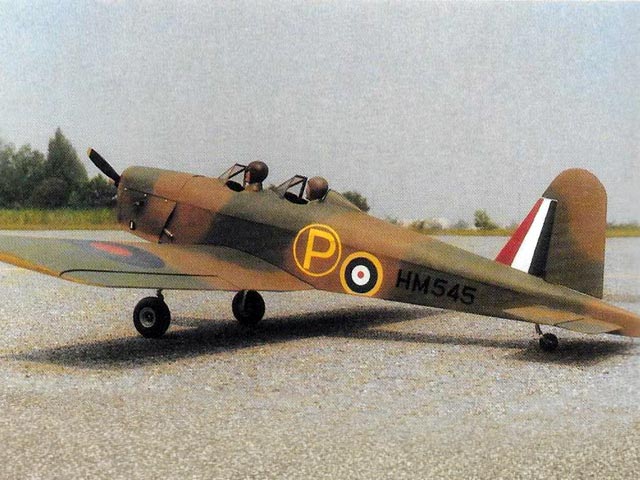