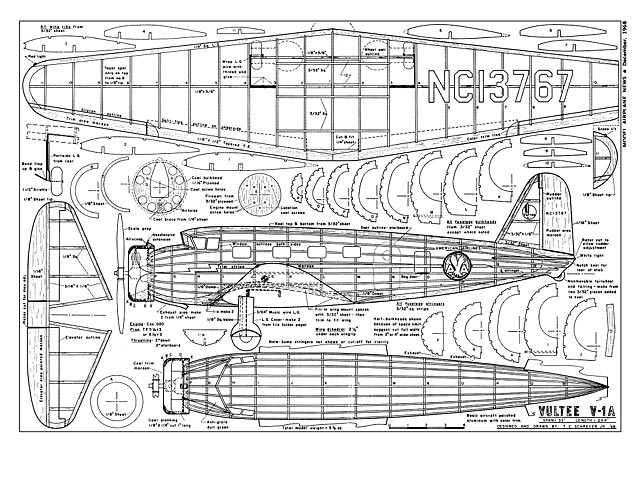 Quote: "Simple, lightweight engine powered free flight for the modeler who gets his kicks just from flying! any old place under any old conditions, you can't beat it! Vultee V-1A, by Ted Schreyer.

One of the most advanced and beautiful aircraft to emerge during the early 1930s was the Vultee V-1A, a single-engined transport plane of all-metal construction, featuring a sound-proofed cabin for 8 passengers, fully retracting land-ing gear, powered by a Wright Cyclone 735 hp engine, cruising speed of 205 mph, and spit flaps that allowed a landing speed of only 63 mph. The Vultee V-1A had a span of 50 feet, length of 37 feet, and gross weight of 8,500 lbs.

January 15, 1935 Major James H Doolittle flew a Vultee V-1A from California to New York City in 11 hours 59 minutes breaking all existing records for transport planes. Sept. 2, 1936, a modified Vultee V-1A named 'Lady Peace' took off from New York and headed east over the Atlantic, but radio and navigation trouble landed them 175 miles from London, and then in Newfoundland on their return trip. But the aircraft had proved its performance and ability.

In 1935 American Airlines and Bowen Airlines were both using the Vultee transport, and factory production was up to 50 planes a year. However, this success was short-lived because of the ban imposed on single-engined commercial transport planes for safety reasons, not to mention the competition from the twin-engined Douglas DC-2. Vultee tried to recoup by redesigning the V-1A into an attack bomber, but although its performance bettered existing Air Corps planes of the time, only a limited number were sold. Despite its lack of commercial success, the Vultee V-1A had made its place in aviation history and the at-tractive plane with its well-proportioned aerodynamic design makes for a fine model.

This model is the result of a desire to produce a sport flying scale model of one of the famous aircraft of the 1930's, and the author's ambition to make a low-wing free flight which led to the selection of the Vultee design. Happily, the V-1A not only turned out to be capable of flying well for a scale model, but has proved to be rugged enough to take lots of Sunday flying. The plan may seem complicated at first glance, but actually construction is basic and not difficult.

A secondary factor in the design, but of importance in the success of this model was the light weight achieved by simple structural design, elimination of detail, and silkspan covering instead of balsa sheet. What goes up must come down, and the author feels that although a heavy wing loading may not adversly affect the powered flight, it is the glide and resulting landing, or a better word is 'impact', that proves the value of a light wing loading with its flatter, relatively slower glide and the ability of the model to 'bounce' rather than dig in or shear off the extremities. In the course of extensive flying, the model (which weighs 51/2 ounces) has flown into such Vermont landmarks as maple trees, stumps, brush piles, and a barbed wire fence and come away without serious damage. Also, the light wing loading permits the use of minimum power, in this case the Cox .020.

The model was scaled up (2/3 inch = 1 foot) from a rather small size plan in 'Flying for 1936' and therefore is not considered exact scale, although the only conscious departure from scale was the addition of about 10% to the rudder area.

Construction: Balsa should be selected to give strength with lightness, all glued joints should be given a second coat.

Fuselage: Basic keel and bulkhead construction with longitudinal stringers. Cut out bulkheads in full round width even though plan shows half-bulkheads. Wood grain in bulkheads should run vertically. Take care to cut the stringer and keel notches the right size for a snug fit. Cut the keel out, splicing top and bottom near the tailwheel, mark the locations of the bulkheads, cut out a slot for the rear of the stabilizer, and glue bulkhead 'F' in position..." 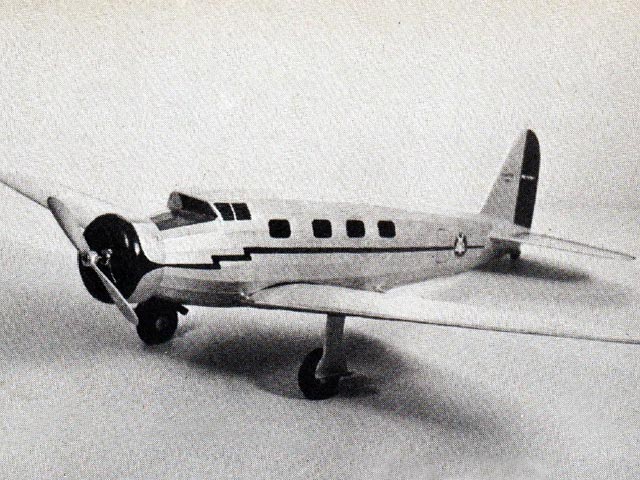