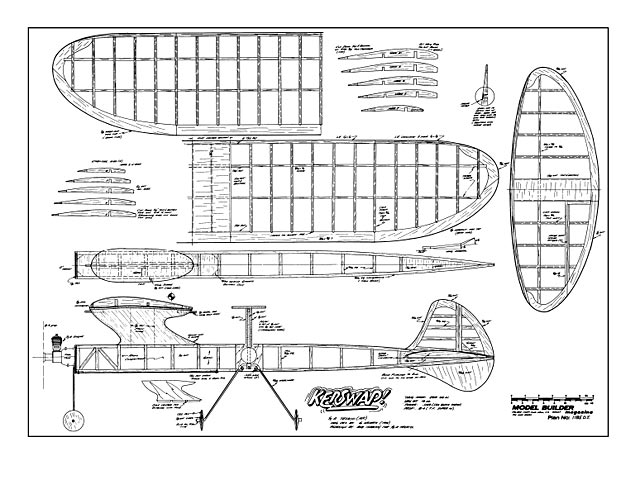 Quote: "Here's a 1/2A Texaco Old Timer with an impressive contest record and straightforward construction. An ideal combination for newcomers to the Old Timer scene.

The KERSWAP was designed by Gil Morris, who built three of them in 1941-1942. Originally powered by an Ohlsson .19, the 288 square-inch airplane must have been a 'bomb'. In 1982, the NFFS Digest reported that a Kerswap was being flown (freeflight) in the California area powered by a rare Ohlsson 33; that one had to be even more spectacular. Rumor has it that the Kerswap was named for the sound it made when augering in; as Gil is still around, and an active freeflight competitor, I plan to check out the rumor.

The Kerswap is a straightforward, simple airplane. In its original size, it is almost ideal for conversion to 1/2A R/C Texaco. To keep the airplane weight down, I changed some of the wood sizes from the original; but the Kerswap, as presented in this article, conforms to the original in planform and size. The Kerswap has minimal frontal area and a surprisingly thin undercambered airfoil when compared to other Old Timer airplanes. Both of these factors contribute to its ability to penetrate into the wind. Because the wind blows all of the time in Texas, it is important to build airplanes that can cope with that problem.

The airframe is about as simple as you can get (allowing for the elliptical flying surfaces). Although I am a notoriously slow builder, the airplane constructed for this article was built in two weeks of part time (evenings) effort. At about this time in most construction articles, the author states that "I am not going to bore you with the details of how to glue A to B". If you have read this far, you are in for a surprise! I fully intend to describe the construction process, as this airplane may be attempted by a first time builder.

The fuselage is constructed almost entirely of 3/16-square balsa strips. Try to pick out four fairly firm pieces for the main longerons, the remainder can be built from medium light stock. I normally jig-build my fuselages to keep them straight; this is accomplished on the Ker-swap in the same manner that wooden ribs are constructed for full-size aircraft. Using a flat, wooden building board, tape the plans to the board, cover with waxed paper, and proceed as follows..." 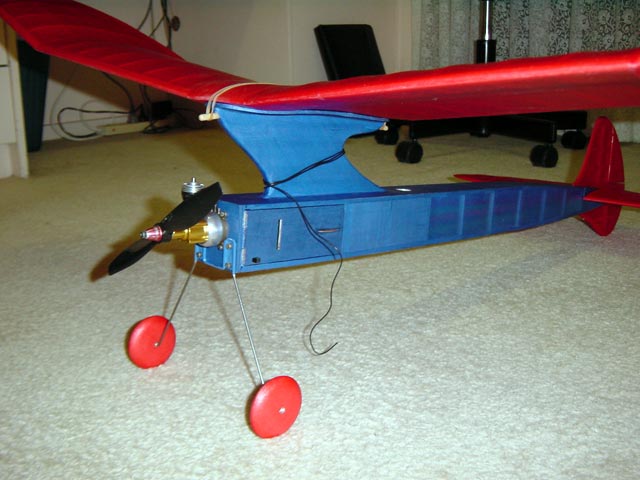 Attached are pics of my 1/2A Kerswap, my first radio model [main pic, 003-007]. As a Free Flighter I do not like wires and control lines adding drag to my aeroplanes, so I designed a way of making all the lines internal BUT also making the model so that it could be dismantled just like a Free Flight model for easy transport. Model is covered in Thai silk and has a Cox Texaco Junior as the power plant, modified from a Cox Texaco by machining the tank down from 8cc to 5cc. Bit of epoxy carbon in the wing spar and elsewhere as I'm crap at flying R/C models. Best regards,
Jon Fletcher - 07/01/2021
Add a comment