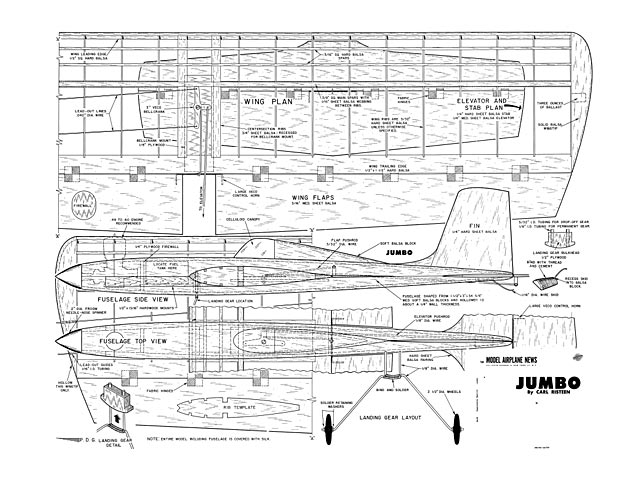 To plunge into first things first, Jumbo was designed for high speed, smooth operation and high maneuverability unhampered by overheating. and sensitivity that might mar a graceful stunt pattern.

In planning the first model, I decided to try a low wingloading, high power and good streamlining for minimum parasitic drag. Efficient controls would also be needed to avoid unnecessary drag and turbulence in tight maneuvers at high speed. I decided to experiment with larger-than-average wing flaps and elevators on the theory that, operating through lesser angles to the slipstream, they would be more efficient.

The first model was built with an extremely low weight, achieved through the use of very light wood and a skimpy finish. A thin airfoil was used along with a fairly short tail moment arm. In flight, the model combined great speed with an incredibly small turning radius. It would not, however, maintain good line tension throughout difficult maneuvers on long lines and was too fast on short lines.

The next model included greater thrust offset, more wing counterweight, stronger wood and a better finish, A thicker airfoil was also used to provide better lift for tight turns. Consequently, this model flew much more smoothly and performed the stunt pattern with ease on 100 ft lines. I found it possible to perform unusual stunts with this aircraft which are impossible to a normal stunt model because of higher weight and powerloading. Vertical take-offs were performed with great ease and precision, as well as drop-out launches with the model held horizontally only a few inches off the ground and released from a stand-still. Apparently, the large flaps working with the prop-wash provided enough lift to prevent the model from falling before it gained speed.

Several additional models were built to experiment with various wing areas, control surface areas, wing sections and tail moment arms. I found that the stability of the design seems to depend very little on the CG, with the airplane becoming more maneuverable and sensitive the farther the CG moves to the rear. I would recommend, however, that the builder experiment with nose and tail ballast until he finds the CG location he likes best for good all-around performance.

The culmination of all the experimentation is represented in the Jumbo version shown here. The original model is entirely covered with colored silk with bright yellow wing and tail center sections and bright red tips. The fuselage is covered with two layers of silk and is doped red. A clear finish coats the wings and tail for weight reduction but appearance would be improved and performance should not suffer much if a full color finish were applied to the entire model. The model may be powered by any .49 to .65 engine. A hot .35 would probably give sufficient power if weight is kept low with a light-weight finish.

If a racing .60 is used it will probably be necessary to use a restrictor in the intake to boost fuel suction. A regular needle valve assembly must also be used inplace of the racing type. A pair for Walker pressure tanks are the best bet for a racing engine like the McCoy .60, as even running is assured and no restrictor is needed. If a regular wedge tank is used, it must be mounted with its center line exactly level with the spraybar, otherwise tight maneuvers will be accompanied by very poor running.

Start construction with the fuselage. This is carved in two shells, top and bottom, from two medium soft pieces of balsa measuring 1-1/2 x 3 x 36 in. On each piece, first trace the outline of the top view of fuselage. After sawing these out, trace the side outline of the upper and lower shell on each shell and saw to shape. Next, round off each shell and hollow out. A large, half-round X-Acto gouge is satisfactory for this. Leave about 1/4 in wall thickness.

The wing construction is quite conventional. The tips are carved from soft balsa and the inboard tip is hollowed out. Place a 3 oz weight in the outboard wing tip. The bellcrank floor is mounted in slots in the two thick root ribs. Install the bell-crank and lead-ins, and make wing flaps and tail assembly. The flaps and tail assembly should be covered with silk for greater strength. Cut a piece of soft 1/2 in plywood to make the bulkhead that fits the lower pan for the landing gear mount, as shown on plans..." 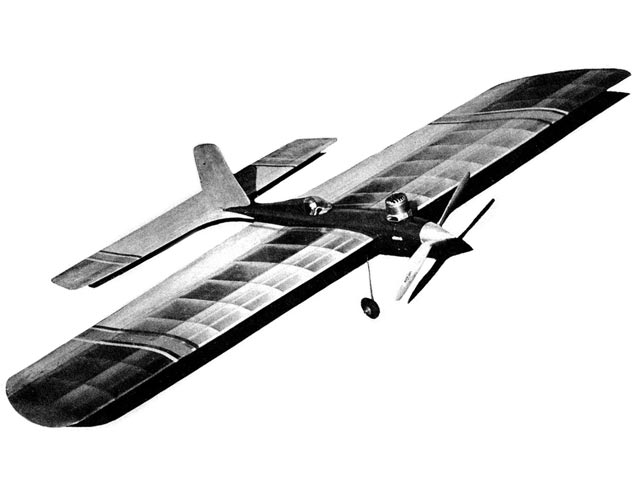