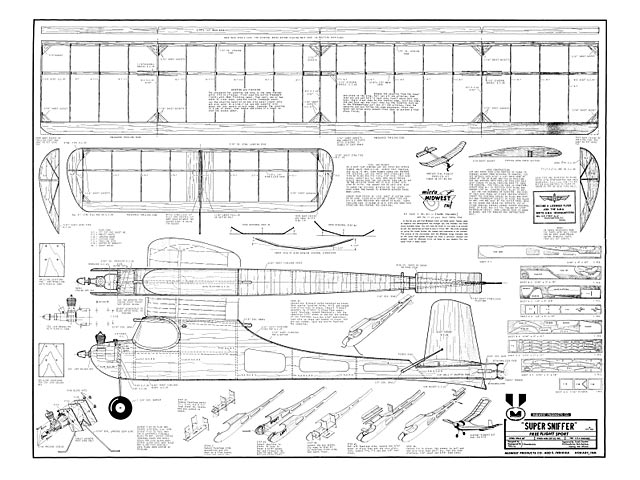 This is an enlarged version of the Midwest Sniffer design. Note there is some confusion over the correct wingspan of this model, which is either 45in or 48in depending on whether you measure the plan or just read the title. Curious.

Quote: "Midwest's Super Sniffer Sportster. An ideal ship to learn the secrets of free flight, how to trim and adjust, etc. A larger version of the Sniffer, a 16 year old design. Review by Paul Kugler.

My first really exciting experience as a modeler was watching a free flight model that I had built gliding overhead. The fact that the plane would really fly gave me a tremendous feeling of accomplishment. Although this first experience happened many years ago, the same feeling returns whenever I fly a free flight model.

The Midwest Products Co of Hobart, Indiana has produced the Super Sniffer, a free flight sport model which should meet the needs of both the novice in powered free flight, and also the more experienced weekend flier. A sport type free flight plane is more suitable for a beginner than is a competition type model. Sport types are more forgiving of improper adjustments, and are usually built stronger to absorb the punishment that the novice flier is sure to provide.

An economical, easy starting .049 engine is used to power the Super Sniffer. This level of power is an advantage for those new to free flight modeling. The 1/2A engine provides a safe, sensible speed to the large 48 inch wingspan model. The large wing, 307 square inches, will aid in keeping the plane in sight in the air, and make it easy to retrieve after each flight. Another feature that most modelers will like about this ship is the strength built into the fuselage. More advanced modelers can easily fit a rudder only radio control unit into the large cabin area.

As with most Midwest kits the model builder will find that the die cutting is excellent. All the parts are large and fit easily together. Working carefully during evenings you will be able to build the Super Sniffer in less than a week.

Construction: The most important step after opening the box that the model comes in is carefully reading the plans. The second step is to take each of the die cut sheets and compare it with the illustrations shown on the plans. Each part should then be marked with a ball point or fine point felt tipped pen. Following this step will eliminate the only possible place for error in building the plane. I found it helpful to not remove parts from the die cut sheets until they are actually needed. This procedure will save you time, and eliminate any possible error in identifying parts.

Start by building the fuselage first. Actual construction is easy. An internal frame is first built for the cabin area of the fuselage. Then the sheet balsa fuselage sides are glued to this internal frame. Add the sheeting to the top and bottom of the fuselage, and you are ready to install the motor and the landing gear. These parts are attached to a plywood motor mount, and then the entire assembly is fitted and glued into place. Give high marks to this kit for including the necessary motor mounting hardware. The blind nuts should assure that the motor does not vibrate loose after several flights.

Next build the rudder. This is a simple step of gluing two balsa sheet parts together, and sanding to shape. The reason that the rudder is built at this point is that it is used in making the stabilizer. The only critical part in stabilizer construction is to make sure that the rudder will fit between the two center stabilizer ribs and form a perfect right angle to the stabilizer. As shown on the photos illustrating this article, a right angle rule is helpful in making certain that the ribs are straight. The rudder provides proper spacing between the center ribs.

Now you are ready for the wing. Building the stabilizer will have given you the practice necessary for building a warp free wing. Build one wing panel at a time. Once all four panels are completed block up a panel to provide the necessary dihedral and glue the parts together. Wait until the glue hardens and then join the next panel. There is only one step which may cause a problem. The wing ribs at the point where the wing panels are joined together are not glued into place until after the proper dihedral has been set into the wing.

Finishing the Model: To get the best finish follow these steps. First sand the entire model using fine sandpaper. After sanding give the entire structure one coat of clear dope. Sand again after the dope has dried. Cover the entire model using the silkspan provided in the kit. I found that the dry method of covering produced the best results on the Super Sniffer. After the entire plane is covered, wet the silkspan to shrink it tight. Once the silkspan has dried and stretched tight apply one coat of clear dope to the entire model. Sand lightly and apply one or two coats of colored dope. Do not apply too much colored dope because dope adds weight. The idea in free flight is to keep the plane as light as possible. Complete assembly of the model and you are ready to go flying.

Flying Free Flight: You must balance your model if you expect good flights. Mine needed a slight amount of lead added to the nose. After the plane is balanced, the next step is to trim its glide. Look to see if you have built any warps into the wing or stabilizer. If you have, remove the warps by steaming the area over a pot of boiling water, and apply pressure to remove the warp while the area cools.

To trim the glide aim the model at a point 20 to 25 feet away on the ground. Push the plane towards this point with a firm motion. If the model dives insert a thin piece of cardboard (football or baseball cards work fine) under the front of the wing. On the other hand, if the model stalls add the cardboard under the rear of the wing between the wing and the fuselage. Adjustments on the Super Sniffer are more easily made on the wing rather than the stabilizer because the tail assembly is used as a dethermalizer. Make adjustments until the plane glides well, and do not attempt powered flight until the glide is satisfactory.

Once the glide is level you will need to trim for powered flight. Place the propeller on backwards for the first several flights. This will reduce the power by about 25 percent, and will let you see how the ship is behaving under power. The plane should climb at a gentle angle when the prop is on backward.

For full power runs be sure to limit fuel or the engine run. A Tatone tick off timer works great if you can find one. I could not find one in the entire Washington, D.C. area, but you may be luckier than me.

One word of caution. Install a dethermalizer as shown on the plans. Do not forget to light the dethermalizer before launching. The Super Sniffer glides really well, and you may never see it again if the dethermalizer doesn't work. Just in case be sure to put your name and address, and phone number on the model too." 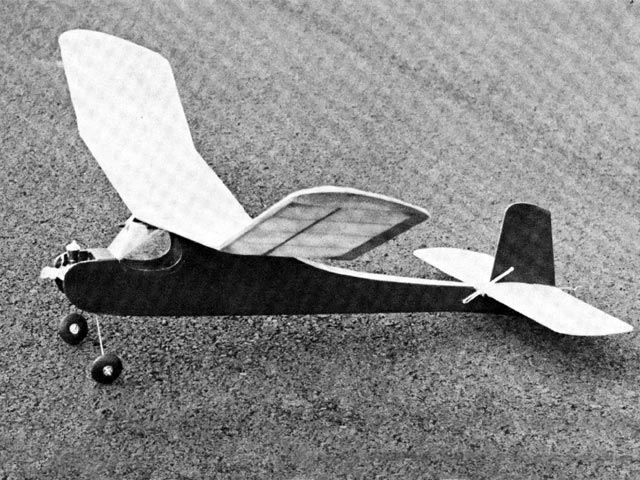