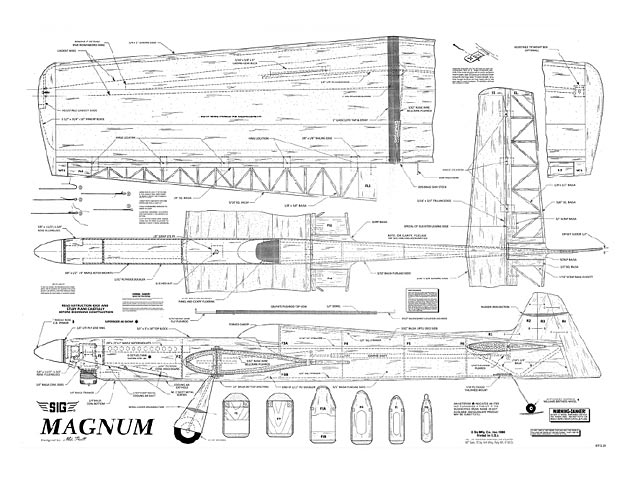 Quote: "Steve/Mary, Here is the plan for the Sig Magnum. I rebuilt, deskewed and restored parts of it. It is not the Magnum Plus plan that Randy Smith and Tom Dixon collaborated on. This is the Sig kit plan. It has 60in span, 700 Sq. inch wing. Flying wt should be 47-50 oz. Powered by .40-.60 engine. I am also including the Sig build booklet which I downloaded from their website, If anyone has kit decals for it, it would be nice if they scanned them and uploaded them. Sig just sold it's last one. Seems I was a day late and a dollar short."

This review started about two years ago while I was attending Sig Manufacturing's control line contest at Montezuma, Iowa. It's a great contest and all who attend and fly come away with a prize. Held early in the year, the contest gives flyers a chance to preview all the competition for the coming season. Much eyeballing goes on to see if someone has come up with that little tidbit of engineering that will give them the edge. Of course I divide the contest flyers into three categories percentage: 50% (he must be a good flyer), 30% (Show and Flash - you know, white tennis shoes and pants along with a Banlon golf shirt to match the color of his brainchild), and 20% (that new design and paint job along with the little mind games). That's where you try to 'psyche' out your opponents and if that doesn't work, you hope the judges remember the Pepsi you got for them last year on that gruesomely hot day.

Anyway, Mike Pratt had his new pride and joy there, his new Magnum. We all gathered like a covey of quail to see this beauty and watch it fly. Of course, we all wished we could get ahold of it and try it out. After I had a couple of flights on my Bansheeks, Mike felt I was capable enough to fly his new ship and asked if I would like to. After a couple of, Well I don't knows, and two I'm not sures, I grabbed the handle and walked very briskly to the center of the circle before he could change his mind. The ship left the grass like it was black top and grooved very well. It felt so good, I started to fly the pattern. While flying this bird I found myself saying: Hey this thing is a good one, it does what I tell it, when I tell it. Upon landing I congratulated Mike on his new ship and asked for a set of the plans. He informed me that Sig was planning to kit this design. This was good news. Not only were they going to kit a good model but it would give controline a much needed shot in the arm. Control line is not growing like our R/C brothers, but it sure ain't dead either and I'm glad to see people like Hazel Sig and Maxey Hester hang in there for us. We in control line thank you.

A peek inside: The following year I attended the contest again and found the kit just about ready to go except for the instruction booklet. Mike was very hard at work trying to complete the kit, but asked if I would like to review the kit without it. As you can see I didn't say no. The box was all sealed up when Mike gave it to me and this bothered me as it lay there in the back of our T/A. But as soon as I got back to the motel, the kit was taken in before my clean undies. Shirley, my wife, always showers before me anyway, so the kit ws opened as soon as the water started to trickle. Don't you just love to handle all the new parts of a kit and visualize how they go together? Me too. Well all these parts were top notch, from the parts bags to the foam wing halves. Of course you can't forget Sig's balsa as it is always the best in town.

The wing halves were cored a little differently than most. The hot wire was taken in from the leading edge and from the trailing edge in order to get the two sections of the panels cored out. They included some strips of 1/32 X 1/2 inch balsa wood to fill in the slices the wire made. These strips work real well and are easy to install; they give strength to these areas and hold them straight while planking the panels. The wing also has 1/s inch poplar plywood spars installed. I planked the wing halves with the 1/16 inch balsa included, after gluing them together with Sig Bond. Core-bond was used for holding the planking to the cores. The supplied bellcrank, leadouts, and pushrod were installed next. Sig includes more in this kit than most I have seen. If fact, I always have a, few parts left over when building one of their kits. I used Sigs 5-minute epoxy to hold the wing halves together. After this was completed, I built and installed the flaps, hinges, flap horn, and the pushrods. I left the tips off till last as this holds down the dings and dents to a minimum.

When I got to the fuselage I found that the fuse sides had to be cut out; this is very good cause they end up straight. How many times have you tried to align kit fuse sides that look like two bananas. It's a little hard to keep your thrust line straight or whatever. I usually replace them as there isn't enough left to use after recutting them. The formers and ply doublers, by the way, are die cut.

The trailing edge of the stab is precut and is a good way of aligning the foam cores that form the stab. Be sure when building in this area that all is kept light. It takes twice as much to counterbalance. I used some scrap balsa for extra strength in the rear of the fuse since the Magnum has a very large stab and elevator. This fact was brought to my attention after I dropped it on the floor while trying to show a kid some off-road tires and broke the rear fuse.

It's a good thing that the plans are well done, because when building in a hobby shop like I do, everyone and his brother wants to see the new kit. The plans were turned back and forth so often they began to fade. I decided to use an iron-on covering as time was short and I wanted to take the Magnum to the Nats. Jerry Caldwell and Al Pitts were conned into helping with the covering. They're in my club and I felt this would be good training for them and all who were watching the proceedings. I'll paint the next one! The iron-ons just don't have the strength that is neeed for the control sur-faces. Yes, there will be a next one and I am going to power it with a Jim Greenaway .60. His engines have impressed me for quite some time, so he is getting one ready for me right now.

To quickly sum this up so you guys can leave the reading room and be with the family, I'll offer the opinion that the kit is very well done and worthy of even the biggest 'stars' attention. So thank you Sig for backing control line and presenting us with another fine kit." 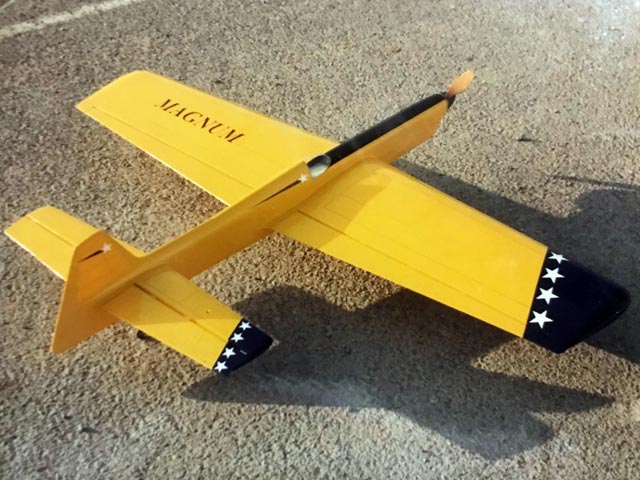