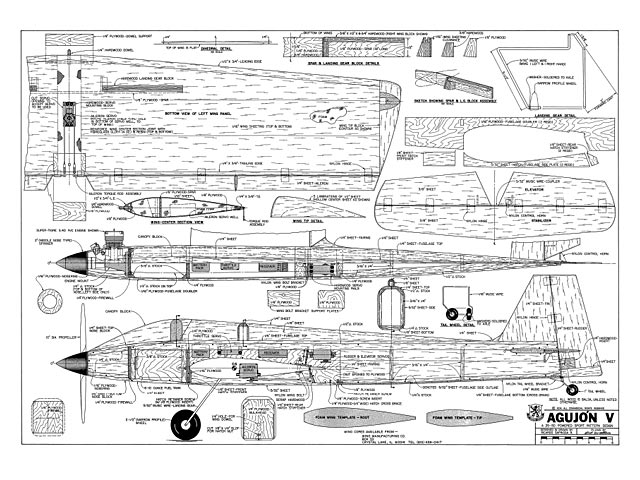 Quote: "From Costa Rica, comes this .35 to .50 cu in sport / pattern design. This presentation of model five has all the good flying characteristics the designer was looking for - try it and we feel you'll like it also. Agujon by Ricardo Saprissa R.

The idea for Agujon started out as a result of a rather spectacular crash while flying a Top Flite Nobler (oz525) at a control line exhibition a few years back.

Luck came into the act as I noticed that the wing, stabilizer, and elevators of the ex-Nobler were whole and almost intact between a pile of splinters and pieces from the fuselage. Of course, the entire incident was blamed on the gusty wind prevailing at the time of the exhibition, making it especially difficult to exhibit the flying of control line models. The fact that there was little wind apparent was not commented upon.

That did it! A more streamlined model was needed for wind penetration in this windy mountain valley of ours. So, to avoid as much frontal area as possible and achieve a penetrating profile, a very slim fuselage had to be designed; hence, the name Aggjon, meaning 'big needle' (from 'aguja'; Eng. - needle), to be fitted to the Nobler's leftovers.

This time, however, the new model was not to be limited to the flying space of 60 foot lines but instead was to carry a four function radio in its belly. This way the basic outline of the model was laid down and the construction was designed around the spinner, engine, radio and gas tank so that these components would fit with absolutely no space wasted around them; a snug fit!

Thus, the cross section of the fuselage was kept at an absolute minimum, the thrust line as near as possible to the wing chord centerline, and all settings at zero degrees. Directly to the firewall would be bolted a modified Veco .50 with a Kavan carburetor, swinging a Tornado three bladed 10 x 6 prop on a Veco needle nose spinner, and drawing fuel from a Sullivan SS-8 tank. The landing gear was of the conventional type anchored to the wing, plus wheel covers. The canopy was homemade from 1/16 acrylic and located on the fuselage as far forward as practical. This was Agujon I. Just so as not to deviate from the racy looks of the CL designs of the time, the vertical fin and rudder design was borrowed from Yuri Sirotkin's Spacehound (oz1826) CL stunter, FAI World Champion of 1964.

Flying the Agujon was sheer delight from the very start. It had characteristics of its own that nobody here had seen before. For instance, flared for landing on high idle would touch down tail wheel first and gradually lower the mains for a straight landing run before taxiing to the pit. This was called a 'one point landing!'

Naturally, all things change with time and the Agujon was no exception. However, now in its fifth modification, main changes are mostly structural excepting the cabin and the vertical fin and rudder, and of course, the wing. Now, Agujon V with a strong wing (although thinner) with a hot Schnuerle ported .40 with a tuned pipe, and an all-up weight of not more than 5 pounds, will perform incredibly even to the experienced flier. Try it.

Construction of the Agujon should not be difficult as it is designed for conventional and fast building methods. Strange as it may seem, the design was executed expressly behind the 2 in diameter needle nose spinner for looks, as this is what represents the needle principle of the design. If you are not able to procure a needle nose spinner right away, any other spinner will do as it will only alter the looks but not the flying.

As with most construction projects of this type, it is most practical to start by studying the plans thoroughly, continuing by listing the materials required and acquiring them. Carefully select all the accessories..." 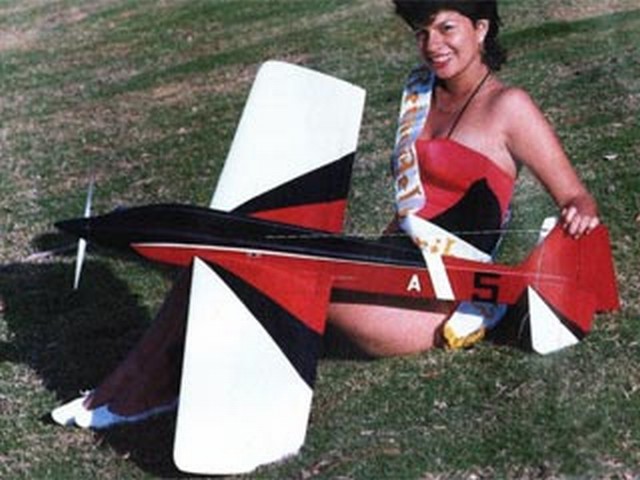