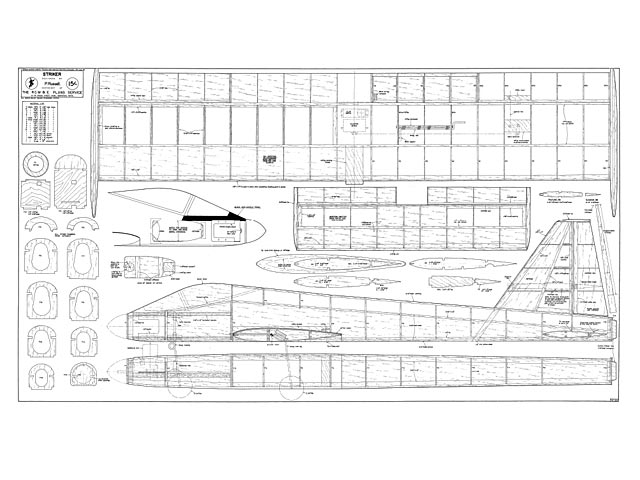 This model aeroplane is intended to give a pilot of reasonable experience but perhaps only moderate ability, a chance to do reasonably well in aerobatic competitions. A season of not-very-serious contest activity, using not-very-suitable models, led to the conclusion that it is a good deal more difficult to do the schedule accurately than was first anticipated.

The main snags encountered were:

1. Difficulty in maintaining, headings in some manoeuvres.
2. Barrelling and variable rates of roll.
3. Inaccurate exits to manoeuvres.
4. Wobbling about in windy conditions.

Watching some of the top men in the business suggested that some of them were having trouble with these things too, judging by the number of corrections being fed in during manoeuvres. With all this in mind, at the end of last season, a serious think was initiated with the idea of producing a flying machine that would give as much help to the pilot as possible.

The following features seemed to be desirable:

(a) a long body with more than average side areas balanced about the CG, with no engine offsets, (see snag 1).
(b) to help with snag 2, a short stubby wing with no dihedral and no aileron differential.

The latter might well have made it easier for novice pilots in Cirrus Moths to do co-ordinated turns, but, like the 'Frise' aileron, it's function is to produce yaw in the direction of the applied aileron, a feature clearly out of place on an aeroplane required to do axial rolls. To improve point 3,

Finally, to minimise the wobbling about in windy conditions, or gust sensitivity, as we say in the trade, a relatively high wing loading (and plenty of power) which will have a side effect in aggravating the current tendency to long flat approaches, with considerable float before touch down. Because current models are aerodynamically clean, but relatively heavy, the margin of speed above the stall that you must have to make a safe approach, takes a long time to dissipate during the flare, due to low drag and high inertia. In spite of this, top pilots can consistently beat a touch-down scatter of 50 feet, but in doing this, they sometimes have to 'plaster it on' at well above stalling speed. You can get away with this if the undercarriage is well designed (and strong enough) but most judges take the view that this constitutes running aground, rather than landing, and they deduct points accordingly.

All this led to the conclusion that flaps should be used. Flaps increase both lift and drag, in varying proportion, according to which type you use, and this means that the extra lift allows a slower approach (but still maintaining the safety margin we mentioned), whilst the extra drag enables you to come in steeper, making it easier to judge the touch-down spot. Perhaps most important of all, the extra drag reduces float before touch-down. For this reason, split flaps; which give high drag compared to lift, and are less prone to flutter than plain flaps were chosen.

The result of this cogitation was Striker, built in two months and with a third, a fourth and a nineteenth in it's first three comps. which, for this pilot, is good. Ironically, all six landings were lousy, and only three of them were in the small circle, but this just proves that I am an erratic pilot, not that the flaps are no good (honest!). Anyway, if you decide to have a go, you won't find anything unusual about the structure, which has proved entirely reliable over the first 330 flights. Though not exactly a beginners model, it is quite viceless, and anyone who has flown a few multis should have no trouble.

I won't presume to tell you how to build it, save to say that the fuselage is built upright using the full-length bottom as a jig. The wing cut-out is removed when the fuselage is complete except for the planking, as it is easier to line up the wing fasteners with access from the top. The wing and tail are blocked up on a flat board, in the usual way..."

Quote: "Hello Steve, Hereby, I will try to send you the plan for the Striker who I first read about in the Radio Control Models, November 1968. Since then, the plan has regulary been taken out of the shelf and studied and the article has been read. Maybe, it is time to start cutting some balsa. Yours sincerely," 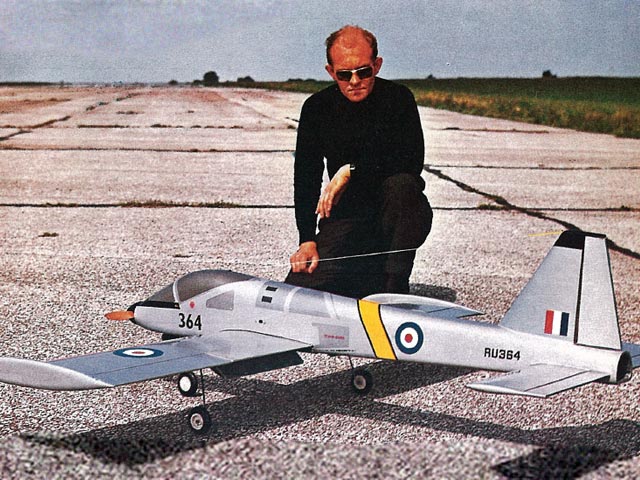 Hi Mary and Steve. Aaaaah a British Striker... This model makes a wonnderful nice and simple pattern ship for the ever-growing RC1 or F3A Retro meets... Cheers,
Pascal - 19/02/2016
The balance point was not shown on the original plan although I see it has been added to the OZ print. In a subsequent article the designer recommended it be between 35% and 38% of the wing chord (4.26" - 4.63" from the wing leading edge).
RFJ - 15/08/2019
Add a comment