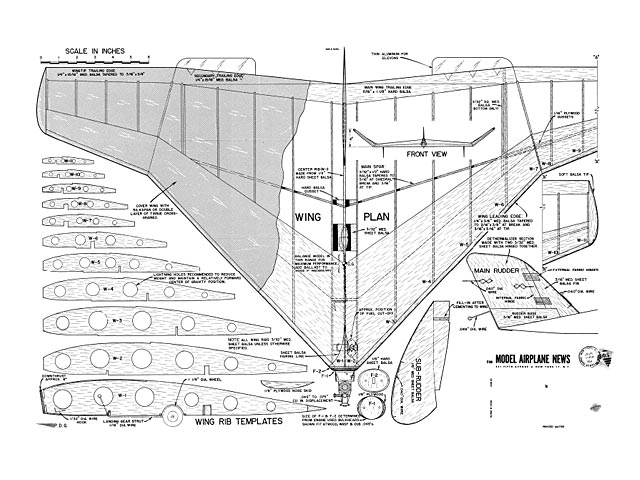 Quote: "The flying triangles have made their mark in the full scale air world. As models, they offer many novel possibities and, of course, no fuselage, tail to build. Half-A Delta, by Paul E Del Gatto.

Within the last few years Delta configurations have been utilized with increasing frequency in the controlling phase of model designs, and in many instances with considerable success. Having enjoyed some measure of success in the field of controlling Deltas, our own enthusiasm was sufficiently aroused to venture into the abysmal void of free flight Delta design.

In other words, we were venturing into the unknown, and fools that we are, we loved it. Yet we weren't so foolish as to venture into in without taking some elementary precautions, so we set about to design a hand-launch Delta approximately half the size of what we estimated would be the size of the free flight gas version. This proved to be a sensible approach for, as it turned out, we were able to foresee several modifications, which, when incorporated into the gas version, would produce a better performing model.

The lack of directional stability in the glider was immediately detected as well as some difficulty in obtaining longitudinal trim. Of course, the latter could be attributed in part to the less stable airfoil cross section obtained through the use of the sheet balsa construction.

To rectify the situation we added a center rudder in addition to the underslung rudders to obtain the needed directional stability. Then, too, we increased the dihedral of the tip panels from 1-1/2 in to 2 in, which by virtue of the toed-in dihedral break, increased the negative angle of the tips, aiding us in reducing the longitudinal trim sensitivity. In effect, the raised rips also added to our rudder area, necessary for directional control, and to our lateral stability which, while satisfactory to begin with, might give us added difficulty in a free flight gas with its torque problem.

After these modifications were made and the hand-launch glider version was once again flown, performance was considerably improved and on the strength of its performance we felt assured of the model's success, so we quickly got rolling on drawing up the design of the free flight gas version. Construction was to be simple, strong and efficient, without any emphasis on ornamental doo-dads of fixings to clutter it up.

To see just how simple it is requires only a quick glance. All one has to do is leave off the engine, firewall and landing gear and what you have got is a functional wing. Come to think of it, that gives us an idea we haven't exploited yet: its possibilities in the towline field.

Simmering down our enthusiasm for the moment, let's review some of the points of interest in the construction of this model. Beginning with the wing ribs, it is suggested that the lightening holes indicated on the ribs be cut out unless you plan to use..." 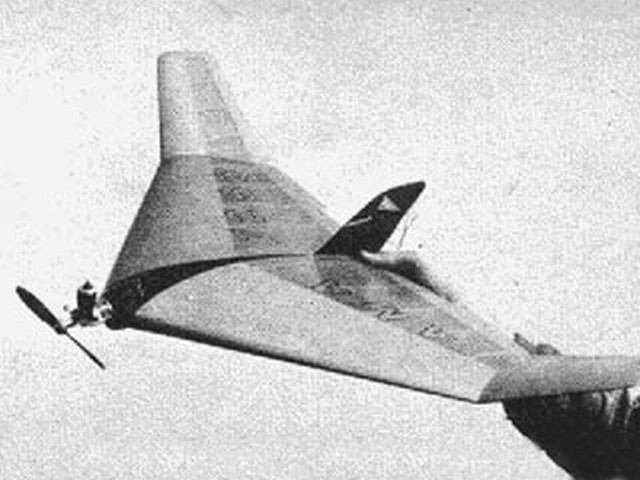