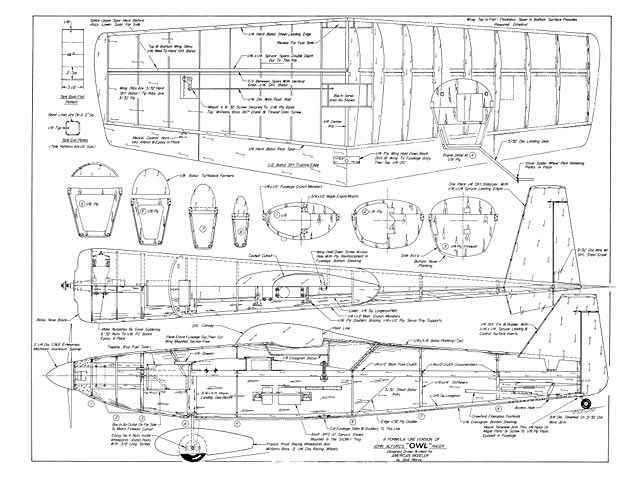 Quote: "THE OWL RACER, designed by George Owl and built by John Alford, was featured in the April 1971 AAM. This time we present a Formula I racing version of this most unusual aircraft. Its name is Pogo.

The nose cowl treatment makes the difference. The designer departed from the usual cheek cowls and employed a full-bodied wrap-around cowling which actually will contribute thrust in flight. The miniature racing version retains the full-bodied engine cowling shape of the original and the only deviations from scale are those required to meet the NMPRA Formula I racing rules.

The ship is very stable in flight, showing no tendency to mush or stall in high-speed pylon turns. It gets up on the step and grooves. If a good engine is up front, it won't be second best!

Construction: The fuselage is built on an inverted crutch, the lower half built up completely on the 1/4 x 1/2 in crutch members, including the nose planking. When this has set up, remove the entire fuselage bottom half, and then add the top formers and planking. Begin construction with the ply frames, which are cut in separate bottom and top frames.

Cut the fuselage side panels and 1/32 ply doublers to the phantom outline shown. Cutting them to the finished fuselage shape will result in too shallow a fuselage. Assemble the sides by contact cementing the doublers to the balsa side panels, being sure to make a right hand and left hand. Next, glue the longitudinal and vertical stiffeners in place. Cut in the cooling exit hole in the right hand side plate and add the 1/32" ply air duct before fuselage assembly.

With all the frames cut to shape and the side assemblies completed, begin the fuselage assembly by pinning the 1/4 x 1/2 crutch members in place on the plan. Glue all frames in position and, after the glue has set, cement the sides in place, leaving about 1/32" of the crutch exposed. Next, add the 1/8 x 3/8" soft balsa planking in the nose area. Then add the landing gear blocks and the 1/16" cross grain bottom sheeting back to the rudder post. This should complete the entire lower half of the fuselage. Let this set for at least a day before picking it up.

Next, add all top formers and proceed with the top planking. We planked ours back to the rear cockpit frame and used 3/32" sheet for this. Add the cowling nose blocks, rough the spinner area down to size and then mount the engine and spinner in place to assist in positioning the 1/16" ply spinner plate on the nose blocks. When this is done, remove the engine and shape the nose blocks into the spinner plate. We used the small drum sander on our Dremel tool, which did this job quickly.

By now, the fuselage is just about completed so, after a good smooth sanding job, paint on the first coat of sealer.

The flat bottom airfoil doesn't have a pat technical explanation, but we have had a lot of experience with it. Jim Kirkland's Shoestring of 1965 was the first Formula I ship to use it. Joe Foster used it on his Rivets, National Champion in 1967 and 1968. We were hooked on the wing section after flying two of Joe's Rivets and decided to continue with it on our Ole Tiger. We've built up a lot of flying time with this section and can recommend it without reservation, both in high and low speed characteristics. Full elevator turns can be made at high speed with no tendency to stall or mush and lateral control is excellent in a fully flared landing attitude.

Another welcome characteristic is ease of building. The first step is to preglue and sand the 1/16 medium balsa skins. We recommend taping the 4 in sheets together, then reversing the taped assembly. Open each joint and lay a bead of coating resin in place. Spread the skin out flat and wipe the excess from each joint. The taped side will be the finished side and will require very little sanding to finish.

Cut all ribs and put together the right and left hand aileron bellcrank assemblies.

Pin the lower skins to two building boards butted together at the wing center line. With the center and two tip ribs in place, jack up the end of one board until a straight edge just touches the top of each of the ribs. This will provide all the dihedral in the bottom surface and the top surface will be flat from tip to tip. Remove the ribs and begin final assembly by gluing the lower 1/16 x 1/4 spruce spars in place, adding the half-span 1/16 x 1/4 spruce doublers. (Do not break the spars at the center line; let them run straight through, tip to tip.) Add all the ribs and then the top spar with its half-span doubler. Install the aileron bellcranks with their pushrods in place. Addition of the rear spar, top skins, leading edge and the sheet trailing edge will complete the basic wing structure. Wing construction to this point takes four hours, and it is basically finished. (Another strong point for this airfoil.) All that remains is shaping the trailing edge, adding the tips and sanding everything to shape. Add the fiberglasi cloth strip all around at the center section joint and the wing is ready for final finish.

The tail surfaces are rather straightforward and need no description. At the leading edges, we added 1/16 x 1/4 spruce strips which seem to stop the nicks and gouges caused by gravel thrown back by propwash..."

Hi Mary/Steve - Here is Bob Morse's Pogo from American Aircraft Modeler magazine issue 08-71. The model was featured on the cover as shown. 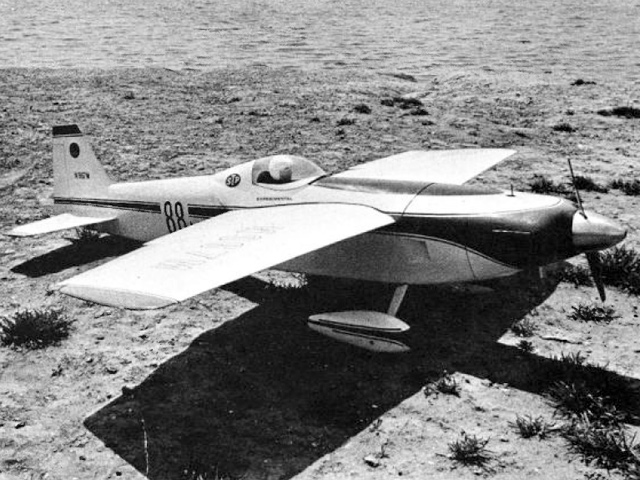