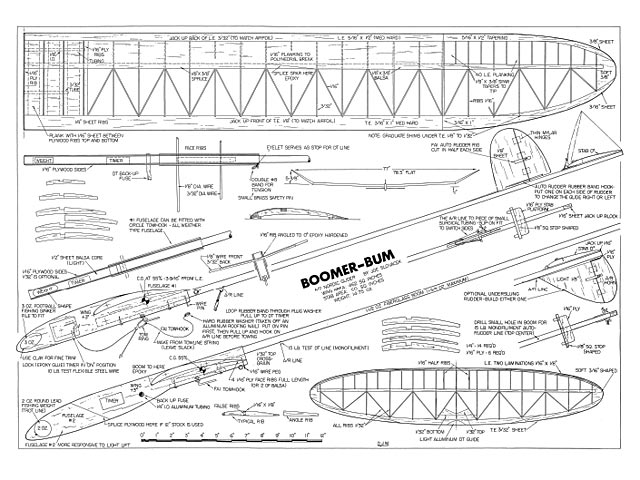 Quote: "The Nordic A/2 you didn't fly this summer was the same one you didn't build last winter - here's one that's a proven winner for you. Boomer Bum, by Joe Slovacek.

All you glider pilots gather around and let's get the 'uppers' and 'downers' going in the right direction. The first thing off the line is - no matter how many maxes that the Boomer Bum can string together - it simply is not that three minute dead-air machine that happy modelers dream and jaw about.

But read on. You don't have to max every time to have a winner. Any towline jockey who can run his weight in salt knows that a good, well trimmed A/2 Nordic glider can sometime hit the ground in less than a minute. This is commonly refered to as a real zapper on the downside. It's always back to that old common phrase - if you're off on top, locked in a brick-lifter, the glider can be a first class rat trap and still look like an international champion.

I'm sure that we will all agree that any bird looks happy in a riser, but let's take a realistic look at the 'dead-air' scene. When we say dead-air, you may jump into that bubble with both feet and yell : There is no such air! Let's not debate! We'll say, as close as we can get to still air, or dead-air, meaning stable air with no violent thermal activity. In the early morning, or sun-down kind of flying conditions.

Based on the length of towline allowed under current FAI rules, most gliders can get only 164 feet of altitude, if they are towed up directly above one's head (discounting zooms). Really that's not so very high if you need that last max to win. We'll all agree to that.

We know that a 3-minute max flight is usually recorded as 180 seconds (or should be). Now let's say that we've made an excellent tow and our 'Boomer Bum' is on top of the line, at 164 feet. Fine! Simple figures say that if we're going to be airborne for 180 seconds (3 minutes), our sink rate cannot be more than .911 feet per second. Coming down at the rate of a little less than one foot per second seems easy enough to do - right? You're right, it's easy enough, until the flag drops off the hook and the fat guy looking at the watch isn't your buddy. So once again the air turns blue as the glider makes a beautiful landing at 2:20. But that's not too bad (in Texas).

Let's glide it another way. Figuring that the average string artist or A/2 contestant is about 5 ft 8 in tall, when holding a glider with arm cocked above his head, he should be about 7 ft tall, and so a gentle hand launch from about 7 ft elevation should produce a flight of no less than 7.7 seconds. If it's a younger flyer of lesser stature, hand launching from the 6 ft mark, the ship should sail straight out for about 6.6 seconds. So what does all this prove?

These examples are merely to give you some idea of what kind of performance one should expect from a so called '3 minute A/2 glider'.

If there are such things as 3-minute A/2's - what might one look like? It would prob-ably have a fairly small stab, with a long stretched out tail moment arm. A high aspect ratio wing with lots of complicated internal bracing. It should feature a circle tow hook, complete with zoom launch features and more than likely very sensitive to the CG position.

So, it takes a little longer to build this type of bird. If it produces super results, why doesn't everyone take a little extra time and build one?

Well? Maybe it's because the old seasoned pilot takes a squint at the sky and says 'I wonder what the weather will be like tomorrow?' It seems rather simple what this whole thought is boiling down to. We design model aircraft to fly in only one kind of weather. In a way, yes, but not exactly. If you can make some rough judgements on what the typical weather condition would be nationwide, that may be a better solution. It may be calm in California and windy as the devil in Oklahoma. Now what? In our opinion there's not but one perfect solution. You simply build a whole squadron of A/2 gliders. Long stretched out, high aspect ratio jobs, capable of that hovering, flat glide. These are for calm weather. The short nosed, low aspect ra-tio types with lots of dihedral, a forward CG and a tough fuselage. The wind machines. A different glider for every conceivable weather condition. That ought to do it!

Wait a minute, I think we forgot the one big thing. Time! It's sad but true, the one big thing that comes into play in this equation with most modelers. They work in the salt mines all day, and this leaves just a few happy hours for squeezing glue..." 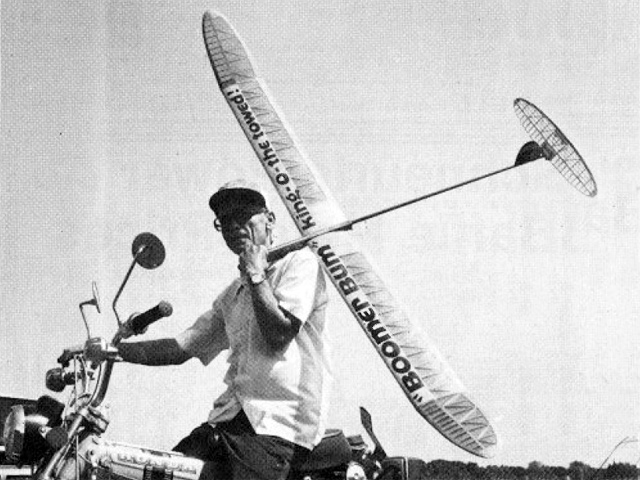