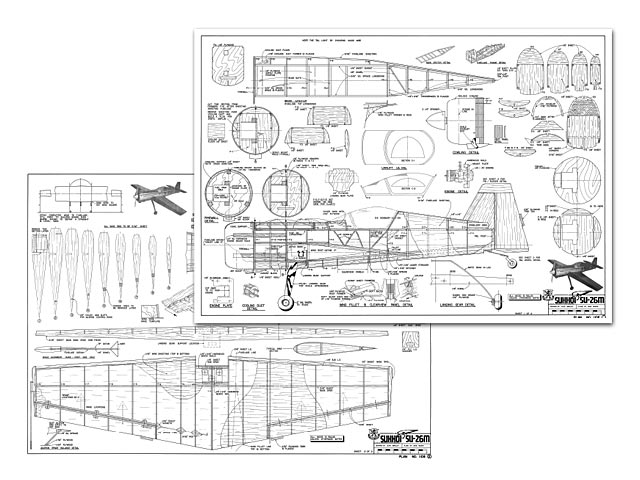 Quote: "The model design was based on the excellent 3-view drawing, prepared by Pat Lloyd from original Soviet material, and a study of the 80 or so photos taken by the author at South Cerncy. It, therefore, represents the late SU-26M version with the revised canopy, slightly modified wing and tail tips, and with wing root fillets.

The prototype is powered by an O.S. .25 FSR, mainly because O.S. produces a helicopter silencer for this motor that fits nicely within the cowling. The plan proved rather deceptive in that the finished model appears somewhat larger in the flesh than the drawing indicated. A good .35 or .40cu. in. sports engine would give better vertical performance. This is a feature of the full size flight envelope that the .25 cu. in. engine could not quite reproduce. Possibly the ideal power plant would be a .40 cu. in. 4-strokc such as the O.S. .40 Surpass but the rocker box will not be cowled, and the center part of the firewall and former Fl will need to be located slightly further aft. A standard 6 oz. square or round tank will fit between the bearers and fuselage side. All the R/C gear is located on or in front of the C.G. obliterating the necessity for nose-weight.

One important point that may not be appreciated from a casual glance at the plan, is that the model is 'one piece': R/C access is through a top deck hatch, there are two reasons for this option. First, with a mid-wing and fairly thick root section, a one piece bolt-on wing would have made for a weak fuselage. The alternative of using two piece wing panels slid onto dowels presented difficulty around the wing fillets and constructing a neat mating joint on the wing underside, due to the bulkhead curvature. The latter system would need an access hatch anyway.

Second, any form of separate wing, on a small model, adds extra weight through the extra structure required. Consequently, the wing loading slides upwards to the detriment of the flying characteristics. The author found no difficulty handling the model during construction, despite building in a restricted space. Just keep in mind that it is one-piece, and don't turn around or 'fly' the model without thinking first. Storage and transportation should present little problem, as the design is smaller than many control-line stunters of a few years ago. which were nearly always one-piccc. with little thought otherwise!

There are a few minor deliberate deviations from scale, most of which could be changed by the fastidious scale 'nut'. The most obvious is the reduction in aileron size and hinging method. The full size has huge ailerons which if reproduced at this model size, would make it very twitchy. Washout, though not scale, has been included in deference to the stubby tapered wing planform, to make the low speed handling characteristics easier..." 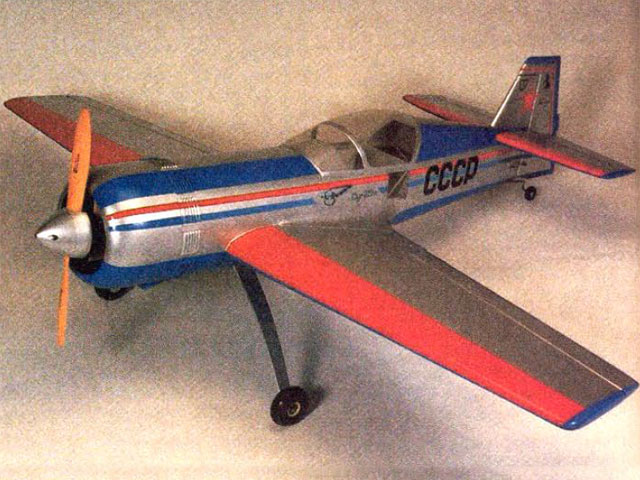