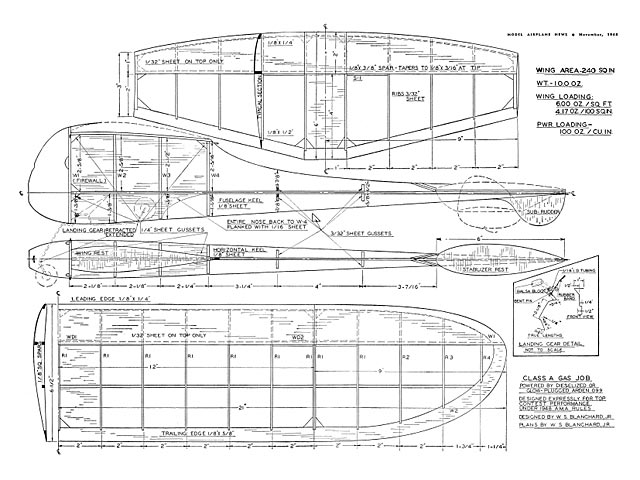 Quote: "Here is a slick Class A job, tailored for real results under 1948 rules. Pizonia, by Woody Blanchard.

PRIOR to the 1948 AMA rules, models powered by the smaller of Class A engines were greatly handicapped. Small models having the former required wing loading of 7 oz per 100 sq in were incapable of competing with the larger .199 powered ships. This was due to the extremely low Reynolds numbers encountered with the smaller ships.

Under the new rules there is no required wing loading, and the power loading has been increased to 100 oz per cu in piston displacement. These changes place a new light on things, and the little ships are now ready to give the larger A's a mighty hard time.

Pizonia is the culmination of several previous designs all aimed toward the same goal: a top contest Class A design using the Arden .099 engin?. Performance is nothing short of won-derful. Total weight is 10 oz., which is the minimum allowed. Wing area is 240 sq. in., affording a wing loading of 4.17 oz. per 100 sq. in.! This low wing loading allows the thin airfoil used to operate at a very low angle of attack, hence drag is low, and climb is spec-tacular. The glide is extremely flat, and moderately slow.

In the very late evening, the model con-sistently turns in well over 2 minutes on a 10 second engine run. The slightest thermal will waft the ship away, due to the low sinking speed, hence a dethermalizer is strongly recom-mended. This will be no handicap, since 1 oz. of dead weight had to be added to bring the original model up to 10 oz. Now, let's get to work and build Pizonia.

Soft balsa is used throughout, except where otherwise noted—this is very important. Don't worry about strength; the original model has flown head-on into stone dormitories on two occasions, and has dropped out of numerous trees. The damage to date (75 flights) consisted of several broken props and some torn Silkspan.

FUSELAGE: Construction of the fuselage is very simple. First, cut out a side view of the fuselage of 1/8 medium sheet balsa, and mark the centerline and former positions in pencil. Then cut out two horizontal keels from 1/8 sheet balsa and cement one on each side of the vertical keel, along the centerline. Now cement the firewall and formers in place. Be sure to cement all gussets in place, and use plenty of cement, especially around the firewall. Mount the engine in place, and cement the nuts to rear of the firewall. (This will allow easy removal of the engine for cleaning, etc). Cement the stabilizer rest and sub-rudder in place.

Next, bend the landing gear as shown. Use a 3/4 length of 1/16 inner diam. brass or aluminum tubing for a bushing. Solder washers to landing gear, holding the gear in the bushing. Solder closely, to prevent side-play. Cut out the small balsa landing gear mounting block. Cement the bushing to the block, and wrap thoroughly with thread. Next, cement the block to rear of the firewall. Mount the block so the bushing is not quite horizontal. This allows the wheel to retract slightly to the side of the fuselage keel, and a great deal of strength will be conserved. Bend a straight pin or use music wire for the rubber-tensioner attach-ment. Use plenty of tension in the rubber, and anchor the other end to the fuselage keel. You will find that in the extended position the landing gear has no tendency to retract. Once the slipstream blows the gear back a short distance, the tensioner takes effect and pulls the landing gear snugly up in its well. Use a rubber tired wheel of approximately 1 to 1-1/2 diameter.

Plank the entire nose of the fuselage with 1/16 sheet, fitting carefully, and using plenty of cement. This must be done with the landing gear extended. When the planking has dried, carefully cut away just enough to allow the gear to retract.

The engine cowling on the original ship was built up of sheet balsa and small blocks. However, you will probably find it easier to carve the cowling out of a single block of soft balsa..."

Mary, Please find attached another gas FF plan by Woody Blanchard. Great name, as we've come to expect from Woody. Very advanced for 1948 ...Many thanks.

Article.
Alternate version of the same plan, thanks to tri-pacer. This appeared in Aero Modelismo, 1949. Includes wing ribs and some formers. 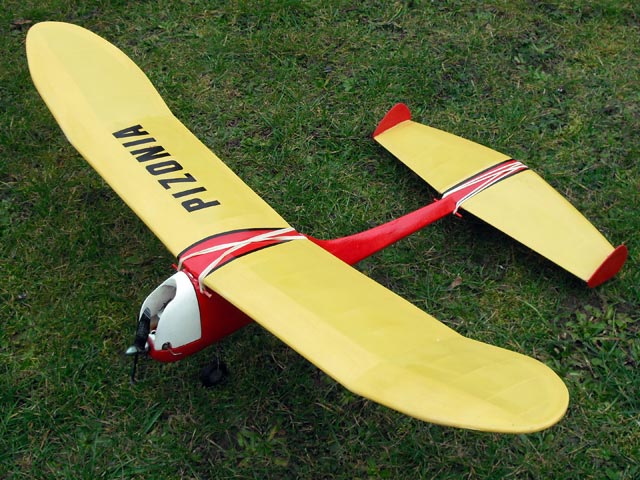