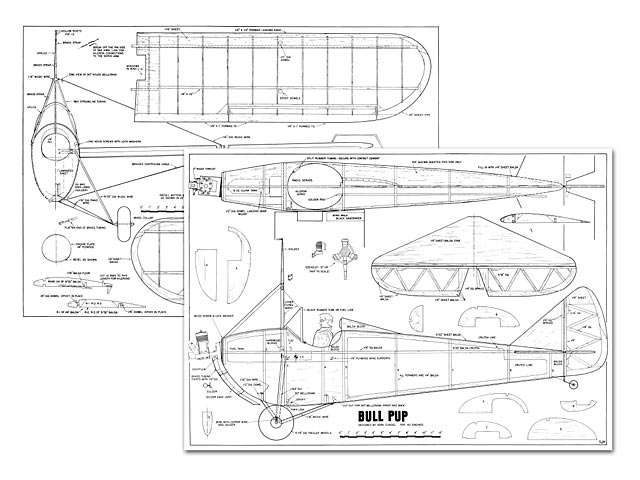 Quote: "Some years ago I had acquired a collection of Berkeley kits (now out of business) and was intrigued with a kit called the "Buhl Bull Pup." It was 1-1/2in to the foot and I thought it would be very interesting to see how this aircraft design would work out in a larger R/C size. With pen in hand I started with a few mathematical equations and before I had realized how far I had gone, I was constructing it in 2-1/2in scale. I am somewhat lacking in the history on this airplane, but I did find out that it was one of the classic planes of the golden age, built around the 1930s. It had a very unique sheet metal fuselage and tail surfaces. Most of these planes were finished in natural aluminum wherever metal skin was used and the fabric wings were sprayed aluminum to match. I chose the color scheme because I remember seeing one of these planes published in Sport Flying some years ago. It was of identical color, using a dark blue fuselage, and cub yellow for the wings, stabilizer, and elevator. It would also be a very attractive plane in chrome MonoKote.
As you can see by the photos, it's not a hard or complicated plane to make. I started by building the wings complete, including the root rib, and then cutting out the section to install the window assembly. If you first build the entire wing, you can be assured of a true wing before cutting into the root rib for this construction area.
You may have noticed that I have added some improvements in the wing since some of the photos were taken, as I found it was necessary after the first tests to insure a more rigid wing panel. Some builders might wish to eliminate the wing window, but I suggest it be used as it was one of the outstanding features of this airplane..." 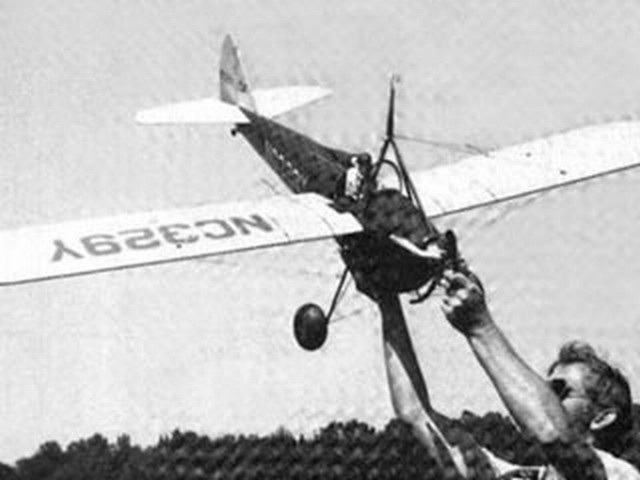